The Green aren’t so mean after all 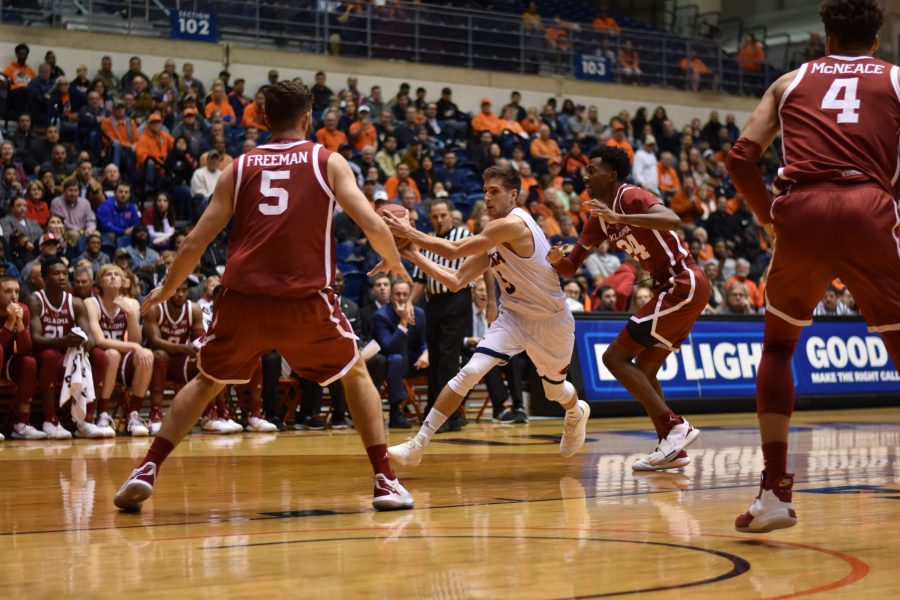 Guard Giovanni De Nicolao dribbles past some Oklahoma Sooners on his way to the rim. Jack Myer / The Paisano

The UTSA men’s basketball team, seeking their first conference championship since joining Conference USA (C-USA) in 2013, is currently undefeated in conference play and holds the lead in C-USA. Overall, the team got off to a slow start, losing seven of their first 10 games, but they headed into the game on January 12 against the University of North Texas (UNT) on a six-game winning streak and an overall record of 9-7. UTSA led by as many as 10 in the second half, and after six lead changes and a late UNT surge, UTSA prevailed 76-74 in a nailbiter over the Mean Green, improving their overall record to 10-7 and their conference record to 4-0.

The ‘Runners’ seven-game win streak was led by sophomore guard Keaton Wallace’s average of 33.8 minutes per game and junior forward Atem Bior’s 5.6 rebounds per game. Over the span sophomore guard Jhivvan Jackson led the team with 60 free throw attempts, making 50 of them. Jackson also shot the contested jump shot with 1.6 seconds left to play that gave the ‘Runners the victory over the Mean Green on Saturday afternoon and finished the game with 17 points. Senior forward Nick Allen set a career high of 20 points win against Rice, and contributed 16 to UTSA’s winning effort against UNT. The ‘Runners’ as a team have put up 78.7 points per game over their seven-game win streak, 12.7 points more than their opponents. The January 12 win snaps a four-game losing streak against the Mean Green and gives the ‘Runners their best 11-game stretch in 30 years.

Looking ahead, the remainder of UTSA’s schedule is solely against in-conference opponents, so each game is crucial to the ‘Runners’ bonus play hopes. UTSA looks to continue building momentum in these games to propel them into the bonus play tournament beginning on Feb. 23.

The Roadrunners will need to see continued performance from team leaders Jackson, Allen, Bior and Wallace. This young and talented core should carry UTSA through the remainder of this season and in the future.

The Roadrunners hope to keep the streak alive, Jan. 17, at Middle Tennessee at 6:30 p.m.