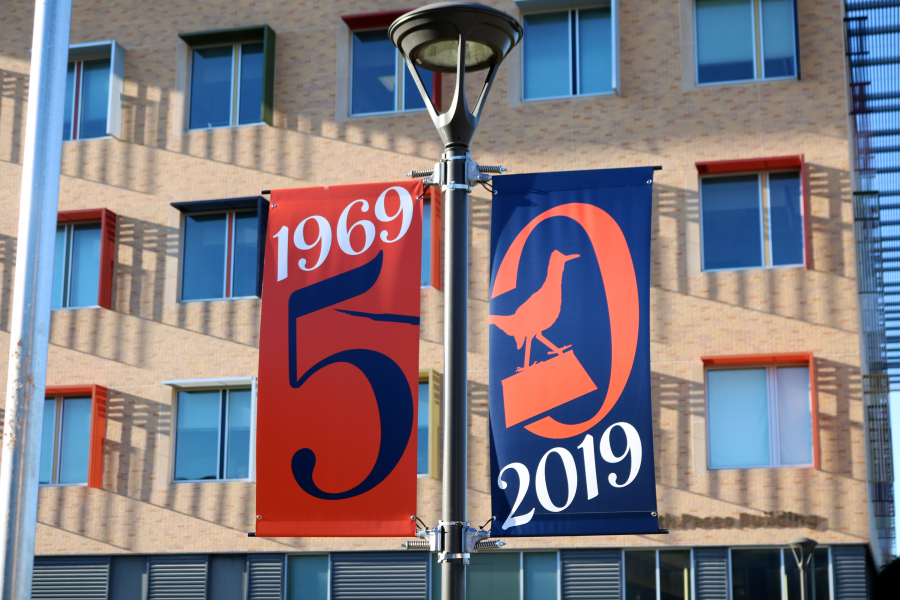 Special banners made to recognize anniversary. Ellyson Ortega / The Paisano

Year of events planned to honor the university’s founding

UTSA will be hosting events throughout 2019 to celebrate the 50th anniversary of the university’s establishment.

“UTSA was established on June 5, 1969 when Texas Governor Preston Smith took the Texas House Bill to create UTSA and signed it into law on the back of Representative Frank Lombardino of San Antonio, the ‘father of UTSA’” said Marjie French, UTSA vice president for external relations and chief development officer.

A birthday celebration at the Alamo involving the reenactment of the bill signing will take place this summer and the university will also celebrate the anniversary at the Asian Festival, Diploma Dash, the UTSA Day of Service, Fiesta and Homecoming.

“In September, we will host a special 50th anniversary alumni gala at the Tobin Center for the Performing Arts,” French said. “Proceeds from the gala will support student scholarships.”

The Office of the President will sponsor a monthly series, the UTSA 50th anniversary Scholar Speaker series, beginning in January that is free and open to the public.

“It will engage the community in interesting topics ranging from music and brain health to cyber security and sustainability,” Marjie French, UTSA vice president for external relations and chief development officer

Some students express appreciation for the year of celebrations the university will have this year.

“I’m glad UTSA is celebrating for the whole year, it is a big milestone,” Elijah Mazuca, a senior philosophy major, said. “It’s good for students to celebrate and be proud of their school.”

“The Office of University Communications and Marketing has also been working very hard on a variety of projects to prepare the university for the year-long celebration,” French said. “Over the holidays, UCM placed a large 50th anniversary banner on the Baurle Road Garage and on the Ximenez Avenue Garage as well as colorful 50th pole banners on Main and downtown walkways.”

Since the university’s establishment, UTSA has grown from having 671 students in 1969 to 32,101 students in 2019 and has also increased the number of campuses from one to four.

“Over the last 50 years, so many people have contributed to developing UTSA into the university that you know today,” French said. “Acknowledging the university’s rich history with the community and the milestones that Roadrunners worked so hard to achieve led us to designate a full year for our anniversary.”

For more information on UTSA’s 50th anniversary and the events being held, visit www.utsa.edu/50. To share photos and memories of UTSA on social media, use #UTSA50.