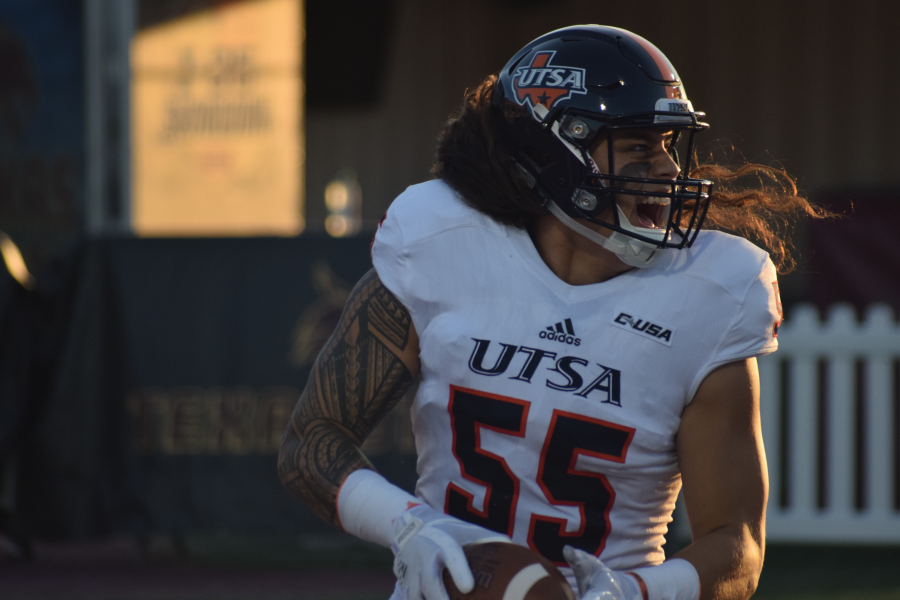 Josiah Tauaefa, UTSA alumnus and former Roadrunner linebacker, announced that he will forgo his senior season and enter the 2019 NFL Draft on Dec. 28 via social media.

Tauaefa was named honorable mention All-Conference USA by the league’s head coaches in 2019, was the first Roadrunner to achieve the Freshman All-American Team his freshman year and is one of the 10 semifinalists for the Butkus Award, which acknowledges the nation’s top linebacker.

“It was a tough decision because so much went into it,” Tauaefa said. “I’m going to miss playing with those guys and that brotherhood, but I feel like I made the right decision.”

Being the biggest inspiration to the middle-linebacker, Tauaefa’s family has an extensive background in sports. “My dad, all my siblings, my aunts and uncles played sports. [There was] plenty of motivation to carry that on and be like them,” said the Dallas native.

As a student at UTSA, Tauaefa was a communication major and hopes to use what he learned to preach and minister Christian gospel later in life. “Football is just the platform that God has allowed me to use to get involved with organizations, volunteering and being able to bless other people who might be in need,” Tauaefa said.

The former UTSA linebacker appreciates his experience and everything he learned at UTSA. “[The memories] mean so much to me over the years and has taught me a lot that I will continue to use throughout the rest of my life,” Tauaefa said.

Tauaefa is currently back in his hometown, Dallas, for his training for the NFL.

“Josiah certainly developed into one of the best players in UTSA history and that was because of his hard work and dedication to be the best he could be,” said UTSA Head Coach Frank Wilson.

Tauaefa wishes his former teammates nothing but success in future seasons. “I hope they continue building and molding our culture into a winning one and to get more and more people to buy into what the coaching staff and all of San Antonio is trying to accomplish,” Tauaefa said.