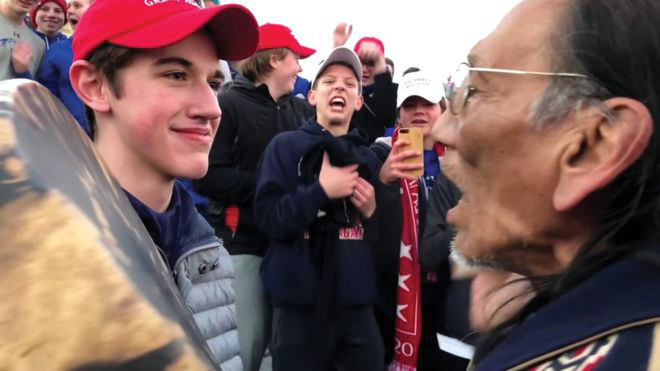 On Jan. 18, thousands of Native Americans gathered outside the Interior Department – Bureau of Indian Affairs to begin the first Indigenous Peoples March in Washington D.C. Apart from having their land stripped away and forcibly stolen, some of their grievances include the organization of Indian reservations or lack thereof, injustices towards the indigenous community and misrepresentation in the media and society.

As the March for Life took to the streets of Washington D.C., the Indigenous Peoples March, which happened to coincide, specifically received a tremendous amount of support after videos went viral of Make America Great Again (MAGA) teens disgustingly harassing and mocking a Native American Vietnam War veteran, Nathan Phillips.

The video that has circulated around social media platforms show a large group of white male teens swarming around Phillips while he continues to beat his drum. The male students in the video attend Covington Archdiocese Catholic School in Northern Kentucky and made the journey to voice their anti-abortion beliefs. Phillips, singing a song about unity and strength, was met at an impasse when one of the Covington students stepped in front of him and refused to let him continue marching, holding a grim smirk on his face and a red hat on his head.

“If I took another step, I’d be putting myself into his presence, his space, and I would’ve touched him. That would’ve been the thing that they would’ve needed to spring on me,” Phillips said.

The students all share one commonality: their red hats. As many of us know, racism is still alive and thriving in this country and since the election of Donald Trump there has been a spike in racially charged incidents. With the anti-immigrant rhetoric coming from the current administration and widespread fear mongering by white conservatives, this makes us wonder what direction our country is headed towards. The red hat represents not only a political platform, but also a set of immoral ideological practices that promotes hatred.

The MAGA teens that hassled Phillips began chanting “build the wall,” a common saying used by the president to promote his anti-immigrant and anti-Latinx agenda. “This is indigenous land. We’re not supposed to have walls here, we never did,” Phillips said.

This type of language has always been prevalent in American society and these white teens that were born into positions of power have most likely never felt or understood oppression. This incident raises many questions about our society; what does it say about the new modern conservative youth that Trump birthed, or rather, sheltered? What values are parents and educators teaching their students?

“I wish I could see that energy from those young men, and put that energy into making this country really great.” Phillips said. “We took care of our elders, of our children. We always provided and taught them right from wrong.”

Analyzing our country’s societal and political dynamics is definitely a slippery slope. Native Americans, a marginalized group that have lived in the shadows of our society, are finally being heard. Phillips’ story is sweeping the nation, and with many marches planned for MLK Day, it is invigorating to see the widespread support but also acknowledging the challenges that the community still faces.