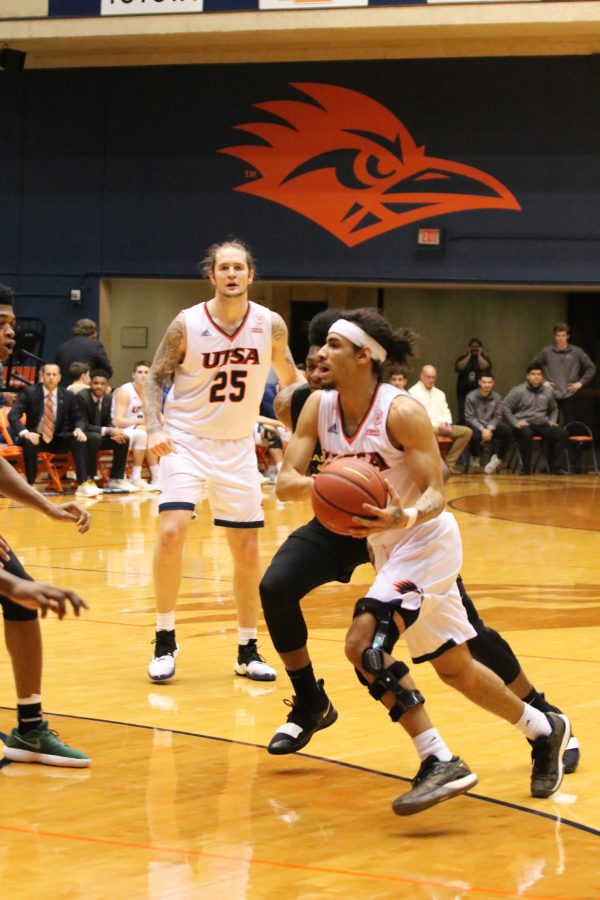 After one of the most memorable weeks in program history, head coach Steve Henson and the UTSA men’s basketball team find themselves tied for first place halfway through the conference schedule.

UTSA (12-9, 6-2) began their week by hosting the Charlotte 49ers after a disappointing loss at UAB. The game was “popped open” according to Henson, after  the ‘Runners put up a strong opening quarter of defense and sophomore Jhivvan Jackson caught fire.

The second-year guard from Puerto Rico took over the game for the Roadrunners by scoring 11 straight points with two layups and three back-to-back three-point baskets. This sparked a 26-4 run that allowed the Roadrunners to jump out to an early lead. Their defense suffocated Charlotte throughout the entire first half which made their poor shooting average even worse. The 49ers were missing wide open three-point shots that could have brought them back in the game, however, UTSA controlled the first half and entered halftime with a 44-19 lead. Jackson contributed the bulk of the Roadrunners’ points by pouring on 21 points and out- scoring Charlotte through one frame.

The second half opened with more of the same from UTSA, as they went on another run that stretched their lead to 30-points and proved to be insurmountable for the 49ers woeful offense. Sophomore guard Keaton Wallace continued what Jackson started in the first half by leading the team in scoring with eight, and guiding the Roadrunners over the finish line to secure an 88-43 victory.

In the shadows of Jackson and Wallace, Adokiye Iyaye had a career day by scoring 12 points and grabbing three offensive rebounds tying his career high in points.

“I found my groove a little bit,” Iyaye said. “My teammates are always on me, telling me I’m divine. I was not making shots early but they kept telling me to shoot and they bring a lot of encouragement.”

Jackson and Wallace have combined to be the third highest scoring backcourt duo in the nation as the Roadrunners reach the halfway point of their season. The sophomore duo combined for almost half of UTSA’s total points with 43. Jackson’s game-high 28 points left coach Henson with an easy job in the second half. “Yeah [Jackson’s big night] helped a lot,” said Henson.

UTSA’s quest for first would reach its climax as they hosted Old Dominion in the Convocation Center on Saturday, Jan. 26. The Roadrunners’ hope for first looked bleak as they entered the final four minutes of the game down 17 points.

UTSA’s all-world backcourt took over with Jackson and Wallace each hitting a pair of three-pointers on four straight possessions to bring them within three points. ODU crumbled under the pressure by turning the ball over with 24 seconds left, and a chance to ice the game at the free throw line. UTSA took advantage of the turnover and big shot Wallace hit a three-pointer that would give the Roadrunners a 74-73 advantage and eventual victory.

This 17-point comeback is the largest comeback in program history led by Wallace and Jackson who each scored 29 and 21 points respectively. Senior Nick Allen had his fingerprints on the comeback with a three-pointer that sparked the comeback, and a game-sealing block with six seconds left.

This historic win left the Roadrunners in a three-way tie for first place in the C-USA standings with UAB and North Texas all tied at 6-2 in conference play. UTSA travels to Western Kentucky University on Thursday, Jan. 31, for a chance at sole possession of first place.