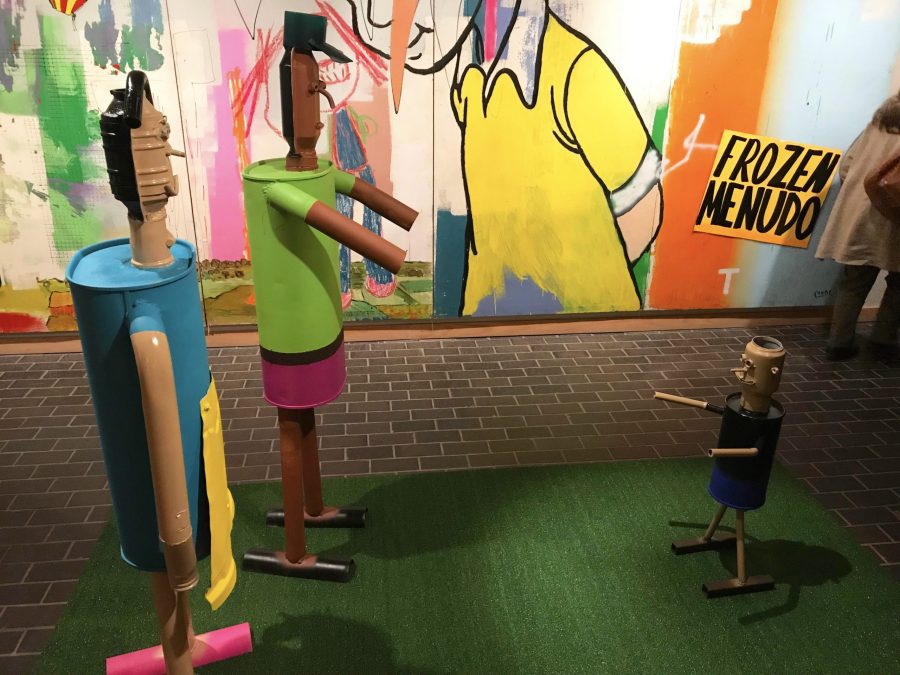 Brownsville native Cande Aguilar is revolutionizing the meaning of cultural imagery in the world of modern art. His work, displayed at the McNay Museum of Art, is part of his barrioPOP art collection that utilizes a set ideas and social norms that commonly exist in border towns and amongst Mexican-American communities.

“BarrioPOP is more of cultural imagery, and having to do with culture from the border area here in Texas. The point is for people to feel connected to who they are and what they were. The idea is to juxtapose things from the general culture, [American and] Mexican-American, and come up with this contemporary voice that might be made in the barrio,” Aguilar said.

The work showcases a variety of objects typically found in local Mexican – American neighborhoods, auto shops and mercados (markets). Aguilar constructs these objects and reintegrates them with vibrant colors that mirror a border town. An example of this is his piece that displays a family: a mother, a father and a boy made out of mufflers. The family is painted in a set of blue, yellow and green colors and are placed face-to-face with their hands extended, reaching out towards each other. His connection to mufflers goes back to his youth when he and his relatives fixed cars for his community.

Raised in Brownsville, Texas, Aguilar recalls his time starting off as a musician. The first time he was on a stage in front of people was when he was 12 years old. He held an accordion and his godfather asked him to play a song. He describes the event as a life changing experience. He relates conjunto music to his art since both share Mexican and American influences.

“I’ve always thought that conjunto music could be and was for me – a doorway into the arts,” Aguilar said.

On Jan. 31, Aguilar showcased his installation at the McNay Museum of Art. He described it being “inspired by graffiti, street art, popular culture and border politics.” Growing up in the Rio Grande Valley, Aguilar was aware of inequalities within American society and portrays some of his work as flimsy in order to capture that societal fragility.

“Capitalism is something that can melt away if we don’t play our cards right and vote in the right direction. It can be a danger for a certain population in the country. It’s a political piece. I would like people to see the work and come up with their own interpretation. It’s a learning experience,” Aguilar said.

Aguilar has captivated the world of art having displayed some of his pieces in museums all around the globe. For more information about his work and to dive deeper into his barrioPOP collection, visit his website at https://candeart.com/home.html.