Men’s basketball on the hunt for first 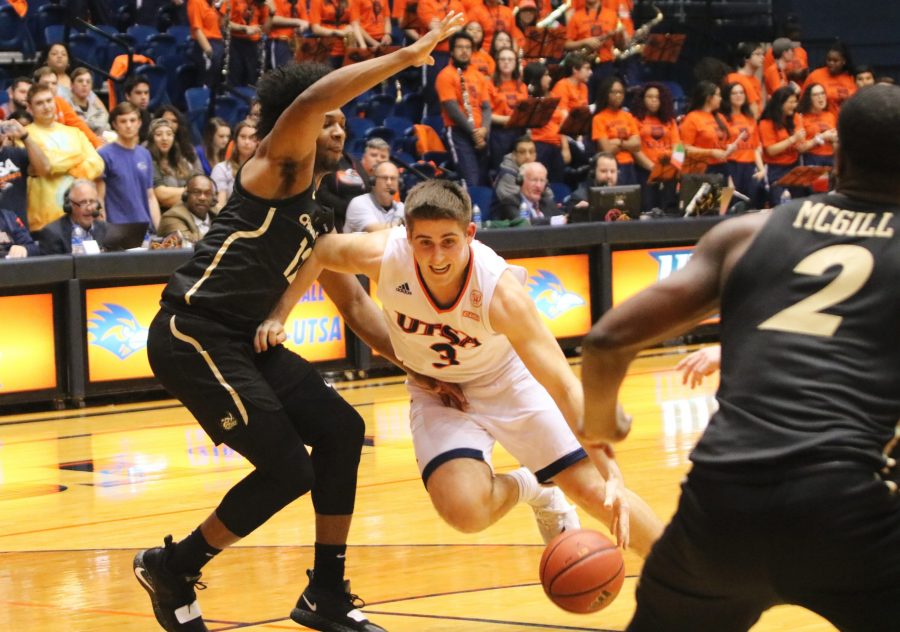 Byron Frohnen dribbles for a layup in the paint. Ellyson Ortega/The Paisano

The UTSA Men’s basketball team hit the road last week with games against Western Kentucky University (WKU) on Feb. 1 and Marshall University on Feb. 3. Both games were highly contested and needed an overtime period to reach a conclusion. Sophomore guards Jhivvan Jackson and Keaton Wallace each turned in red-hot performances, but the ‘Runners settled for a split record on the road trip.

The road trip began in Bowling Green, Kentucky against Western Kentucky. UTSA entered the game at 12-9, and Western Kentucky at 11-10. WKU led 41-39 after the first half, but after 6 lead changes and a strong second half push by the Roadrunners, the game was tied at 78 at the end of regulation. In overtime, the Roadrunners failed to maintain the second-half momentum and were outscored 18-10, resulting in an 96-88 victory for WKU. Jhivvan Jackson was the silver lining of this loss, putting up 46 points and three assists in 44 minutes. Keaton Wallace contributed 26 points in 42 minutes.

From there, the Roadrunners took on the Marshall Herd in Huntington, West Virginia. The 13-9 Herd put up a strong first half, leading 46-38 at halftime, but UTSA dominated the second half, leaving the score once again knotted up at 92 after regulation. However, this time the Roadrunners outscored Marshall 24-14 in overtime, making the final score 116-106. The ‘Runners once more were led by a stellar performance by a guard, but this time it was Wallace who put up 45 points, seven rebounds, and went 11-12 from the free throw line while Jhivvan Jackson notched 30 points and nine rebounds.

Both Jackson and Wallace earned C-USA co-conference players of the week for their performances this week. The ‘Runners return home to play Florida International University on Feb. 7 and Florida Atlantic University on Saturday, Feb. 9 at 7:00 p.m. and 3:00 p.m., respectively.