Something is rotten in the state of the union 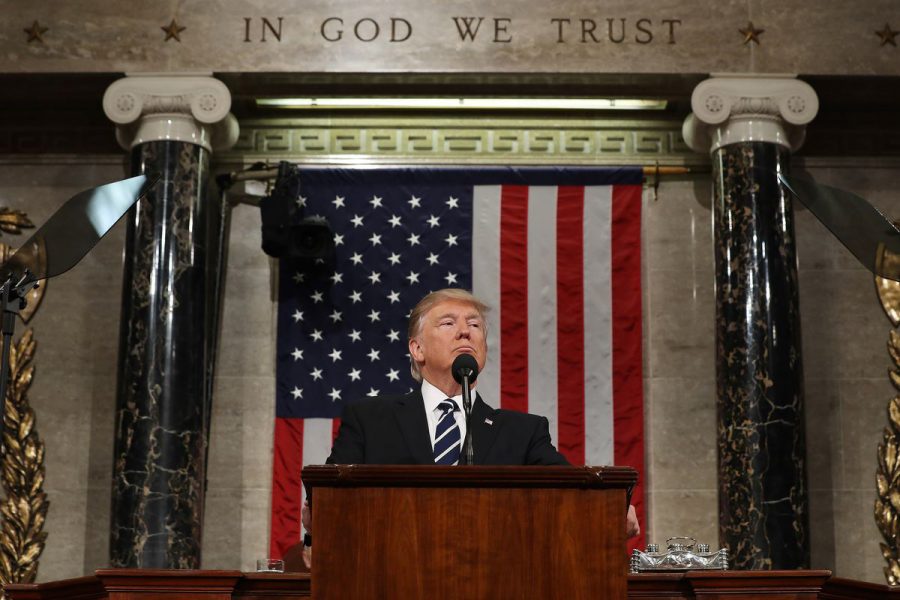 In his second State of the Union Address, President Donald Trump claimed his agenda was neither Republican nor Democratic; instead, it was “the agenda of the American people.” Trump’s unifying tone eventually turned sour with fear-mongering tactics of partisan hackery; the kind of banal rhetoric one could find at a typical MAGA rally.

Historically, the State of the Union address has been an opportunity for Presidents to lay out their plans to unify the country in times of great partisan strife. Rather than easing the political discord in our country with detailed strategy, Trump doubled-down on his conservative agenda, pandered to his base and failed to deliver a substantial plan of action.

Trump’s address was chock-full of sweet nothings dedicated to his supporters in light of the President’s approval ratings, which have been hovering around an (un)impressive 40 percent since January. Trump’s nostalgic references to America’s courage in WWII carried an undertone that called for the GOP’s continued blind faith in Trump’s agenda.

There was an unsettling moment when Trump said, “If there is going to be peace and legislation, there cannot be war and investigation.” Trump clearly (and poetically, I might add) referenced the myriad of cases brought forward by Robert Mueller’s special counsel investigations into Trump’s campaign, Russian influence in the 2016 election and various unscrupulous financial shenanigans, all having one common denominator–our President.

Trump’s threatening message paralleled another notorious President’s State of the Union address. “I believe the time has come to bring that investigation and the other investigations of this matter to an end,” said Richard Nixon six months before his resignation amid the Watergate scandal.

Trump told his audience, “Embrace the boundless potential for cooperation, compromise and the common good.” These calls for bipartisanship were quickly contradicted. For example, he called his fake crisis at the southern border a “tremendous onslaught;” in Nixon-esque fashion, he referred to Mueller’s investigations as “ridiculous partisan investigations.” He also made an ill-comparison of socialism between the catastrophes in Venezuela and the agenda of the Democratic party. Where’s the bipartisanship? He should have begun his address, “My fellow Republicans and co-conspirators, you’re all gonna love this.”

On a lighter note, Trump’s controversial behavior has brought some good to American politics. In his address, Trump congratulated the historic number of women in Congress who all dressed in the same white attire of the early-20th century suffragists. There was some really great irony in the ivory-colored crowd’s revelling; Trump’s notorious misogynistic reputation and anti-abortion agenda arguably played a role in the increase of successful female congressional campaigns and a new Democratic majority in Congress.

After Tuesday’s address, we now have a clear idea of Trump’s agenda for the American people. It is the fake crisis he calls the “lawless state of our southern border” that has two solutions: a $5.7 billion wall or another government shutdown. It is the ignorance of warnings from our own intelligence agencies about climate change, and its current threat to national security. It is rebuking justice and transparency in light of possible corruption. I could keep going, but then this article would soon consume the entire Paisano publication for this week.

Instead I will leave you with this: I implore you, reader, do not let this administration go unchecked. We have a responsibility to call out corruption when we see it. As the 2020 elections approach, we have an opportunity to decide the new face of American politics. This new opportunity will benefit us (to quote the president’s wisdom) “if only we have the courage to seize it.”