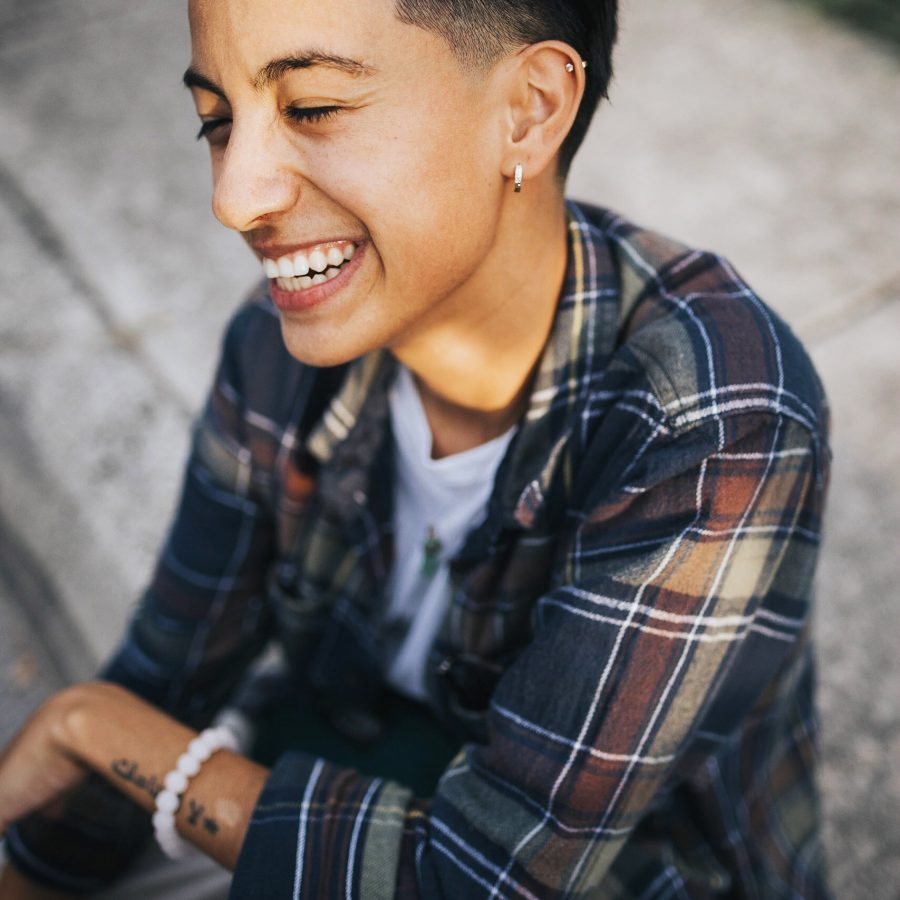 Beltran enjoys a moment on the other side of the lens. Photo courtesy of Liliana Cornejo-Valenzuela

Dominique Beltran, 23, is a native to Brownsville, Texas. After moving to San Antonio at the age of 10, the culture of the city inspired the work Beltran does by capturing everything from Latinx culture to edgy street fashion. Rise and Shine Photography, Beltran’s photography business, are means through which she connects with clients for everything from photoshoot bookings to freelance work. Beltran finds irony in the multiple eye surgeries that she had as a child which became a contribution to the ‘eye’ that allows her to incorporate a realistic spin on human life. Being immersed in art as a child made it only natural for her creativity to bloom into the art of capturing human essence through a camera lens. Storytelling best describes the work of this young photographer whose signature can be identified as ‘real-life.’

“I capture a mix, so it’s hard to just label my work with one specific category. I do a mix of portrait, freelance and storytelling photography. A collection of diaries are what I like to think of the stories I tell,” Beltran said.

Beltran’s latest accomplishments include her photos having been selected for The San Antonio 4×5 Photo Fest, Movement Gallery Exhibit, Street Fatale Exhibit of 2018 and 2019, as well as Photo de Septiembre in the Arts section of The Current. A major accomplishment of Beltran’s include hosting her own exhibit in January of 2019, titled “The City of God,” presenting a collection of street photography and signature pieces. Maintaining a balance between a professional and artistic work ethic is most important to Beltran, as she is inspired by her mother, Maria Dehonney and Frida Kahlo.

“It’s hard describing myself to people, or telling my own story so I try to utilize that by capturing the faces of other people to describe myself; my personal experiences through other people,” Beltran said.

The Mexican heritage engrained in San Antonio Culture is present in Beltran’s work.

“I feel like it’s hard to describe San Antonio, there’s a feeling that you miss when you leave. The roots of the culture run deep here, and capturing the Latinx community here and the way that we’ve been able to sustain ourselves motivates me,” Beltran said.

Beltran’s eye is drawn to those who work hard, and contribute to their community and cultivate inspiration for generations to come.

“The elderly lady making tortillas on the street corner for 50 years or the migrant workers who moved here, all contribute something that makes the community unique in its own; each person has their own story to tell,” Beltran said.

This past Saturday, Beltran was chosen for the third time in just a year to be a part of the 2019 Fatale Women’s Photography Exhibit, which features San Antonio’s up and coming female photographers. The event consisted of tunes and community, as observers appreciated the Fest’s theme “Movement.” Photos decorated the walls, capturing movement in various forms. As an advocate and member of the LGBTQ community, it was an honor for Beltran’s photo to be featured. The photograph captured the smile of an individual holding the Pride Flag as it blew in the wind; colorful and radiant.

“To be represented was a really big deal; the turnout was great and it was an amazing experience,” Beltran said.

A coffee enthusiast, lover of furry friends and taco truck frequent, Beltran’s goal of many is to do one thing through her work: inspire those to tell their own story.