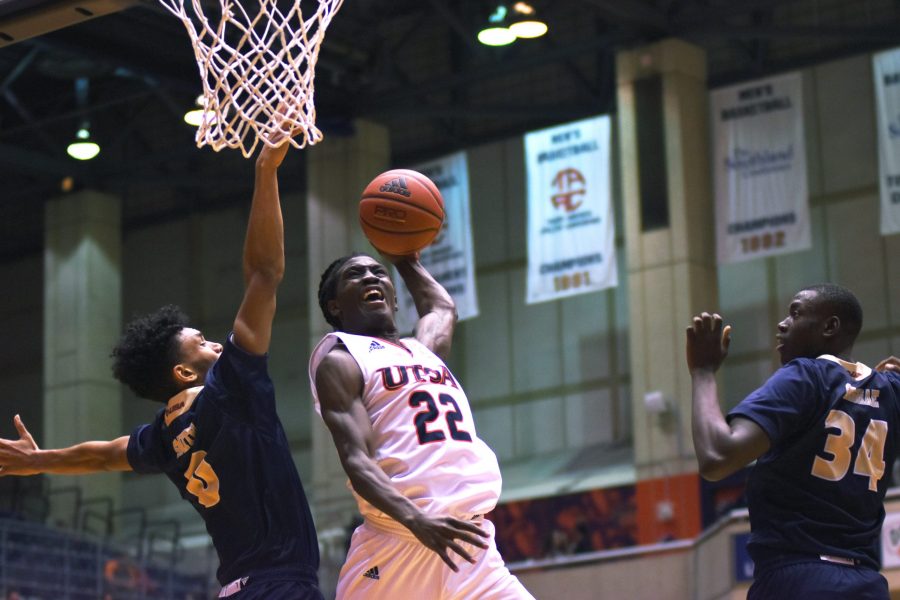 UTSA men’s basketball (15-10, 9-3) scored into triple digits, defeating Florida International University (FIU) (14-11, 5-7) 100-67 on Thursday, Feb. 7. Following tip-off, the ‘Runners gained control of the ball and the lead and did not let go until the buzzer finished the game.

Keaton Wallace pushed ahead with 27 points against the Panthers. This win was the ‘Runners’ ninth straight at home, which has not happened at UTSA in 27 years. Wallace shot  11 for 13 in the game and increased to his 20th 20-point game of the season. Nick Allen had his first double-double of the season, with 10 rebounds and 11 total points. Jhivvan Jackson madae his way into the ‘Runners history books by scoring 13 points, pushing him into the 1,000-point club – the 16th Roadrunner to do this.

The ‘Runners shot a field goal average of 58 percent, a three-point average of 38.5 percent and 83.3 percent on free throws.

At the start, Byron Frohnen contributed six of the first 10 points. Within the first five minutes, the ‘Runners were up 17-2. As the half progressed, the Roadrunners advanced to a 23-point lead until finishing out the half leading 50-30.

Jumping into the second half, the ‘Runners scored eight points with three-pointers by Wallace and Giovanni De Nicolao and a layup by Wallace. Later in the quarter, the Roadrunners racked up a 33-point lead. For the Panthers, Brian Beard and Devon Andrew scored 14 points, respectively.

On Feb. 9, the ‘Runners faced off against Florida Atlantic University (FAU) and won 86-74 for their 10th straight win at home. This improved the Roadrunners to 12 wins in the past 15 games.

As the ‘Runners hit 53-44, the Owls scored nine unanswered points before the Roadrunners laid down a 16-0 streak, five points from De Nicolao and a fast break by Jackson.

With 8:07 on the clock, free throw shots by FAU broke the point deficit, but could not close the scoring gap as the ‘Runners progressed to a 72-54 advantage. The Owls later responded by cutting the gap to 13 points with a 5-0 spurt. Jackson and Wallace combined for 30 points for the first half for a 46-39 lead at the half.

In the second half, the ‘Runners came out with a 14-7 lead in the first five minutes. Wallace shot in his record-breaking three-pointer with three more free throws following. The ‘Runners and FAU went back and forth with scoring, but the Roadrunners kept the lead for the games entirety.

UTSA men’s basketball will return on Thursday, Feb. 14 against Southern Miss University at 7 p.m. in Hattiesburg.