Athlete of the Week: Kylee Kato 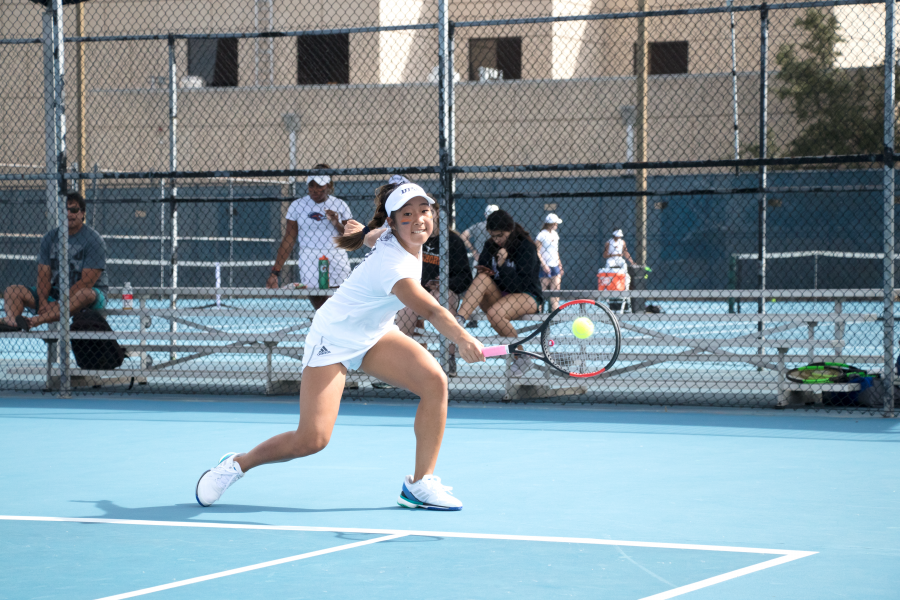 Kylee Kato prepares to swing the ball over the net. Renato Lopez/The Paisano

Junior Kylee Kato has been an essential player to the start of the women’s tennis 2018-19 season. Kato has led UTSA in singles with a mark of 4-2, and has taken over doubles alongside freshman partner Jasmin Starr with a 5-2 mark, ranking as team best.

Kato has moved over 3,500 miles from Maui, Hawaii, to pursue her passion for tennis. Nine-year-old Kato joined her elementary school best friend in tennis lessons and immediately fell in love with the sport. Kato also played soccer and competed in gymnastics, but after she discovered tennis, she dropped everything else.

Kato continued to play tennis throughout high school, and she competed on the United States Tennis Association (USTA) Hawaii Pacific Team. USTA would select the top-ranked players in the Hawaii Pacific section, creating a juniors team to compete in tournaments at the local, regional and national levels.

“Every match that I’m able to win is such an accomplishment,” Kato said. “For me to play at this kind of level, especially Division I, has always been my dream.”

Kato first stepped foot onto UTSA in November of her high school senior year for her first official visit. Former UTSA head tennis coach Erin Scott had been teammates with Kato’s high school coach at the University of Washington. Once coach Scott caught wind of Kato, she worked hard to recruit this soon to be stand out player for the ‘Runners.

Kato was excited to move away from Hawaii and begin a new life away from the place she was born and raised. After her first visit, Kato fell in love with San Antonio.

“I would always tell people I felt ‘stuck on the rock,’ and I knew I wanted to go to school where not many people were from Hawaii so I could feel like I had actually moved away from home,” Kato said. “Of course Hawaii will always be home, but I absolutely love San Antonio.”

As a three-year veteran on the team, Kato has been exposed to many cultures from various athletes at UTSA.

“It’s fun meeting a bunch of new people from all over the world,” Kato said. “It opens your eyes because you realized that you’re actually playing tennis with someone from Brazil, Australia or even Spain, and it’s crazy to the see the cultural differences we all have.”

With the start of a new 2018-19 season, a new reign of coaching was born. Head coach Ki Kroll was welcomed by a team eager to experience a new practice regime, travel plans and overall game expectations. Shortly after being hired, Kroll let his true blue and orange colors show winning over the hearts of the team.

“[Kroll] is always pushing us to do our best and you can tell he really wants what is best for is, not only in tennis, but in school and life as well,” Kato said.

Kato’s close-knit team has given her the support she needed to excel in tennis through constant team encouragement. Being a Hawaii native, Kato has been a culturally welcoming individual to the tennis team.