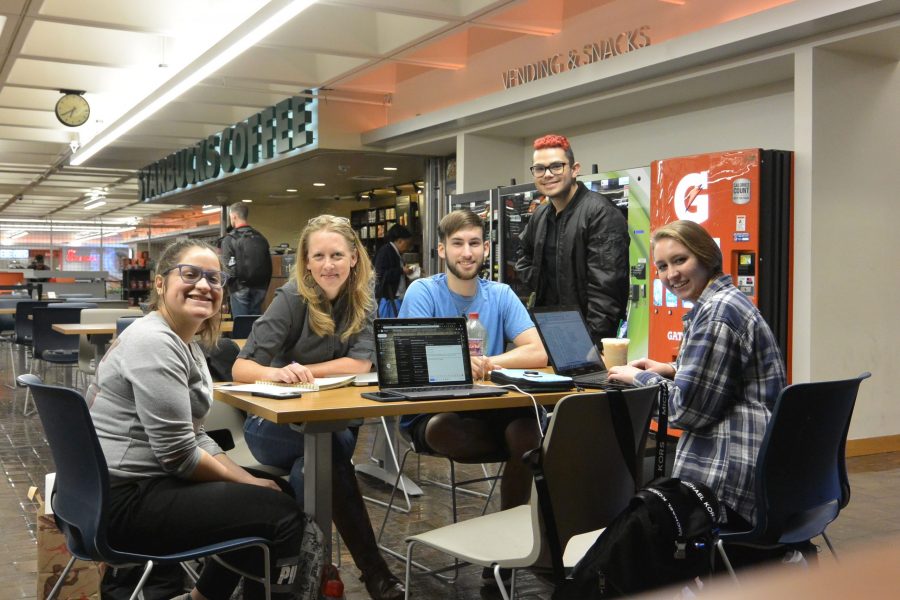 UTSA’s Music Theory Club (MTC) has conducted research over the listening habits of students in order to bring music out of the classroom and into the community. Along with embarking on a series of studies about music theory, the MTC also provides tutoring services and resources to the music majors. Formed as an original club in 2013-14, this new group was created in 2017 and has participated in two years of music theory conferences and research.

The MTC, spearheaded by Jennifer Beavers, assistant professor of music theory, and student Dito Saenz led the MTC students in answering the question, “What are college students listening to and how complex is it?”

“A reciprocal relationship is formed between the relevance and impact of our music theory students with community members that may not be music specialists but have a deep passion, engagement and curiosity for music,” Beavers said.

The three main goals of the club’s research was to develop a current listening list that is unique to college students on UTSA’s campus to help identify trends within the local community that can be brought into classrooms to diversify musical selections, to better understand the salient features of the music choices and to find correlations between why students choose certain songs and how the musical features map onto those reasons.

“[The MTC] kept returning to a similar, somewhat controversial question: Is music getting simpler?” Beavers said.

After the MTC established a research initiative, they began surveying the student body to determine the complexity of the music students were listening to.

“The survey functioned as our data set for songs, how students listened to it and it provided a series of questions related to musical background and reason for listening,” Beavers said.

Club members collected 50 student samples to be classified into a musical genre determined by the Apple Music database.

“We listened to 30 second clips determined by Google’s Random Number Generator on YouTube and assessed each sample based on four parameters: harmony and harmonic rhythm, rhythmic and metric changes, instrumental virtuosity and timbral and textual changes,” Beavers said.

The results showed that the everyday listening samples were current songs with relatively low complexity. The genres with the most interest were those including textual and timbral changes.

“The most popular genre students listen to is Rap [and] Hip Hip fusion,” Beavers said. “Within this genre, texture change accounted for the most active parameter, while rhythmic and metric change and harmony [and] harmonic rhythm were relatively similar to each other.”

Traditional music theory is undergoing transformations that aim to incorporate different types of music into the classroom.

“Topics surrounding texture and timbre are severely underrepresented in our standard course objectives and can perhaps bridge an important gap between more ‘serious’ art forms and those associated with ‘everyday’ listening choices,” Beavers said.

The MTC recently presented their research at the Texas Society of Music Theory annual meeting on Feb. 22-23, and they will be presenting again at a conference titled “Pedagogy into Practice” at the University of Santa Barbara from May 23-25.

“The actual results of the survey are of interest to musicians and non-musicians alike because whether we share a passion for analyzing music, we seem to share a common love and interest in the music we love,” Beavers said. “Finding ways to break down barriers between genres, problem-solve issues surrounding how to listen, evaluate and discuss while remaining sensitive to the varieties of music styles and complexities can directly influence the way we interact with the outside world.”