Out, loud, and speaking out 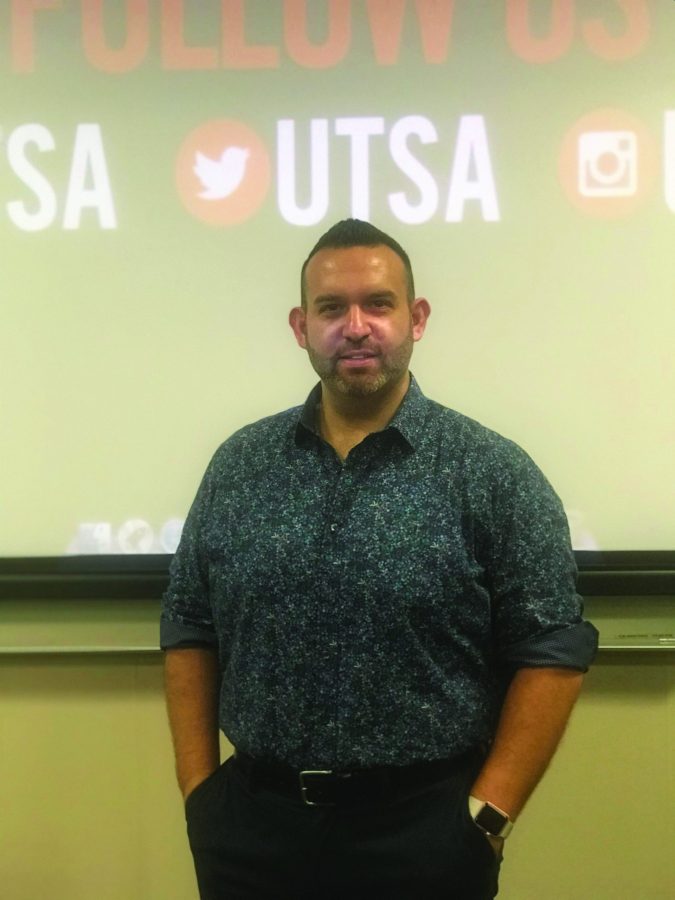 The UTSA organizations Active Minds, Spectrum and Psi Chi hosted a lecture with Adam Sauceda, a cisgender queer male psychologist who specializes in gender-affirmative care for all ages. On March 28, Sauceda lectured on the work he does with the LGBTQ+ community and those who are trying to integrate themselves into society with their true identity.

“The Parents and Friends of Lesbians and Gays (PFLAG) website has referrals for counselors, and I thought it was a great opportunity for UTSA students to learn more about transgender individuals and the LGBTQ+ community in general,” Mary Aldrete, junior psychology major, vice president of Active Minds and secretary of Psi Chi, said. “It is something that needs to be talked about, there is a lot of stigma around that we need to raise awareness about.”

Sauceda, a born and raised San Antonian, brought his practice to Central Texas in 2015 to help families and individuals within the LGBTQ+ community understand and immerse themselves into the Texan culture. He assists cisgender individuals with the acceptance process of the LGBTQ+ community with exercises such as speaking to families about the proper use of pronouns and writing letters to families and patients.

“Be visible,” Sauceda said. “I know it’s scary and not everybody has the resources, but attending support groups and even wearing a shirt that advocates your queerness shows that you are proud of what you are.”

The LGBTQ+ community has a higher risk of minority stress when rejected by their primary caregivers. This leads to the rise of suicides and depression rates within the community. According to Sauceda, the trans community has a 41 percent higher rate of attempting suicide than the 4.6 percent average of the public.

“There is additional minority stress involved because of the discrimination and oppression the LGBTQ+ community often times experience,” Sauceda said. “I think [LGBTQ+ people] are more prone to depression and anxiety.”

While sharing his statistics and work experience, Sauceda also told his story of coming out to his family and finding love within the community. His lecture was a call to action for everyone to raise awareness for the LGBTQ+ community.

“I hope that my story has connected with the audience, and showed that sharing your story is healing,” Sauceda said. “I hope that everyone is now familiar with the use of pronouns and more accepting of people who identify with a gender that they were not assigned with at birth.”