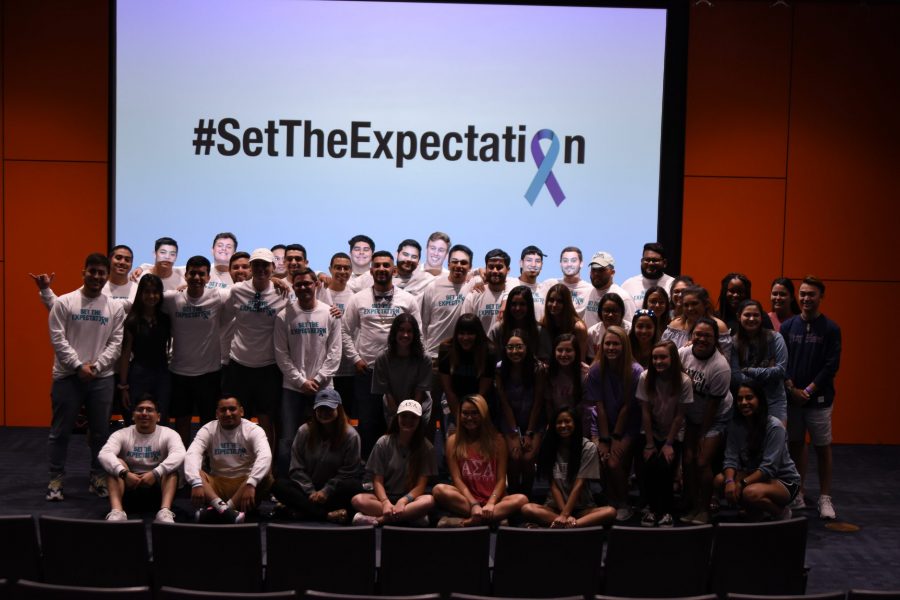 “The original pledge started in December 2016; I started speaking with [five major] football teams around the country,” Tracy said. “And I recognized really early on that coaches were drawing a line in the sand about players who rape and engage in sexual assault and no longer having the privilege of participating on the team. And then there were coaches that were actively recruiting violent athletes. So then there’s this huge disparity between coaching styles and I thought, ‘What can I do to get them all on the same page?’”

In March, Tracy spoke to all of the sports teams and Greek life on campus, sharing her story of being a gang rape survivor. Tracy painted a vivid picture for those who would listen to her story.

“Every Saturday, 10,000 fans would cheer for the men who raped me―My trauma lives right here,” Tracy said. “It doesn’t just go away. My rape happened 20 years ago, but it’s still right here.”

“The pledge is also an accountability tool for the community,” Tracy said. “[If] you know that a team has signed a pledge, you can use that to hold the team and coaches accountable and take a public stance should anything happen after signing it―signing my pledge is a public announcement, a national campaign.”

Brenda shared with The Paisano the motivation behind the next steps she’s taking to change policies within the National Collegiate Athletic Association (NCAA) and athlete’s eligibility associated with behavior.

“We have to attach eligibility to behavior; we are kicking athletes off of teams for smoking weed, not showing up to practice,” said Tracy. “There’s a number of reasons that we kick athletes off of teams, but we aren’t kicking them off for rape. It’s not an NCAA violation to commit rape and that’s wrong.”

Tracy ended the event with advice for survivors of sexual assault and abuse.

“The only thing that causes rape are rapists―that is one of my favorite sayings. A lot of people blame us and we internalize what is said. I want survivors to know that it is not their fault. There are many survivors out there and it was never our fault―we need to start holding the perpetrators accountable.”

There is an athletic community and now a Greek life pledge that #SetTheExpectation has made for those who actively want to contribute to combatting sexual violence in sports, college and society. For more information about how you can help, visit www.SetTheExpectation.org