The full range of materials 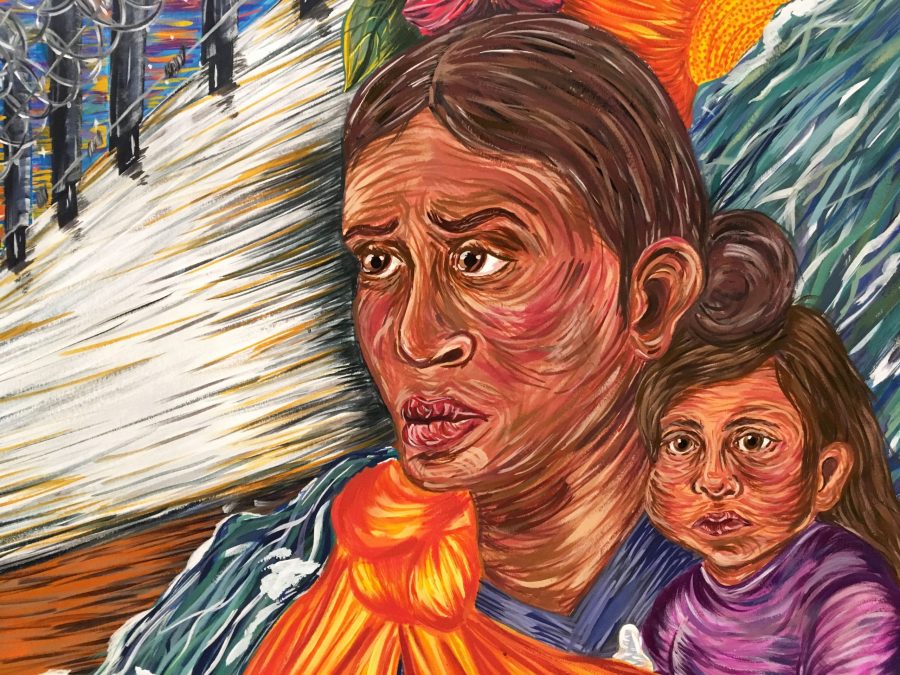 The 35th Annual Juried Student Exhibition at the UTSA Main Campus opened March 20 and concluded April 12. The exhibition featured 48 artists across various mediums—video, sculpture, painting and tapestry—and was judged by Bill Fitzgibbons. The pieces showcased many facets of emotion such as the loss of innocence, horror and commemoration.

“The selected works represent the full range of materials, methods and techniques, ranging from traditional processes to contemporary digital photography and video. Themes range from representations of the human figure to cultural commentary and exploration of conceptual concerns,” according to the UTSA Art Department website.

For the graduate category, Susi Lopera won first place for her bronze sculpture “Sanctuary.” Elizabeth Camilletti won second for her mixed media “Tell me what is real, lies count too.” Finally, Eric Ryberg won third place for his installation “4:1.”

Oldham’s “Conclusion” consists of an overlay of dominoes on a concrete slab depicting images of gradual progress. Every choice made in life is a stepping stone. This notion may be well-received by those who can pursue activities efficiently, however, it can be quite hellish for those who may lack proper motivation or resources. It shows the importance of gradual progress in life and how every choice makes an impact.

Salinas’ “Biographical” comments on how one creates the concept of self. The piece is a look at life through an ornate cupboard displaying old photographs, instruments and other items associated with deeply-held personal beliefs. Toward the bottom of the cupboard lies an intricately designed shirt, presumably worn during a significant period of the artist’s growth, adding to the personification of identity.

Salinas’ second piece on display, “The Witch,” depicts a woman falling down a ladder as bat-like creatures fly around her. While the falling woman is the titular witch, the imagery is more reminiscent of the image of Alice falling down the rabbit hole. It stirs memories of familiar childhood fantasy novels whisking readers away to another world—a world of wonder, enchantment and easy-to-digest morality.

Among the numerous works in the exhibit, Martinez’ “El Sueño Americano” felt the most politically topical. The painting depicts a migrant mother and daughter at a border constrained by the physical barriers of a wall and barbed wire. Even more so, the two are being impeded by a raging river. This is a very clear, poignant commentary on the border-wall debate that’s been occuring in Washington D.C. and across the U.S. The ongoing debate of “the Wall” is often marred by the lack of thought given to the humans affected by the potential incarceration and physical divide.

Samanos’ “Waiting” echoes both darkness and uncertainty. The painting depicts a young woman waiting alone under a lone street light. The piece stimulates both tension and fear in the hearts of anyone, namely those who live in isolated neighborhoods and suffer from unreliable transportation. Additionally, there is also underlying, unsettling tension involving the young woman out at night. The seemingly unspoken undertone of ongoing rape culture is tactfully expressed.

The 35th Annual Juried Student Exhibition displayed a broad range of mediums and art styles that showcased the students’ creative differences and approaches. While not every piece could be covered, they all evoked a spectrum of emotion and introspection that is uniquely experienced at a gallery. To learn more about the exhibition and upcoming events, visit arts.utsa.edu.