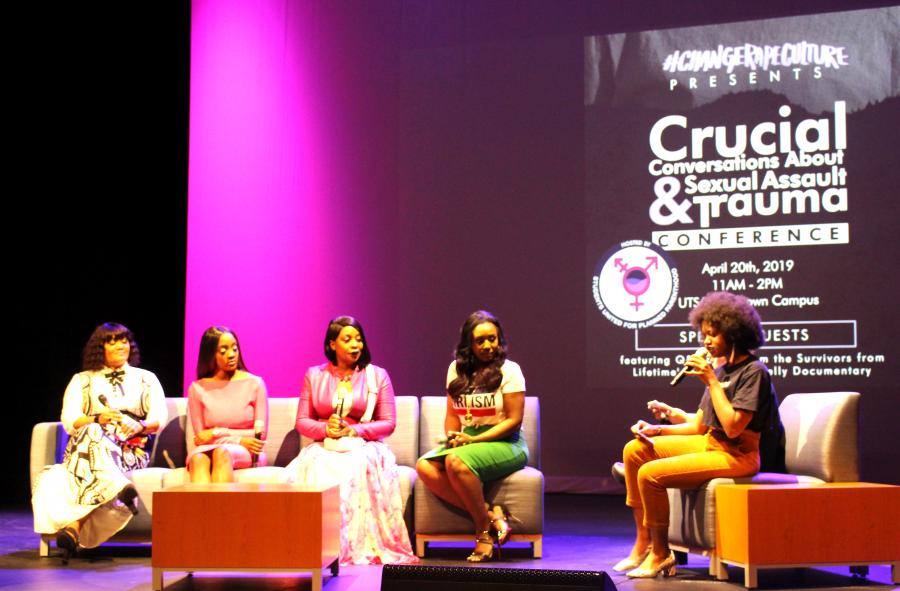 “I love you, and I will fight for you every single day of my life,” Kimiya Factory, junior political science major and co-founder of #ChangeRapeCulture, said when addressing sexual assault victims. “You are all my calling and nothing is going to stop that as long as I live.”

The conference featured organizations such as MOVE Texas and Planned Parenthood tabling before and after the conference. Other guests included Dr. Keely Petty, an aunt of Rogers and representative of the Bethal Prevention Coalition and Sound Mind Strategies, and K.C. Fox, a crisis strategist who worked with the women of the “Surviving R. Kelly” docuseries.

The documentary “Surviving R. Kelly” premiered on Lifetime from Jan. 3 to Jan. 5 in a six-part series discussing the controversial past of R. Kelly. Women from the documentary shared their stories of being the victims of sexual abuse, predatory behavior and pedophilic acts.

“Today will be a day of awareness, information, hope, resiliency and we thank you for taking time out of your schedule to be here with us,” Petty said, addressing audience members at the opening ceremony.

The conference opened with Factory and Katerina Tsvetkova, co-organizer of #ChangeRapeCulture and an administrative chair person of SUPP, in a video discussing the aspects of the #ChangeRapeCulture movement. Both defined rape culture and discussed the impact the movement has had on the UTSA community.

“I find rape culture to be very normalized,” Factory said in the video. “Changing rape culture creates that safe space for people to not have to be asked what they are wearing or to not to be asked how much they have had to drink. [And] simply just be asked about how they feel, [asked] about what they had courage to talk about what happened to them.”

“I was watching [the video from the opening session] and [Factory] was talking about how she was carrying other people’s demons―it’s very real,” Fox said in the “#ChangeRapeCulture Activism” presentation. “So, if you know an activist or if you are an activist, don’t forget that you need to be filled and refueled…activists are human beings too and they take on a lot, so don’t forget about them.”

The Q&A panel discussion began after the sessions concluded. Participants attending the event had the option to send in questions to ask survivors. The panel included Petty, Rogers, Kramer and Fox; Gardner did not participate due to the crucial topics that were going to be discussed. The panelists were open to talking about their experience with R. Kelly and gave advice to other sexual assault survivors.

When asked what motivates the panelists to keep fighting in their day-to-day lives, Rogers stated that she was her own motivation.

“Coming [out with my story], it made [me] have an inspiration for something,” said Rogers. “When I came out public[ly], I didn’t come out public[ly] because I wanted to, I did it for other people thinking [I was going to help others] but that didn’t happen. It turned into another catastrophe. I found myself, it’s me and you at the end of the day. Not the media, not family―it’s me and you.”

Throughout the session, many participants spoke out and told their own stories about sexual abuse and trauma. After every emotional story told, audience members and panelists clapped for bravely sharing their own accounts. The conference ended with a prayer from Dr. Petty’s husband, Sr. Pastor Lee Petty.

“If you want to be a part of the movement, stop the perpetuation of rape culture,” Factory said. “It all happens with you. And I know that sounds cliché, but goddamnit, we have to start somewhere.”