A welcoming atmosphere in the SU Paseo 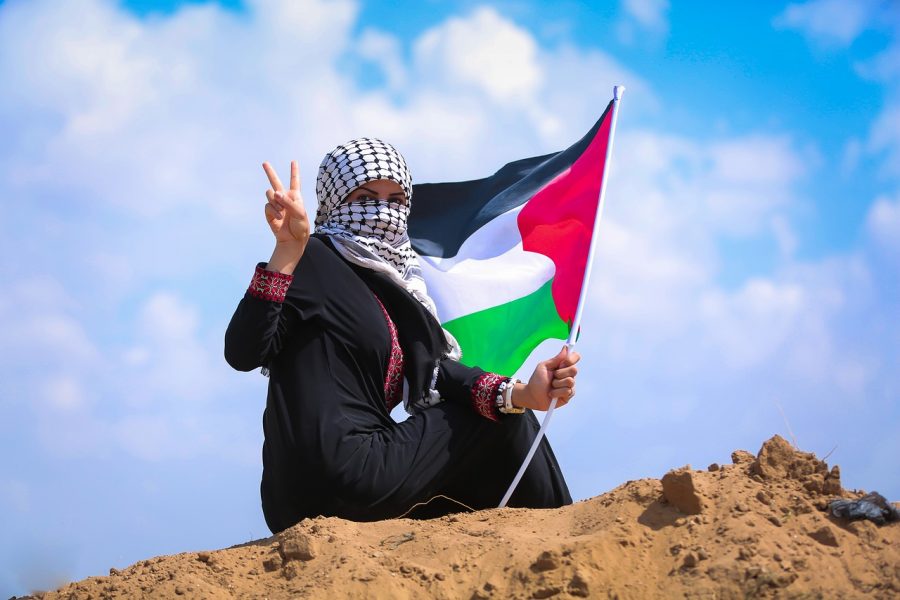 Welcoming is the first word that comes to mind when I think about the open mic night that Students for Justice in Palestine (SJP) hosted on April 18 in the Student Union Paseo. Attendees were greeted with kindness, and the sense of community that SJP had could not have been more apparent. Members talked among each other and made every effort to bring new faces into the conversations. The stage was adorned with multicolored keffiyehs, the name for a patterned cloth worn around the face that has become a symbol of Palestinian resistance and solidarity, and a Palestinian flag that blew in the wind, leaving green, black, red and white streaks in its path.

The open mic night was the final event in SJP’s Israeli Apartheid Week, a week that SJP co-founder Moureen Kaki, senior anthropology major, said was meant to “discuss the ways in which Israel practices apartheid.” SJP argues that in Israel, Palestinians are treated as second-class citizens and do not have equal rights. SJP wants to educate people on what is a very important issue to them and one that hits close to home for many SJP members. Kaki said that by advocating for justice for Palestinians, SJP is advocating for justice for all; justice is not justice unless everyone has it.

Even though the event was hosted by SJP, they were open to anyone coming on to the stage to perform music, poetry or spoken word. The event started off with some covers by Ponciano Seoane, a UTSA alumnus and SJP co-founder, who has also appeared on the NBC talent show, the Voice. Seoane’s talent was immediately recognizable, and it would not be the last time he took the stage that night. Seaone was followed by UTSA student Maram Al-Hakeem who read an impassioned poem about her Syrian identity and the ways that people, even from her home country of Syria, have attacked it. Especially powerful were the lines “thinking that you’re somehow qualified to cut the strings of my bloodline,” and “I remember the day I took back what was mine.” On stage, Al-Hakeem’s voice and Syrian pride rang out and the crowd resonated with her passion. Al-Hakeem explained that even the seemingly simple decision of picking a popsocket with the Syrian flag on it was filled with tension because of the two flags of Syria and what each is connotated with.

As the night went on, the crowd gathering around became larger and students seemed eager to listen to the stories and voices of one another on the stage. The welcoming atmosphere that was initially present held throughout the entire event as SJP hosts invited onlookers to come up to the stage and even let some borrow guitars to perform. One UTSA student, Forrest Wilkinson, performed two songs with the support of the crowd and walked down from the stage to a round of applause. Even younger kids were given an opportunity to speak, as the 13-year old brother of Al-Hakeem delivered his own poetry about being bullied in school and finding ways to secure his freedom from the kids who picked on him.

As the sign-up sheet dwindled, Palestinian music thrust through the speakers and SJP members performed what is called dabke, a dance that comes from the Levantine region, an area that encompasses Syria, Jordan, Israel, Lebanon and Iraq. The SJP members encouraged others to join in and taught them the steps of the traditional dance.

At the end of the event, Kaki once again thanked everyone for coming to take part in the open mic night and congratulated her fellow SJP members on successfully ending their first Israeli Apartheid Week. Kaki will graduate at the end of the semester, but she hopes that SJP continues to push forward its message of justice for all people, a message that anyone would be proud to have as their legacy.