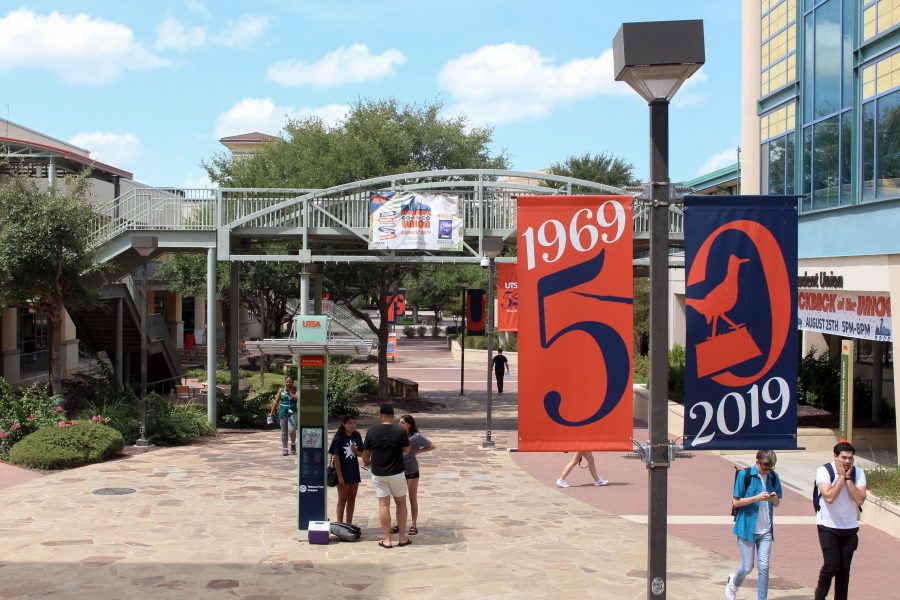 Students walking through the Paseo.

The College of Business (COB) is the centerpiece for phase one of UTSA President Taylor Eighmy’s 10-year plan to expand the Downtown Campus. This project was the first legislative priority but UTSA did not receive the $126 million in tuition revenue bonds it proposed to the Texas legislature to fund its construction.

The university still received the following: a $26.1 million increase in formula funding over the next two years, $80 million in statewide funding for Texas Grants to assist students needing financial aid, funding for a new Foster Care Pilot Program, $10.4 million to support UTSA faculty development through the Core Research Support Fund and other funding measures.

The lack of funding for the COB has the potential to disrupt the timeline for the college’s relocation to the Downtown Campus. Additional expansion plans that includes the School of Data Science, residential buildings and the National Security Collaboration Center.

Since UTSA lacks legislative funding to move the COB, Eighmy plans to seek other funding sources.

“[UTSA is] looking at Public-Private Partnerships (P3s)… [and we are] exploring possible additional support from the UT System, and additional philanthropic support via corporate and private gifts,” Eighmy said.

According to Eighmy, costs for downtown expansion will not be passed down to UTSA students.

“Tuition and fees will not be used to finance the expansion,” Eighmy said.

The president also confronted the renewed uncertainty about the COB moving downtown as originally scheduled.

“The College of Business is working to determine the best academic programmatic components to fulfill the goals of UTSA’s initiative to Expand Business Education to the Downtown Campus,” Eighmy said. “This work will evolve as plans for the college’s expansion progress this fall. We are also accelerating our efforts to increase university academic offerings online. For example, starting this fall, students can meet UTSA’s core curriculum requirements entirely through online offerings, supporting the goal of full-time study at our Downtown Campus.”

Another primary reason for expanding the COB downtown was to ease the “critical space deficit” that currently exists in the COB on the main campus. The deficit is expected to more than double to over 558,000 square feet by 2028, but the president hopes to address this with the Campus Master Plan that will be released to the public this fall. The Campus Master Plan will seek to address the infrastructure strategy for all four UTSA campuses.

UTSA is currently undergoing an analysis to determine how to more effectively use space on campus to ease the space deficit that grows along with rapidly increasing enrollment numbers.