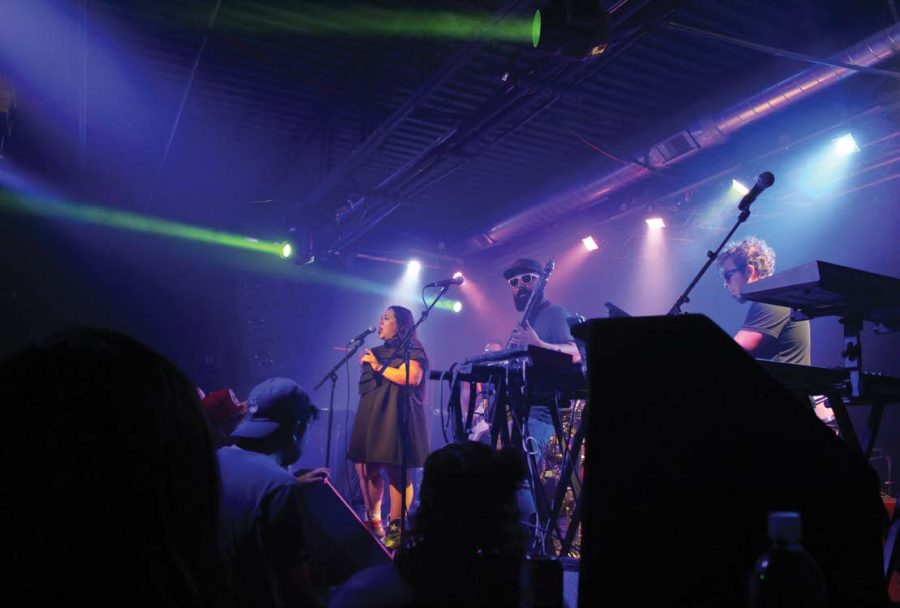 ¡Eso Es! hit all the nostalgia points for any Latinx person who grew up in South Texas. Upon walking up to Paper Tiger, guests were greeted by food vendors selling Hot Cheeto-topped elote and sour pickles with chamoy among many other Latinx street food favorites. Inside the venue, the nostalgia continued. The Paper Tiger was decorated with a 90s glamour-shot style airbrush photo booth as well as an airbrush artist customizing ¡Eso Es! merch.

Luna Luna, a collective from Dallas that describes themselves as a “modern indie band,” started off the night, and their tunes filled the air with dreamy synth-pop perfect for any summer night. Following Luna Luna was a Selena Quintanilla tribute band, Bidi Bidi Banda. The crowd danced and sang along to all of Selena’s greatest hits as Bidi Bidi Banda hit all the late Latinx icon’s signature grooves from her Donna Summer disco medley, which was performed at her last concert at the Astrodome in 1995, to her greatest hits such as “Como La Flor” and “Bidi Bidi Bom Bom.” The night took a turn for a more hype vibe as Miami queen, La Goony Chonga graced the stage rapping in Spanish to heavy 808 beats that felt native to the south.

¡Eso Es! made sure that the dancing would not end with La Goony Chonga as the synth-pop queen, Empress Of, made sure the crowd danced to her songs. She pranced across the stage in a neon orange two-piece set, and she engaged with the audience and made sure the crowd swayed along to her hits such as, “I Don’t Even Smoke Weed.” The main act of the evening was “chillwave” group Neon Indian, whose singer, Adam Palomo, is a San Antonio native. They played hits from their 2011 critically acclaimed album, “Era Extraña,” which had the crowd in constant swaying motion throughout their whole set.

“It’s a great experience to be around all these Latinx artists that aren’t just one genre of music. This tour shows that you can’t put us in a box – we can do everything,” La Goony Chonga proclaimed. Latinx artists come in all spectrums and ethnicities, and ¡Eso Es! captured it all perfectly.