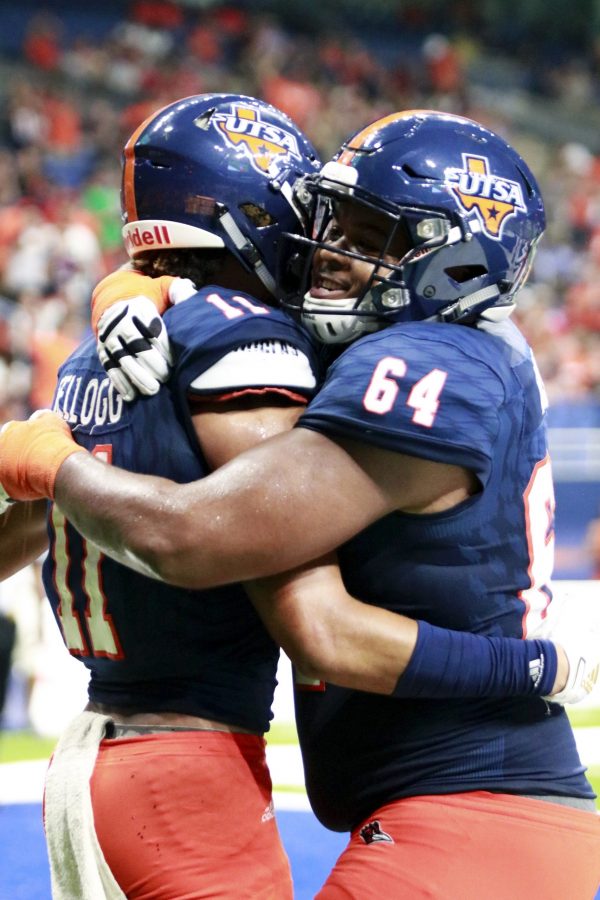 UTSA started the 2019-2020 season in ‘rowdy’ fashion, defeating the University of the Incarnate Word Cardinals by a score of 35-7 on Saturday night. The blowout win filled the hearts of Roadrunners with optimism and excitement for the upcoming football season. UTSA hosted UIW for the ‘Runners’ first home game of the season at the Alamodome. This was the first matchup between the two San Antonio universities, and an attendance of 26,787 came to spectate this ‘Hometown Showdown.’

The football team, led by Head Coach Frank Wilson, matched the energy of the crowd leading a fierce and fast-paced game plan and finding success in various facets.

Harris showcased superior athletic mobility and speed in his first game for the Roadrunners, cutting through the Cardinals’ defense with scrambles, QB options and excellent decision making. Harris also did a near-perfect job passing the ball, throwing for three touchdowns, completing his first 13 passes and completing passes to 11 different receivers. The ‘Runners were 4-4 in red-zone conversions and dominated possession time with 40:02.

UIW won the opening coin toss and elected to defer, giving UTSA the first possession. The Cardinals’ special team unit botched the opening kick, providing UTSA with good field position to begin the game. Despite that, the ‘Runners first possession ended as quickly as it began, with a quick ‘three and out’ and a punt to hand UIW offensive possession.

UIW started their first drive with a pair of successful passes from Cardinal quarterback Jon Copeland, but UTSA’s defense quickly reacted. Adjustments were made and UIW was brought to a fourth down.

In surprising fashion, UIW attempted a fake punt, hoping to catch the ‘Runners off guard and maintain possession. UTSA’s special team unit covered the fake punt perfectly and tackled the punter deep in the backfield. After the game, UIW’s Head Coach Eric Morris admitted that the fake punt was not meant to be called and was a result of miscommunication among the coaching staff.

UTSA started their second offensive possession on UIW’s 40-yard line. UTSA’s Harris had three completions in a row to get the Runners into the red-zone. UTSA ended the drive with a 16-yard touchdown pass from Harris to TE Carlos Strickland II. Two unsportsmanlike conduct penalties were called on UTSA after the touchdown for excessive celebration.

The Cardinals quickly followed with a ‘three and out’, handing the ball back to the Roadrunners. UTSA went on to carry out a 14 play, 7:10 minute drive that featured an explosive 19-yard rush from Harris and finished with tailback Brady barreling into the endzone on a 10-yard rush, bringing the score to 14-0.

UIW secured a short possession of only 2:15 minutes, but this time ended it with a score of their own. Copeland led the Cardinal offense down the field with a 45-yard pass to wide receiver Jaelin Campbell, setting them up with field position inside the red-zone. The drive ended with an 11-yard pass to Ameer King for a touchdown, bringing UIW closer with a score of 14-7.

UIW’s special team unit once again botched the kick off, this time sending the ball out of bounds and giving UTSA position near mid-field. Harris led the drive with a collection of rushes and passes to put them into position in the red-zone. Tailback Deven Boston finished the drive on a 6-yard rush, giving UTSA a 21-7 lead.

The Cardinals returned with a ‘three and out’ in less than 2 minutes of possession time. The ‘Runners responded with a lengthy drive towards UIW’s 22-yard line. The drive ended with a rare mistake by Harris, throwing an interception caught by UIW’s Ashton Preston. The half ended with the Cardinals running out the clock.

The second half began with UIW in possession. In Cardinal fashion, they repeated a short possession of only 2:03 minutes and returned the ball to the ‘Runners. UIW’s drive ended on a failed conversion attempt on 4th and 9 at mid-field.

Scoring became routine for the ‘Runners. McCormick broke for a 47-yard rush during the drive, putting the offense in position to stride into the endzone on a 5-yard pass from Harris to TE Gavin Sharp.

The Cardinals and the Roadrunners traded possessions multiple times to end the 3rd quarter. UTSA scored once again in the beginning of the fourth quarter on an impressive 91-yard drive, led by the acrobatic play of Harris. Wide receiver Tykee Ogle-Kellogg scored the last points of the game with a 36-yard catch to give the Runners a 35-7 lead. The game finished with the appearance of UTSA’s second unit, a blow-out win in hand.

With a decisive win at home to start the football season, the Roadrunners are left with a new-found sense of pride. Coach Wilson has orchestrated a polished, determined, explosive football team, and with the leadership of Harris, UTSA can hope to see continued success throughout the season. The Roadrunners will face Baylor for their first away game of the season next Saturday, Sept. 7.