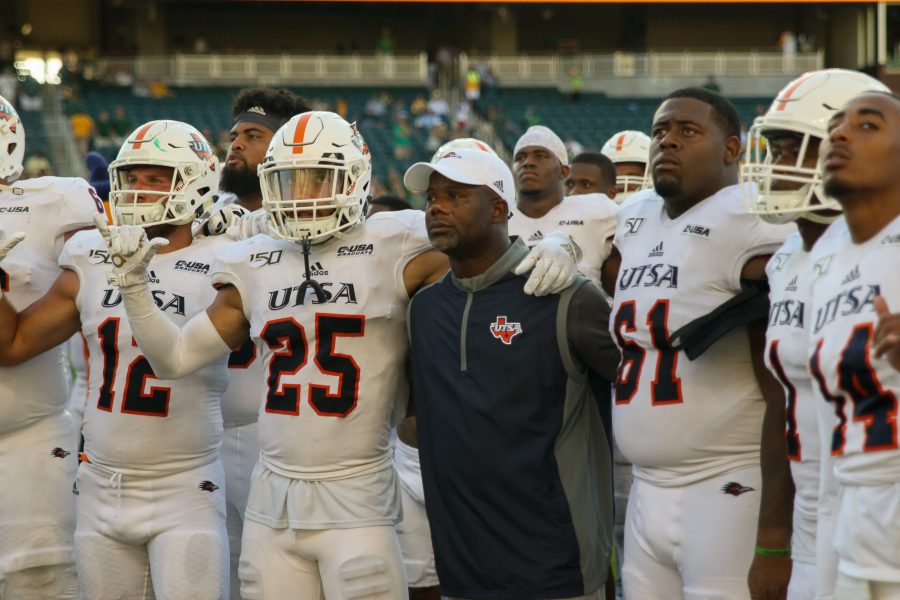 The trip to Waco Saturday, Sept. 7, brought a substantial loss to the UTSA Roadrunner football team (1-1) in their game against the Baylor Bears. This weekend marked the third meeting of the two teams, and until this game, both teams had only one victory over the other. Baylor now leads 2-1 in their record against UTSA, and the ‘Runners returned home with a devastating loss.

When asked about the game and his team’s performance, head coach Frank Wilson said, “The reality was we didn’t do anything very well in any aspect of the game: offense, defense or special teams. I thought our opponent got the better of us in all three, and [I] attribute that to a quality, [very] talented, well-coached football team in Baylor.”

The game was a slow burn; every five to 10 minutes of game time brought another Baylor touchdown and a fairly visible drop in the ‘Runners’ moral. Last week, Aug. 31, UTSA had a fantastic start of the season, but this game seemed to be a 180 degree turn from the prospect that the last game inspired.

“I thought we fought. I really do think our guys gave effort until the very end. I don’t think we executed well. I think the execution was not there,” Wilson said about the team’s performance. Wilson explained that he thought the team struggles most in executing tackles: “We have to be able to do these things under pressure.”

Wilson and the players hope to take this game as a learning experience. They want to identify what went wrong and work on it before they take on Army this coming weekend, Sept. 14.

“No one likes this feeling,” UTSA quarterback Frank Harris said. “We hate it, I hate it, Coach hates it. We don’t want to have this feeling again, so we know we have to get out there next week and execute and prepare ourselves so it won’t happen again.”

As UTSA prepares to move on in their season, they hope this game and the feeling after it will help inspire and motivate them in their coming challenges. Coach Wilson and the players seem hopeful about their upcoming competition and all hope to improve from this difficult game.

“[This] was that game. We put it in its place, and we realize that we had a monumental task in this Baylor team,” Wilson commented about moving on from this loss. “We don’t have time to contemplate all [these] things. We have to get ready for the next one.”

UTSA will take on Army at the Alamodome this Saturday and are hoping to use what they learned about themselves this week to earn a Roadrunner victory.