UTSA Football NOT in jeopardy 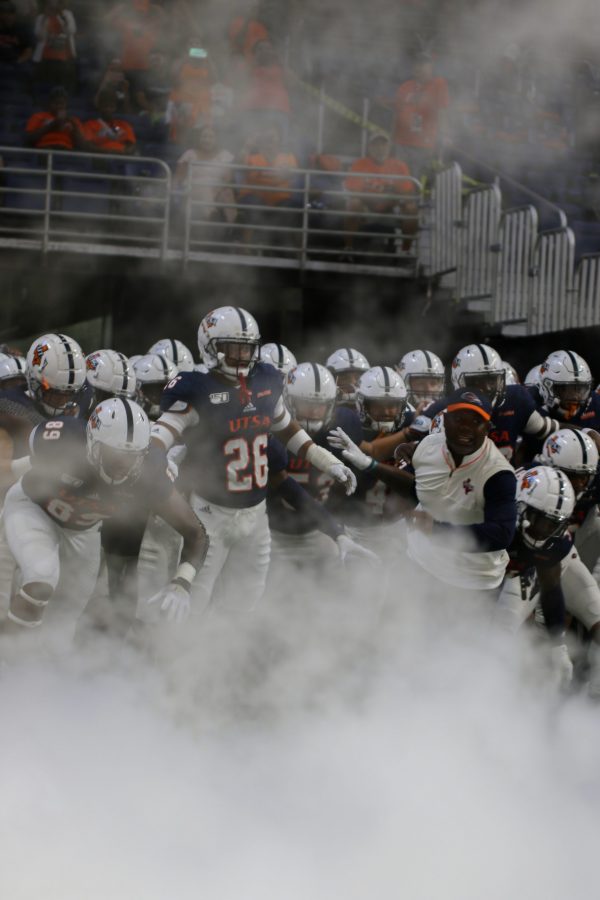 The Roadrunners in the tunnel shortly before running out against Army.Photo by Lindsey Thomas

After reflecting upon last Saturday’s 31-13 loss to a stacked Army roster, I realized I could fill out this op-ed in one sentence: UTSA football has entered the rebuilding process and is a few parts away from being a competitive program. That is the consensus I have made, and I’m sure many avid fans have drawn the same conclusion.

Our young core of skill players allowed us to breeze by UIW with ease. Starting QB Frank Harris will establish himself as UTSA’s dual-threat QB of the future. Despite mismatches in the trenches and moments where plays should have been broken, Frank has the vision and patience to wait for plays to develop and the IQ to know when to scramble out of the pocket.

Head Coach Frank Wilson has faced the consequences of remaining hesitant by rotating a handful of quarterbacks last season in hopes of finding the right guy for the job. This year, Wilson knew he had to buckle down and find his guy, and Harris turned out to be that guy. Having a consistent commander on the offensive side of the ball for multiple seasons will give us the leadership capabilities we lacked in the past, and this one aspect of the team is keeping me optimistic. Our young roster, in its entirety, has proven themselves capable of competing just three weeks into the season.

UTSA football isn’t in jeopardy. We have weapons on both sides of the ball. Freshman tailback Sincere McCormick, arguably the most talented skill player on the team, has already put up 204 rushing yards in his first three career starts, including two touchdowns against a solid Baylor team. This is something fans should be rallying with each other about. After last season’s shortcomings, we finally have our dynamic offensive duo in Harris and McCormick.Efficient guys like Tariq Woolen and Carlos Strickland II ensure Harris has weapons when McCormick isn’t on the field.

The versatility of this young team gives me hope for the future. Realistically, we might not have insane numbers this year. We might not be bowl eligible. We might get obliterated by Texas A&M, but I believe if we trust the process and growth of this team, in due time, they will achieve all of those accolades and more.

Many discouraged UTSA football fans have this expectation that we should be in a shootout with Army or Baylor, but when we aren’t putting up big numbers on established programs, suddenly our program is in jeopardy. That mentality in itself discredits a young program and coaching staff for not beating historic programs and displays ignorance about the game of football.

Practically, I can see UTSA moving on from Wilson and investing in a head coach that can ensure we can be more suited to compete. But for now, UTSA football needs to put emphasis on recruiting. UTSA’s label as a commuter campus has allowed us to focus more on recruiting from the San Antonio area, but the staff should emphasize snagging SEC-level players and selling our program to the best offensive line prospects in the nation. Many players don’t want to come here because they feel like we aren’t a competitive school that can produce substantive NFL talent but with LSU and Texas coming on our schedule sooner rather than later, it would be beneficial to get Harris elite protection and fill the holes in our defense. We are just a few pieces away from being something great. Recruiting and staff adjustments can get the job done, so in no way is this program in jeopardy. Put your phone down and stop sending tweets calling for the program to be shut down. Stop pretending we can compete in the Big XII or SEC. Be practical and understand that this is a young team. Trust this young core to learn their roles within this program.