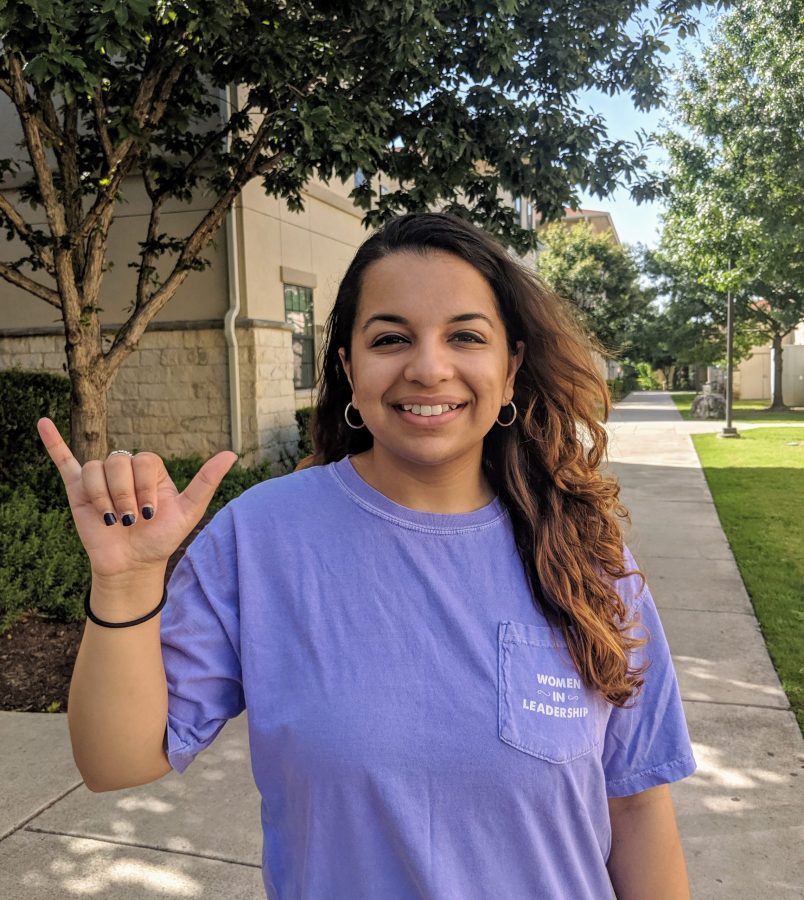 This is Vedika Khanna. She is a senior and a communication major. It took her three major changes to get her to where she is now, but the process has helped to build her confidence, solidify her values, and continue to push for success. This is her story.

“I’m from Houston, Texas, born and raised, and I come from a conservative Indian family. It’s great to have a lot of people around you that care about you, but that also means that you have a lot of opinions around you as well. One of the reasons why I came to UTSA is because I was offered the most money. I come from a middle-class family, so they don’t have the type of money to pay for my college. I also wanted to get away from Houston to really find myself. I have an older sister, she’s four years older than me, and I’ve always lived in her shadow. I didn’t really know who I was, and everyone knew me only as the little sister. The other reason why I wanted to come here was to figure out who I was without being connected to my family, but, at the same time, still being connected to my family.

When I got to UTSA, I was a mechanical engineering major: mainly because of my parents. That was the wrong decision from the very beginning, but I didn’t see that until a very close friend of mine gave me some advice. He said, “If you don’t enjoy it, then why are you doing it? It doesn’t make any sense.” I never thought of any other option than to follow what my parents said. When I finally decided to listen to myself and pursue what I wanted, I had to figure out what I was good at. At the time, I thought, “I’m good at programming. I have been programming since high school,” so I tried that. When I started programming and switched my major to computer science, I realized that engineering was not good for me. So, I decided to stick with computer science. Surprisingly, when I switched over to computer science, I had a lot of free time that I didn’t have before. Actually, I had free time before, but I didn’t utilize it.

My sophomore year came around, and I realized that I needed to get out there and do more. I decided to go to the involvement fair, and Women in Leadership seemed like something I would be really interested in. It’s a feminist organization that is all about empowering everyone, not just women, and teaching different leadership and confrontational skills. I was really inspired by the organization, and being surrounded by a group of people that think the way that I do was a big deal for me: I never had that. Growing up, my family didn’t have the open-minded thinking that I had. While at the involvement fair, I also thought about how I missed singing.

Choir was a really big deal for my entire middle school and high school careers. I didn’t have time for it when I was in engineering, but, since I switched to computer science, I was going to make time for it and I did. I ended up becoming a part of the UTSA women’s choir, and I had such an amazing experience. It was really surprising how much music can impact you in a positive way. I realized that whenever you have time away from all the technical thinking, all of the equations, and everything else that goes on at school, you really have the time to process what’s going on, and, at the same time, do something that you love. I was doing something that I love, which was singing, while processing everything that I learned about during the day without even realizing it.

Computer science was great, but I didn’t think I was at my full potential. I looked past my doubts and decided not to pay attention to those feelings. I’m going to keep going, and maybe those feelings will go away. This past semester came around and I had officer positions in Women in Leadership and Women’s Choir. I was the PR digital marketing person for Women in Leadership, and then I’m the President of Women’s Choir. Obviously, an officer position comes with a lot of responsibility, so a lot of things are piled up, and, on top of that, I am a computer science major. It was a lot, but I handled it well. I was actually very surprised with myself, but I still didn’t think that I was at my fullest potential staying a computer science major.

I realized that I was not happy, and I would ask myself, “What are you doing this for?” In the end, this is your college career and you need to figure out what you need to do. Yes, your parents love you, and they are going to be there for you, but you need to figure out what you want and not just what’s okay with them; and I did. I had a great opportunity for a communications internship with the Mayor of Houston. I didn’t even think I was going to get it. I did the internship, and I loved it. I met so many different people in the city government that I had no idea even existed. That internship was the turning point for me. It made me realize that computer science probably wasn’t right for me: I was still in computer science at the time. I had the opportunity to go to another summit, and they needed an on-site PR person. I had the experience from the internship I did in Houston, so I took the opportunity. I did the summit, and I rocked at it. I felt like a bad-ass rocking both my internship and the PR position. If I was doing such a great job in these positions, then why wasn’t I pursuing them as a career? In computer science, I was doing okay, but I wasn’t doing great. I took “okay” as that’s as much as you’re going to get. It was wrong of me to think like that. If you feel like you’re only doing “okay”, and you put in the effort to better yourself, but you don’t get any better, then maybe that’s just not for you. It was a big deal for me to realize that I wasn’t getting any better. I don’t want to be stationary. I want to keep going. I want to keep learning, and I want to keep growing as a person.

So, I finally chose to major in communications. I’ve had a lot of judgment for it, because I’m changing my major for the third time, but it seems right. My journey has just started, to be completely honest with you, but I’ve gone through enough to make me realize that everybody’s going to die, and you’re going to be stuck with yourself. You have to be okay with yourself, and you have to be happy with yourself in order to even survive before you start thinking about everybody else. I grew up thinking about everybody else. That’s not bad, but if you put people, even the people that you love, before yourself, you’re not going to get anywhere. You need to learn how to be on your own.

This past year, I really found who I was. I found the activist inside of me that never showed itself. I think that happens to a lot of people in college when they become more informed about what’s going on. I’m a big activist for women’s rights, and I think that was something that I wouldn’t have discovered about myself if I had stayed at home. I feel strongly and believe so much about women’s rights because it’s so important. While a UTSA, I found the activist inside of me, and she’s not going to shut up anytime soon. It was kind of a culture shock to my parents. They were like, “What’s going on?” I’m the complete opposite of my older sister. She was never like this. I say everything on my mind, and I don’t leave anything out, because if you don’t say it now your moment has passed.

There’s a lot of lessons you learn in college, but, for me, that was the biggest one. You have to be your own person, and you have to love the person that you are in order to love everybody else. I still have a long way to go though.”