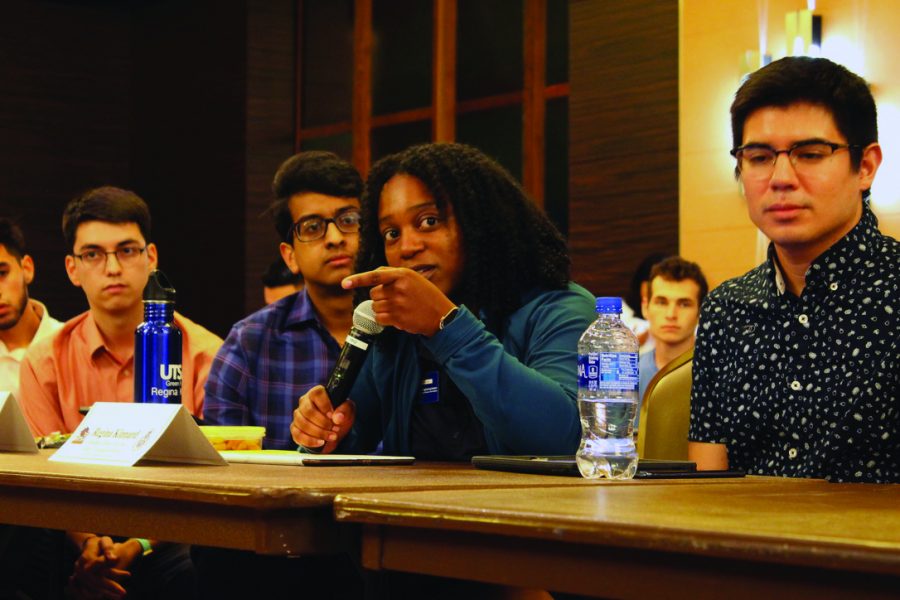 The 2019-2020 budget for UTSA’s Student Government Association (SGA) was approved during the 8th Session of the 44th General Assembly. The budget is funded via Student Services Fee S001 which mandates students to pay $16.18 per semester credit hour with a maximum charge of $194.16 per semester.

“The Student Services Fee is allocated by a committee comprised mostly of students and is dependent on student enrollment numbers. SGA currently receives less than one-half of one percent of the Student Services Fee,” LT Robinson, UTSA senior vice provost of student affairs and dean of students, said. “SGA approves an operating budget each year that includes an evaluation of its functions and costs and how to allocate resources to them.”

After the presentation, Kaitlyn Law, executive assistant, motioned to move $6,000 of the unallocated funds into a University Life Awards (ULA) line item under Director Programming.

Gage Martin, sophomore senator, seconded the motion, which then moved the topic into discussion. Taylor Edwards, College of Liberal and Fine Arts senator, took a stance against the motion.

“I am against this because I think the money could be better spent in the Judicial Branch for our elections in order to encourage more voter turnout,” Edwards said.

“I feel like [the Judicial Branch fund is] an okay amount to leave it at, just because of the history of it being very low. We only spent $130 in one day. We still have over $700 left in there for future elections,” Gonzales-Ruiz said.

Martin also commented on his support for the motion.

“Just a reminder that our Constitution’s-Section 2 Article H is to make opportunities for our constituents,” Martin said. “So, without providing the $6,000 in funds to the ULA, that’s taking a bunch of awards from people that are being honored by the administration, and I think it’s important for us to bridge that gap a little bit so our students can get recognized.”

Law interjected with a point of information, and she stated that the unallocated funds could be moved at anytime with a future vote, which evoked a response from Edwards.

“I completely understand what you’re saying; however, we just cannot leave tonight without putting more money into the Judicial Branch. Luke is right, historically it’s always been low and you know what else has also been historically low? Voter turnout,” Edwards said.

Amid the back-and-forth, Chief Justice Kinzy Bucey stood up to dismiss herself from the room.

“We just got roasted about elections,” Bucey said as she proceeded to leave the meeting.

Bucey expressed her disapproval over the $830 allocated to the Judicial Branch for the fall and spring semesters.

“Each exec-member gets more money than the whole Judicial Branch,” Bucey said.

Following her departure, the floor was then called to a vote. While the rest of the SGA senators voted to approve the budget, two senators voted against the approval: Edwards and Claudeth Garcia, speaker of the senate.

With SGA’s budget now approved, Department and Committee Programing may now move forward with plans for the 2019-2020 school year. SGA’s next general meeting will be held on Sept. 26 in the Denman Ballroom inside the Student Union.