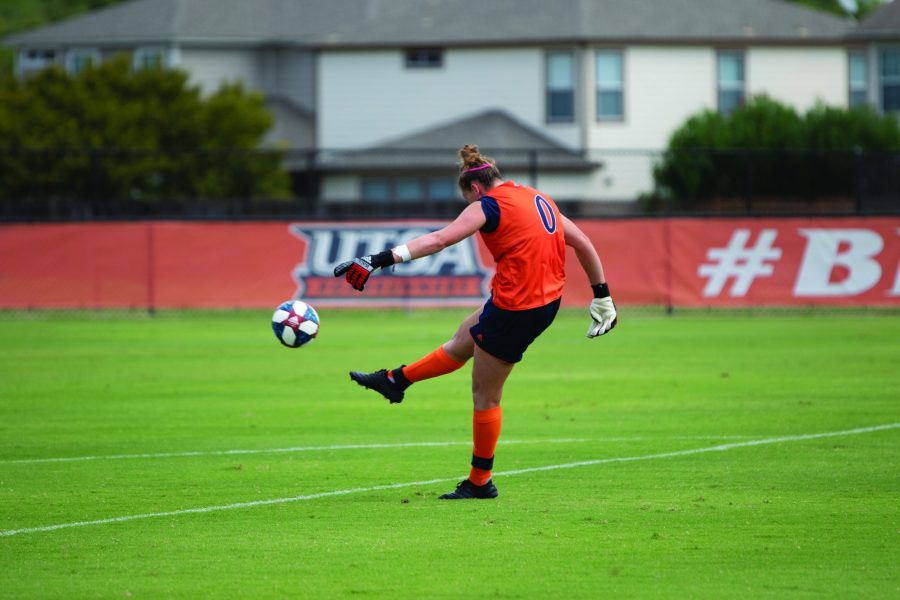 Sophie Milich kicks a ball back into play. Photo by Lindsey Thomas

UTSA Soccer (4-3-1) fell 3-4 to the Middle Tennessee Blue Raiders (4-5), beginning their Conference-USA (C-USA) play with the Jurassic Park West themed game. The ‘Runners began C-USA with a 0-1 record. The heat played a big factor in the first half.

The action kicked off early with the Blue Raiders forcing goalkeeper Sophie Millich to make an early save in the 3rd minute. In the 4th minute, MTSU scored first after a loose ball fell to forward Peyton DePriest.

The ‘Runners would equalize in the 26th minute after Ellis Patterson had a sprint down the left hand side and fired a cross to Lexi Bolton, who then flicked it over to a wide open Abby Kassal for the goal. Opportunities in the rest of the half were sparse for both teams, with each defense proving to be very tough to break down.

However, in the 34th minute, a free kick from the halfway line by Kendall Kloza sailed into the box and was headed on by Nicole Galan, but her attempt sailed just shy of the left post. The ‘Runners would enter the half tied 1-1 coming out much stronger in the second half.

A minute after the second half began, Kassal found herself wide open and fired a curling effort that was tipped over the crossbar by the MTSU keeper. In the 49th minute, a ‘Runners’ corner kick found the head of Deja Sandoval, who easily put it past the keeper. Middle Tennessee would soon equalize again in the 58th minute thanks to a goal from from Mackenzie Bonham, after a cross sailed her way and she fired it past Millich.

The ‘Runners would then fire a barrage of attempts at the MTSU keeper in an attempt to break the deadlock. The 65th minute would see a corner kick find the head of Kloza whose header rattled the post and trickled back into play. Karlee Willey fired a shot on goal that was initially fumbled by the keeper but eventually cleared by her defenders during the 67th minute.

The deadlock broke in the 68th minute after a deflected pass found its way to Patterson who was on goal and fired a low shot to the bottom left corner, giving the ‘Runners the 3-2 lead. In the 83rd minute Millich came up with a big save that she managed to put over the crossbar and keep the ‘Runners ahead.

Middle Tennessee would equalize with mere seconds left in the second half after an errant header by the ‘Runners found its way to Bonham who put away her second of the afternoon. The ‘Runners would fall in extra-time after what seemed to be a simple cross sailed into the box and bounced off the crossbar and into the back of the net.

UTSA will be back in action Sept. 29 at Park West against the Rice Owls. The game is set to begin at 1p.m., come out and support your fellow ‘Runners!