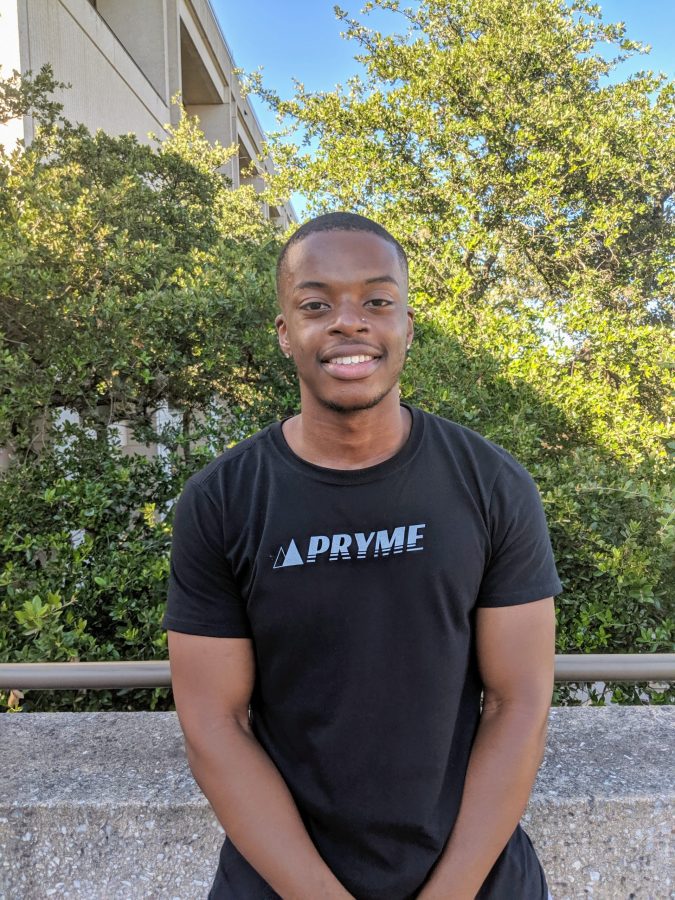 This is Justice Falade. He is a senior and an electrical engineering major. He only wants the best for his future, and his ambitious spirit is helping him get there. This is his story.

“Back to my first day of 9th grade. You want to make sure that you look good on your first day of high school. I asked my mom to buy me some stuff, but we weren’t really rich. She got me two shirts and a pair of shoes. I wanted more, but I didn’t have a job, so I didn’t complain. I had also asked her for a haircut, but I wasn’t able to get one. At the time, I thought I wasn’t able to get a haircut because she wasn’t able to afford it, but later on she told me that it was because I was in trouble. I don’t think that’s true, but it’s whatever. I ended up having to go to school with no haircut. I felt very self-conscious. In high school, everyone wants to be cool, and I wanted to look fresh on my first day, but that just didn’t happen. I got home day and I was really upset. I wasn’t really upset with my mom. I was mostly upset with the situation that we were in. If I can’t ask my mom for stuff, then I guess I have to start doing things for myself. I never wanted to have to experience the embarrassment of not getting a haircut again, so I learned how to cut my own hair.

If you would describe me in one word, you could say that I’m very ambitious. I’m a go-getter. When I was in 9th grade, and I experienced not being able to rely on my mom, I realized that I had to step up. I was too young to get a job, so I had to figure out something else to do. I tried find ways to make money, without being of age, on Google, and I came across a website where you do surveys and they pay you in points. The payment was terrible. I calculated my earnings, and I was making roughly $50 every week or two. I earned up to $10 a day maximum. I grinded until I was able to afford clippers. It was cheap: only $30. I would easily be able to afford it now, but, back then, I had to work so long for something so small. This moment in time is what made me realize that if you want something in life you have to go get it. There’s no point in asking or begging. If you want it, go get it. You can’t wish upon it. After that, I continued to find other opportunities to make money. That was a moment that shaped my life. If I didn’t go through that experience, I wouldn’t be the ambitious person that I am today.

I grew up watching Jimmy Neutron, and I wanted to be like him. I was always into electronics, how things work, and building stuff. When it came down to picking my major, I always knew that I wanted to do something creative with a combination of math. At first, I chose architecture, but I changed it to electrical engineering because the architecture school is downtown, I wanted the full college experience, and engineering is up my ally anyways. When I first got to UTSA, I was caught up in the college life. I was always ambitious, but I kind of lost sight of it. Regardless, I was still making good grades. One summer, I was looking at the music video to Freaky Friday by Lil Dicky and Chris Brown, and Chris Brown says, “I drive this Ferrari and I’m light-skinned black.” It made me think, ‘Chris Brown has a Ferrari. Why don’t I?’ My whole viewpoint is, ‘If you want something, why don’t you have it?’ If I want a Ferrari, why don’t I have one? I don’t think that Chris Brown is better than me. Well, he’s better at singing than I am, but I don’t’ think that Chris Brown is a better human being than me. It would be different if I didn’t want a Ferrari, but I do want one, and I was in the living room wasting my time. What’s the difference between me and him? He worked for what he wanted, and that’s when I started to shift my mindset. I grew up without a lot of money, so I knew that I needed to be rich, but instead of becoming rich through engineering, I want to do more.

There are people my age that are doing crazy stuff. Why am I just sitting here? I want to be an influencer. I want to be out there. I want to be making money. I was talking to my friend Ikechi, and I told him, “We’re young. We have to use this time to do something drastic. We need to do something crazy and fun. We need to do something.” We wanted to make money doing something that we were passionate about. We were into film, so we tried that, but it did not work out. Then, we were approached by this guy. There are very few people that I can say have changed my life, and he is one of them. He proposed to us to run his fitness brand for him. This was maybe two days after I had talked to Ikechi. This was our opportunity to do something great, and it actually worked out for us for some time. I love working out, owning a brand, and working on my own stuff. Unfortunately, that business venture didn’t work out for us in the end. I was very upset at the time. I was young and naïve. I just wanted something to change my life, and I felt like it was snatched from right under me. We thought about doing our own thing, but we would have to start all over, and we didn’t even know where to start. How could two juniors create a whole brand? The idea seemed  unfeasible, but I thought about it some more and talked to Ikechi again. I said, “Look Ike, I want to build a dynasty here. This is something that we’re still into, and I want to leave an imprint on the world.” Engineering wasn’t big enough. I wanted something more. We sat down, got things done, and worked to start our fitness brand. It was so stressful trying to figure out what we were going to name our brand, how we were going to market it, afford a website, and so many other things, but it feels so good to see how far we’ve come since we started. Every day, my focus was all about the business. I watched countless YouTube videos and invested in courses. I just have to get this. I can’t let this fail. Right before we released, I was having some doubts. I was thinking “what if” this and “what if” that. Right after those thoughts, I told myself, “No. I will not fail.”

I love it when people hit me up to tell me how much they love Pryme, and me and Ikechi are just doing what we love. I just thank God. I think back to a year ago when I was in class. All of the engineering stuff is cool, but I wanted to make a stamp on this Earth, and I feel like I am on the right path right now. A lot of stuff that people want to do, they think that they can’t do it because they don’t think that they have the resources. If you want something, go get it. Doing this has given me so much confidence.”