The only solution, is a communist revolution’ 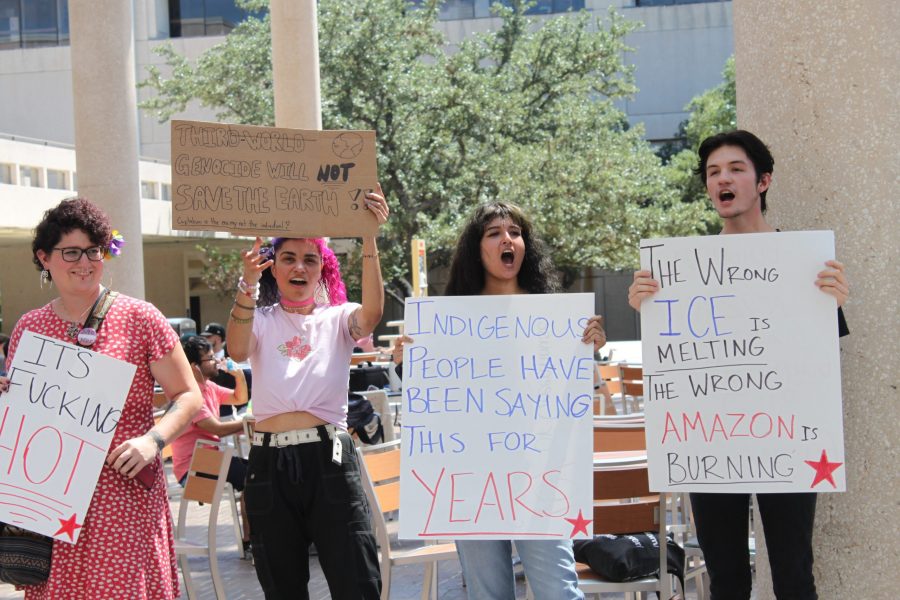 “Climate change is not a lie, do not let our planet die,” was one of the chants heard in the Sombrilla Plaza on UTSA’s Main Campus Sept. 25. Red Star Magazine, a leftist digital publication, organized a climate strike in support of Climate Week 2019. Student protestors stood in front of the Sombrilla Plaza fountain holding signs and chanting their concerns.
The strike was organized by Basseema Abouassaad, a junior political science major and co-founder of Red Star Magazine, who elaborated on the motivation behind the protest.
“We noticed there has been a global movement going on for the past week to start a lot of climate strikes around the globe, so we figured what better place to have one of our own than a college campus,” Abouassaad said.
Several students approached the protestors, asked questions and engaged in dialogue.
“My question was whether they had any ideas of a solution,” Daniel Bonner, a sophomore history major, said. “We found common ground on the fact that it all really comes down to consumer needs.”
During the strike, protestors walked through the first floor of the John Peace Library with signs reading, “Climate change is science, not politics” and “Capitalism is the problem.”
“We’re not out here expecting to change the world with one protest,” Abouassaad said. “We wanted to make things blunt and in your face to attract people, to get them to ask questions that they typically wouldn’t think of.”
The strike then moved in front of the McKinney Humanities Building (MH) where the protestors lined the entrance. Students leaving the building were met with additional chanting, such as “System change not climate change.”
“I think something definitely needs to be done about climate change, but they’re in front of the MH, and people are trying to get to class,” Mitch Jefferson, a sophomore physics major, said.
The climate strike lasted about one hour and concluded with the protestors walking back to the Sombrilla Plaza chanting, “The only solution is a communist revolution.”