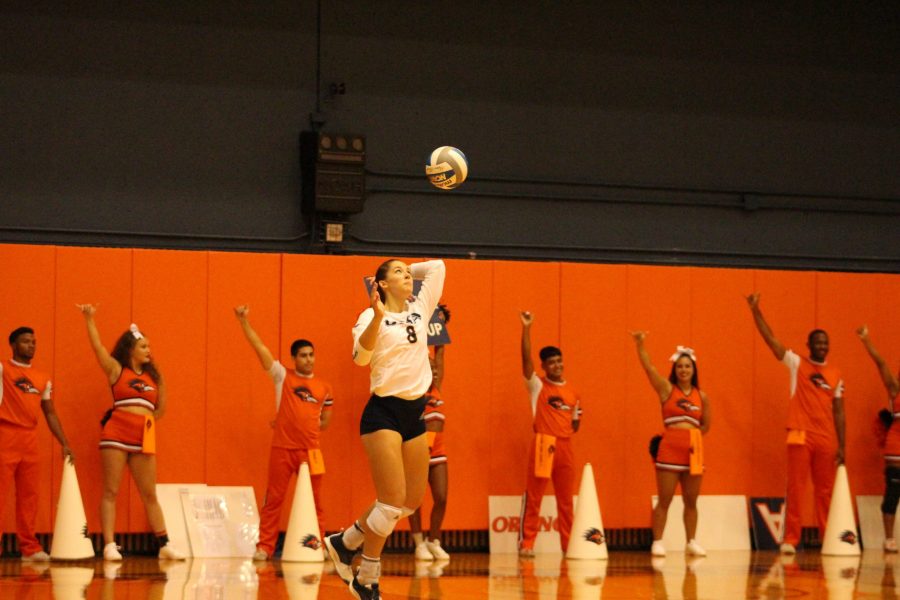 Courtney Walters serves an ace against the Charlotte 49ers. Photo by Julia Maeinus

The UTSA Roadrunner volleyball team (9-6, 2-0 C-USA) hosted the beginning of Conference-USA (C-USA) play on the court of the Convocation Center. The ‘Runners faced the Charlotte 49ers on Friday, Sept. 27 and the UTEP Miners on Sunday, Sept. 29.

The ‘Runners opened conference play by sweeping the 49ers, 25-20 25-21 25-20. Sophomore Hannah Lopez recorded her fourth double-double of the season with 13 kills and 10 digs. The ‘Runners opened with a strong offense, activating their blocks, jumping out with a 5-1 lead. Senior Brianna McCulloch carried the tip game of the breakout offense as the ‘Runners led 10-4, forcing the 49ers to take a time out. Coming out of the timeout, the 49ers held a one point lead over the ‘Runners, deferring two set points before McCulloch capitalized on a kill to end the first set 25-20.

The 49ers came out strong early in the second set claiming the lead. The ‘Runners suffered passing and blocking errors that set them behind, but they finally regained their momentum, tying the game at 8-8. The ‘Runners defense held their own against the offensive front of the 49ers’ front row. Sophomore setter Mia Perales knotted the game 14-14 with a service ace, allowing the ‘Runners to push ahead and use a hitting error from the 49ers to claim the set 25-21.

In the third and final set of the match, the score was neck-and-neck with 11 ties and four lead changes. The ‘Runners forced multiple timeouts in the third set as the score remained within two points throughout. Lopez and McCulloch registered multiple blocks that allowed the ‘Runners to jump ahead as senior libero Emily Ramirez ended the match, 25-20, with a service ace.

The ‘Runners hosted the University of Texas-El Paso Miners for the second conference match on Sunday, Sept. 29. The ‘Runners dropped one set, but claimed the game in four, increasing their C-USA record to 2-0.

During the first set, the Miners held the ‘Runners at a distance, utilizing their front row. The ‘Runners dropped the first set 25-18, but sophomore Kirby Smith registered her eighth double-double of the season, 17 kills and 13 digs; Perales claimed her second with 19 assists and 12 digs.

The ‘Runners jumped into the second set with determination. Keeping the Miners at a one point advantage, the ‘Runners recorded a 13-0 run. After trading points with the Miners, Bianca Ejesieme registered the final kill of the set, evening the match with a set score of 25-13.

The ‘Runners regained their momentum by registering a 15-6 run in the third set. Capitalizing on passing errors, Perales claimed her third service ace of the game to score the set win at 25-14.

Walters earned Conference USA Freshman of the Week, the first such award of her career. Walters registered a team-high 40 assists, while adding 15 digs and three service aces in two victories to open the conference schedule. She recorded 21 assists, seven digs and two aces against Charlotte Friday. The rookie added 19 assists and eight digs Sunday, helping the Roadrunners to their 13th consecutive victory in the series with UTEP. Walters leads UTSA with 340 of the team’s 706 assists and her 6.54 average ranks 10th in the league.

The ‘Runners will be back in action Friday, Oct. 4, in Houston, Texas, as they face the Rice Owls for the third match of conference play.