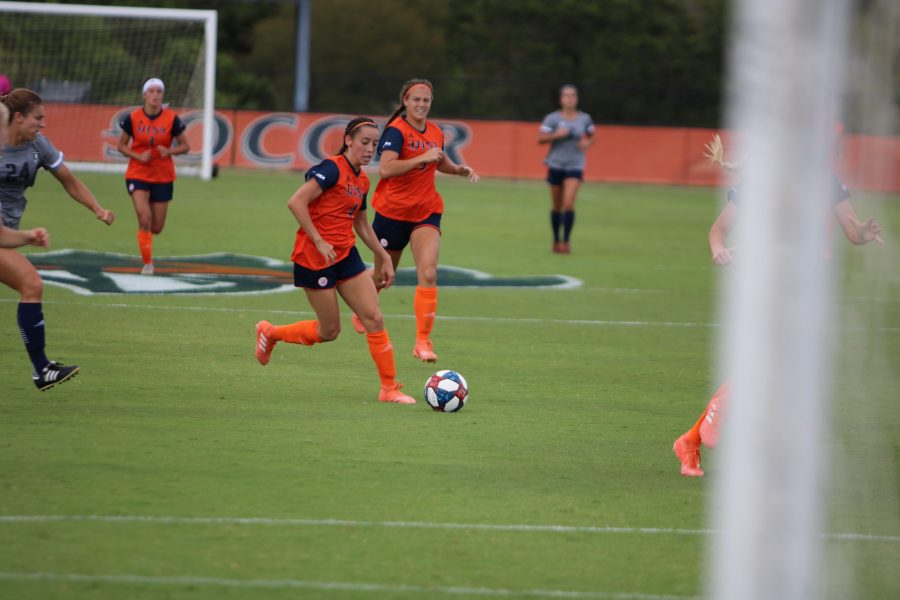 Lexi Bolton runs after a ball. Photo by Donald Escamilla

The Roadrunners once again suffered a late heartbreak when they fell 0-1 to the Rice Owls on Sunday afternoon. The late loss drops the ‘Runners to 4-4-1 with a 0-2 record in Conference-USA (C-USA). Opportunities were sparse in the first half for both teams. In the 10th minute, Rice found a way behind the ‘Runners’ defense, but Jill Schneider managed to make the save. In the 13th minute, Abby Kassal got on a loose ball and fired a shot on goal, but it was easily saved by the Owls keeper Maya Hoyer. In the 22nd minute, Rice managed to find open space near the box to fire a shot on goal, but Schneider was there to make the save.

The ‘Runners came out strong in the second half. Lexi Bolton shot a hard cross into the box in the 51st minute, but the ball was swept up by the keeper. In the 53rd minute, Kassal fired a shot on goal but her attempt was just wide. The ‘Runners best chance of the afternoon fell to Camrynne Hoover at the edge of the box from a corner kick, but the Owls’ keeper somehow managed to just tip the ball wide.

The final 10 minutes of the game was a barrage of attempts from Rice. The 81st minute saw a shot attempt fly wide of the goal. In the 84th minute, Schneider made a leaping save to keep the ‘Runners even. Defender Sarah Bayhi came up clutch in the 86th minute after a Rice cross made its way past all defenders, even Schneider, forcing Bayhi to make a sliding clearance. Just a mere minute later, Rice lobbed the ball into the box that hit the crossbar and fell out for a goal kick.

The games only goal came to Rice in the 88th minute. After a scramble in the box, Madison Kent managed to sneak past Schneider and send the ball into the back of the net. This was the ‘Runners second straight defeat in the closing seconds of a game. Come out and support your fellow ‘Runners again on Sunday, Oct. 6 at 1:00 pm at Park West against The University of North Texas.