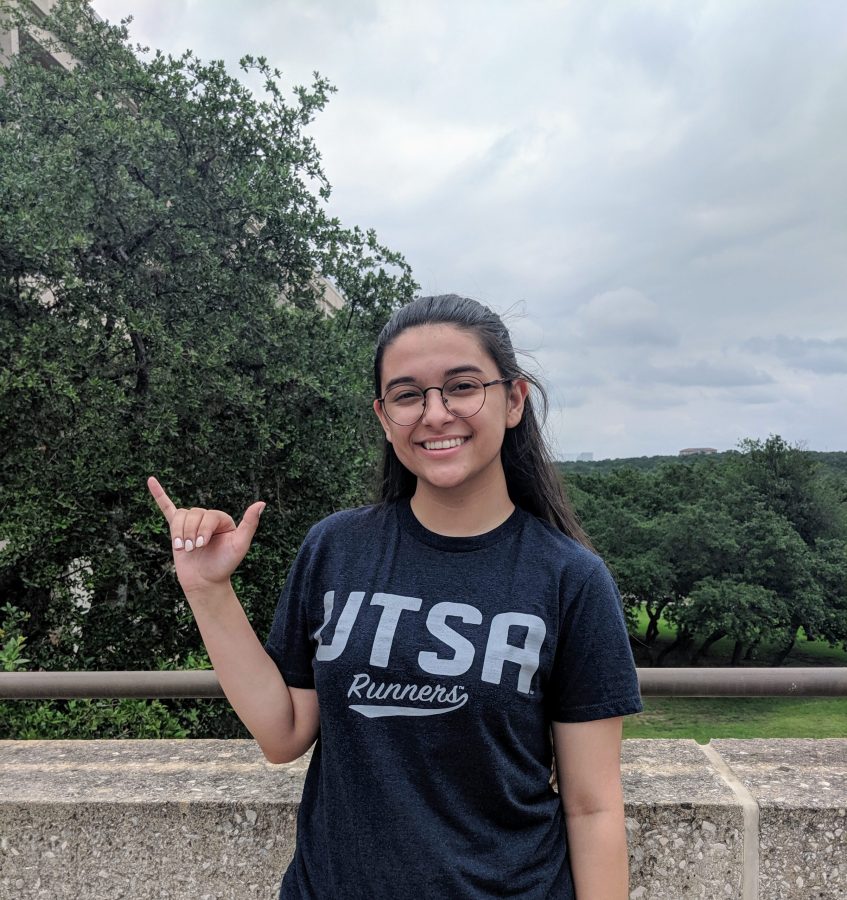 This is Nadia Higgins. She is a junior and a biochemistry major. San Antonio raised her, and she’s going to take what she gains from UTSA and give it back to the city. This is her story.

I’ve lived in San Antonio for my entire life. My father is a UTSA alum. He graduated in 1980 when the campus was totally different. My mom also came here, but she didn’t finish her degree because she got pregnant with my older sister. Then, my older sister came here, and now I’m here. We’re just a family of Roadrunners which isn’t that common because the university is still new.

I love meeting all the different types of people here. UTSA is lucky to have more diversity than other universities. I’ve been to schools where everyone looks like you, and that’s cool because you can relate to a lot of people, but you don’t learn anything new. You never get a different perspective or any idea of what goes on outside of your culture or your community. My high school was very diverse, and, when I got here, I’m hearing about things I’ve never heard of before and issues I wasn’t even aware of. I cringe thinking about if I had gone to a university that had people who all looked like me. I’m grateful for that.

I think there is an evident divide between certain groups of students here. There is a wonderful active community within UTSA, but it’s quite a bubble. I’m a huge proponent of the idea that everyone is entitled to their opinion and they can say what they want, even if it’s stupid, but we’re allowed to call them stupid for it. You have to listen to everyone. That doesn’t mean that you have to agree with them or say nice things about them, but if you’re not willing to listen and learn something new, you’re never going to get anywhere. I would really like to see that evident divide dissolve between the groups, but that’s not just a university problem. That’s a world problem.

I want to be a pharmacist. I always knew that I wanted to go into some sort of science. I wasn’t sure what for, but I wanted to be an advocate for minorities in science whether it be racial minorities, women, or LGBT+. I started to expose myself to the different scientific communities and the people prominent in these fields, and they weren’t racial minorities, women, or LGBT+. You really need that diversity in order to learn and grow as a person. I saw the lack of diversity affect the research that was going on in a community of all older white males. They haven’t even considered this other perspective, and the only reason that I have considered it is because I am female, Hispanic, and LGBT+. I think that is just so important, and I really want to spread the message that science is open to everyone.

When I was in kindergarten, I remember my dad walking me up the stairs holding my hand and we were talking about presidents. I was just finding out what a president was, and he said that they’ve all been men. I said, “Well then I’m going to be the first girl president, duh.” He then said, “Of course you are.” So, I go into my kindergarten class and I wasn’t even thinking about it for the rest of the day, but I went up to my teacher and said, “I’m going to be the first girl president of the United States.” She says, “Oh, you don’t want to do that. That’s more of a man’s thing. That wouldn’t be very fun,” and she just dismissed me off. I didn’t think about it at all. I thought, “Well in that case, I won’t do it then.” It wasn’t until high school when I looked back on it and I knew that she didn’t have any bad intentions, but what a terrible thing to tell a child. I just think about how impressionable I was at that age. Someone who I thought of as an authority figure told me, “You don’t want to do that. That’s more of a man’s thing,” and I just never thought of it again. I don’t want to be president now, but, if that were a dream of mine, I’m scared of how that would’ve affected me. It could have affected my self-esteem, my perspective of myself, or how I would’ve gone towards that goal. I think about that a lot. Sometimes it worries me. I hope that things have changed since 2004. That was a long time ago, but its my job to never say anything like that to a child. Never tell any child that whatever they dream of is out of reach for them. I think about my future children a lot because I want to have a family. I’m always thinking about the things that I am going to tell them. That definitely shaped me, but not until I was older.

I think it’s really important to be a roadrunner because I noticed that most students dismissed UTSA as a backup school or that small, local university. I never had the desire to go to another university or an ivy league. I just think its so important to give back to your community. I don’t think that anyone has an obligation to stay where they were born, but I have such a deep connection to San Antonio. I adore the city that I’m in. Everyone who knows me, knows that I don’t ever want to leave. San Antonio raised me and gave me so much that I feel like it’s my obligation to give back. I want to be apart of San Antonio’s biggest and best university. I want to work here and contribute here instead of going to UTSA, taking all that it has, and leaving.