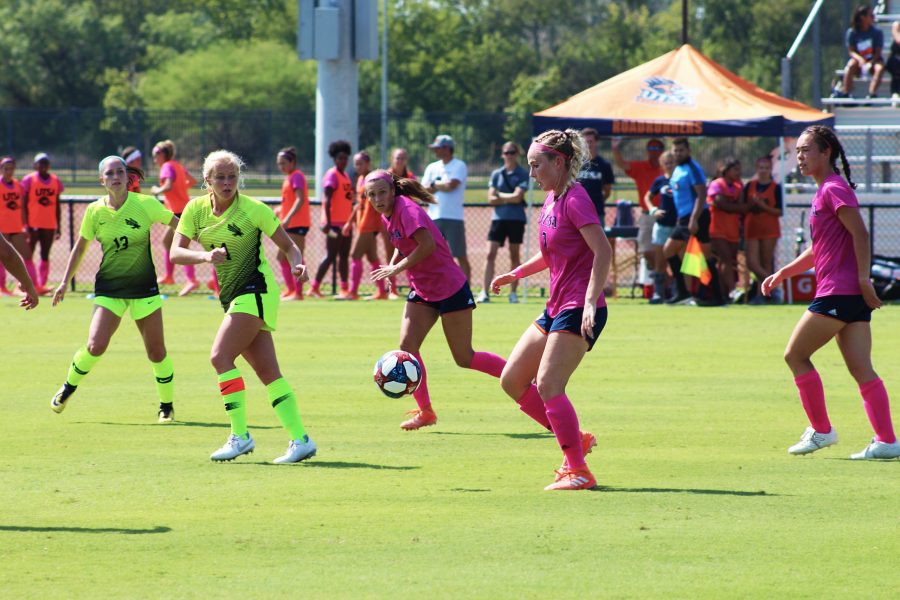 The ‘Runners suffered yet another close loss as they fell 0-1 to the North Texas Mean Green on Sunday afternoon. In the 2nd minute, Lexi Bolton was played through on goal, but her attempted shot was tipped just wide by keeper Kelsey Brann. In the 9th minute, a ‘Runner goal kick was errantly flicked back by a Mean Green player that Bolton quickly capitalized on, but Brann made a great diving save. A minute later, the Mean Green found open space in the field where a cross from the left-hand side found the head of Elle Marie DeFrain who headed the ball past Jill Schneider to give North Texas the 1-0 lead. In the 15th minute, Berklee Peters maneuvered her way in and around a couple of ‘Runner defenders only to have her shot sail over the goal. The 19th minute saw another Mean Green attempt on goal, a dangerous ball played into the box that found the head of Allie Byrd, but her header sailed just wide. Ellis Patterson had a couple attempts to put the ‘Runners back in the game. In the 20th minute, she fired a ball across the face of the goal, but nobody was there to put the ball away. In the 27th minute, she took a corner kick that appeared to be headed directly for the top right corner, but Brann tipped the ball wide.

The second half was slower paced than the first with sparse attempts from both teams. In the 57th minute, a ‘Runners corner found Kendall Kloza, but she did not fully make contact with the ball, and Brann made the save. In the 60th minute, a cross inside the box found the head of Nicole Galan, but her attempt was saved by Brann. A minute later, Karlee Willey weaved her way around a few Mean Green defenders to shoot on goal, but her attempt never left the ground as Brann easily scooped up the ball. The next ‘Runner attempt came in the 76th minute when Patterson played the ball to Galan, but her shot sailed over the goal. With the loss, the ‘Runners fall to 4-5-1, 0-3 in Conference-USA, while North Texas improves to 9-4 and 4-0 in Conference-USA. The ‘Runners look to rebound from the loss this weekend when they travel to Florida Atlantic on Friday, Oct. 11 and then to Marshall on Sunday, Oct. 13. The final two home matches for UTSA will take place starting Thursday, Oct. 17 against Southern Miss, with the final home game coming on Sunday, Oct. 20 against Louisiana Tech. Admission is free to all home games.