Athlete of the Week: Nicole Galan 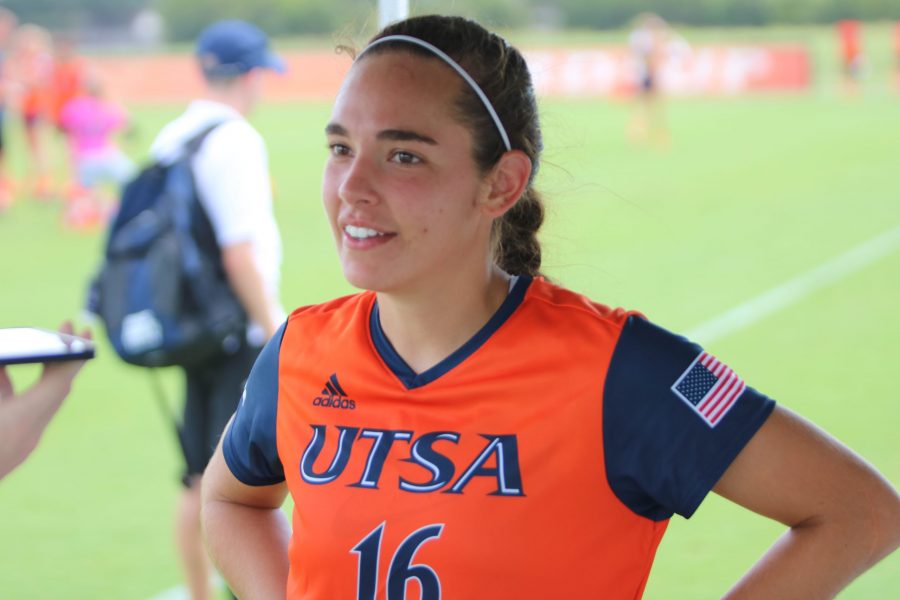 Senior Nicole Galan is entering her fifth season as a midfielder for the UTSA Roadrunner soccer team. After three seasons of play, Galan has recorded one goal with two assists in 47 total games for the ‘Runners.

“I’m from San Antonio, where I attended Reagan High School, and [I] picked UTSA due to my incredible first visit,” Galan said. “I just felt so at home.”

Galan is a medical humanities major currently working on her Master of Science in Business.

“I have interest in pre-med, but I didn’t want to be consumed by just science, which has led me to a mix of biology and public health with medical humanities,” Galan said.

Having played since she was a child, her love for the game of soccer has lasted for the majority of her life. Galan played club ball for Lonestar SA 97G Red along with playing for her high school team. She has logged over 2,150 minutes in her career.

Galan was designated a medical redshirt her freshman season, and she has began her last year as a ‘Runner for the 2019 season. She has continued to make an impact on and off the field by taking pride in being a veteran leader.

“The success I have as a player is based off the help of my teammates,” Galan said. “As long as the team benefits at the end of the day, I have done my job.”

Galan puts the goals of the team ahead of her own success because she is more focused on winning than personal statistics. During the 2018 season, Galan played in nine games off the bench, having five shots and three on goal.

“Sticking to our team values will be key the rest of the season,” Galan said. “It’s about how we react to losing by bouncing back and always looking for more things to improve upon.”

Galan recorded one goal, two assists and 12 shots during the 2016 season, playing a career high of 19 games, starting all of them. Her only career goal came against Texas A&M-Corpus Christi. She played 90 or more minutes in 17 out of 19 matches.

“My family plays an extremely important part in who I am today,” Galan said. “My parents push me to not only be successful on the soccer field but in the classroom as well.”

With her fifth and final season underway, Galan chooses to focus on achieving the team goal of a winning season and competing in the Conference USA Championship. She has played 10 games in the 2019 season, recording one goal and two assists along with seven shots, two on goal.

“It’s my last season, so I have to go all out,” Galan said. “This is the last ride with these girls, so I’m trying to win.”