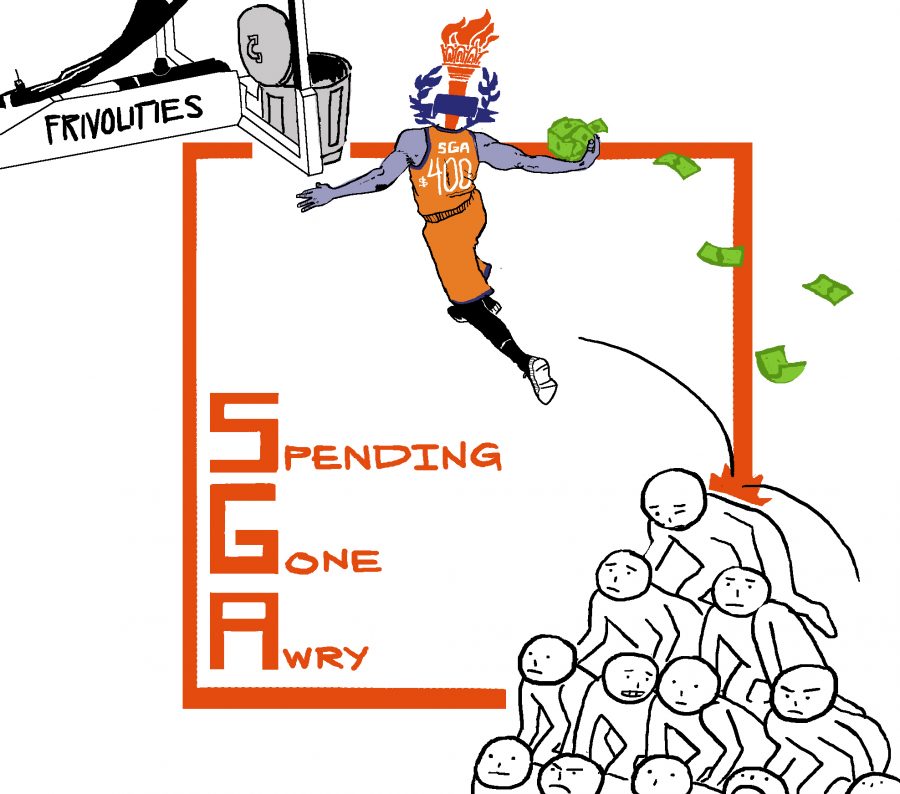 SGA’s dense chronology of irresponsibility has just been updated with another embarrassing entry about their misuse of student funds. After weeks of student-led protests against SGA’s spending habits, SGA stoked the fire by throwing away over $400 in unfilled seats on their controversial leadership summit at John Newcombe Tennis Ranch. This enduring controversy is the latest example of how SGA is not worthy of student funding.

As the self-proclaimed “sole voice of the student body,” SGA is more representative of their own self-interested voices. Two weeks ago, the dissenting voices of student protestors filled the halls of SGA’s open forum expressing their disapproval of poor PR efforts, the organization’s exclusivity and SGA’s questionable spending habits. The protesters held signs that read, “NO WAY NO HOW NO TRIPS FOR SGA.”

SGA claimed they could not make changes or cancel their reservation at John Newcombe Tennis Ranch because they had spent the money before their General Assembly voted on the authorization of the expenditure. In other words, the student protests took issue with poor budgeting decisions that had already been made. Nevertheless, these students’ efforts to hold their representatives accountable proved unsuccessful when SGA allowed over $400 to be thrown away during the summit.

The wasted $400 is a fraction of SGA’s $40,000 student fee-funded budget, and many students took no issue with SGA’s decision to allocate nearly a third of its entire budget at John Newcombe Tennis Ranch for a leadership summit. However, any amount of wasted student money is unequivocally irresponsible. If SGA had an ounce of prudence, then they could have anticipated the expensive consequences of unfilled seats and avoided wasting student funds. Moreover, they could have hosted the summit at a more reasonable, less luxurious, venue.

In the grand scheme of SGA’s $40,000 budget, $400 seems like an insignificant amount. However, $400 can be objectively useful anywhere other than in the trash. For example, the Judicial Branch, which is responsible for holding all student body elections, was allocated only $800 for the year. A $400 increase in the Judicial Branch’s budget could potentially be used to increase voter turnout, which has yet to reach more than three percent of the student body this year. Any amount of student funds is significant, especially when it is used responsibly.

Clearly, our SGA representatives spent too much time around the bonfire and not enough time learning how to properly manage funds coming out of students’ pockets.