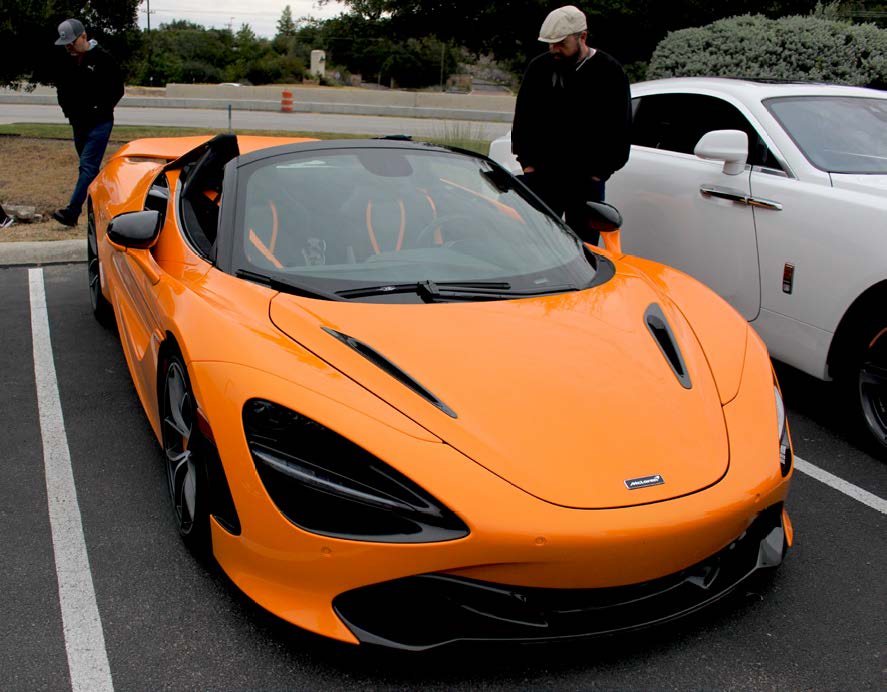 On the second Saturday of each month, local car enthusiasts come together to indulge in their form of artistic expression. From muscle cars manufactured in 1964, to supercars with top speeds of 210 miles per hour, Cars and Coffee brought an incredible amount of diversity to the car community of San Antonio. There was a sense of comradery among car enthusiasts which cultivated a welcoming aura throughout the event. It was evident that people found immense joy in sharing their passion for building, buying or maintaining their vehicles. Not only did this event encapsulate the simplicity of appreciating a collection of vastly different cars, but it introduced a new world to each first timer.

With supercars like McLarens, Ferraris and Lamborghinis lining the first row, it was easy to become mesmerized by the vibrant, futuristic atmosphere the cars provide. Seeing these beautiful pieces of machinery might intimidate a first timer, but speaking with the owners can ease any feelings of uncertainty. The owner of a Porsche 911 Turbo S told a captivating story.

“I have a group of friends who are Ferrari owners and we take our cars out to race every so often. We found a track to race on and I beat them all! My car hit 170 miles per hour and had I not run out of track, I would have topped it out at 195!” John said.

The excitement in his voice as he spoke about the cosmetic and mechanical modifications he made on his car was easily one of the most authentic aspects about this car meet. Each owner carried stories about their first cars and their progression towards owning the ones they dreamed of having. Supercars, however, were not the only vehicles that attracted a sea of people. Customized daily drivers that represented classic styles like hot rods, European cars and four wheel drive trucks were also a huge hit with the car community. Aftermarket wheels and entirely new engines were encompassed by a unique narrative that only a car lover could convey. Characterized by hearty roars to life, Volkswagen Rabbits and Datson 240z’s were the backbone of this meet. Without the appreciation for one-offs and rebuilt cars, one could not experience the undying thrill of Cars and Coffee.

Mesmerizing cars and animated owners were the center of attention during this experience, but the community surrounding events like this one should not go unnoticed. A tent decorated with coloring books, snacks and a sign that said “Cars and Kids” was set up in the corner of the lot. The founder revealed “Cars and Kids” as an organization for children who come to car events like this one, often collaborating with another organization called “The Ferrari Kids,” which brings cancer patients out for a ride in a Ferrari and “makes them a celebrity for a day.” One of the most touching elements of this meet was the revelation that organizations like these enhance the lives of children using cars.

People associated with successful automotive businesses like Vault Auto Services spoke about their work and their reason for attending Cars and Coffee every month.

“The car community in San Antonio just keeps getting bigger and better. Being a part of something like this allows for people to become familiar with cars and learn about repairs we do for car owners,” a representative said.

Cars and Coffee connects a special community in San Antonio using self-expression and a love for automobiles. Such a unique event allows for the combination of interesting conversations, learning experiences and forming new bonds.