Athlete of the Week: Kara Teal 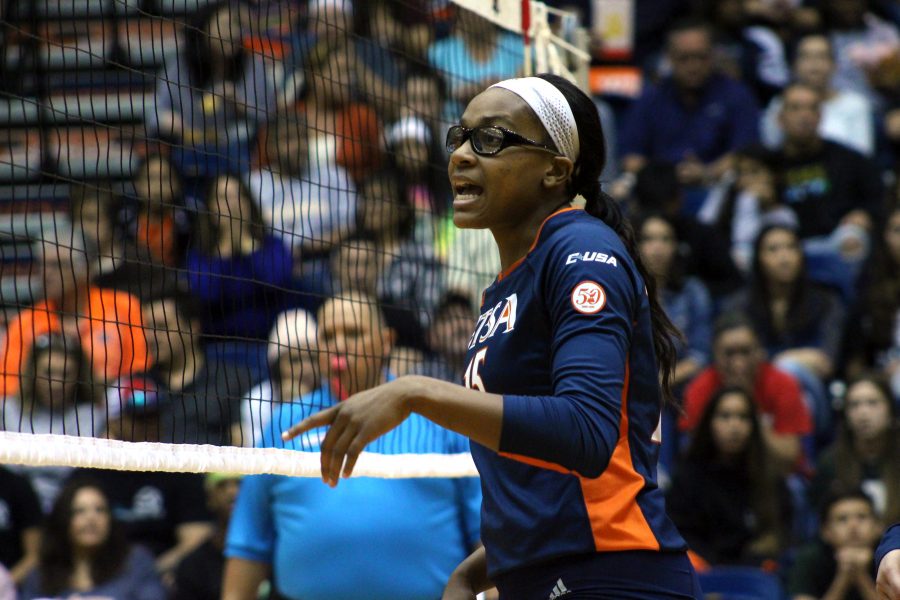 Kara Teal calling her hitters in the match against the Louisiana Tech Lady Techsters. Photo by Julia Maenius

Senior Kara Teal is entering her fourth season as a middle blocker for the UTSA Roadrunner volleyball team. After three seasons of play, Teal has recorded 656 kills, with a 1.93 kill percentage in 94 games played.

“I’m from Round Rock, where I went to Brentwood Christian High School,” Teal said. “I choose to go to UTSA because of the family atmosphere and to be close to my grandmother.”

Teal is a general business major and coaches youth volleyball in her free time.

“I’m not entirely sure what I want to do after college, but I enjoy coaching volleyball, so that might be an option,” Teal said.

Teal played club volleyball for Austin Juniors along with earning All-District and All-State honors in her past. She has played in a total of 340 sets throughout her career.

Since her freshman season, Teal has had a significant role on her team, appearing in 25 matches, starting in 19 and finishing the season with 66 blocks, ranking third on the team. Halfway through her last volleyball season, Teal felt she had become a leader by providing a veteran presence and keeping the energy high.

“We focus a lot on having a family atmosphere because when everyone on the team respects one another, it’s easier to succeed,” Teal said.

Teal’s number one focus is helping her team win every game. During the 2018 season, Teal started all 27 matches and played in 105 sets. She ranked eighth in Conference USA (C-USA) with a team-high 0.3 service aces per set, adding 3.16 points per set, which ranked 20th best in the league.

“We want to hang a banner here,” Teal said. “To do that, we have to come to work every single day and prepare better than our opponents.”

During the 2017 season, Teal started in 26 of her 28 match appearances for UTSA and recorded 14 double-digit kill performances, including a career-best 16 against Texas State. She registered a season-best seven blocks against Florida Atlantic University and Florida International University and posted a season-high six digs against Baylor. She finished second on the team in kills, with an average of 2.29 kills per set.

“My family affects my play a lot because the support they show me motivates me to go out and do better for my team,” Teal said. “I have at least one family member at every game.”

With her fourth and final season underway, Teal looks to bring her team to winning season and a Conference USA Championship along with an excellent finish in the NCAA tournament. After, 14 games into the season, Teal has played 41 sets with 57 kills and an average of 1.39 kills per set.

“This could be my last season playing volleyball,” Teal said. “I plan on leaving everything on the court in hopes of a conference championship.”