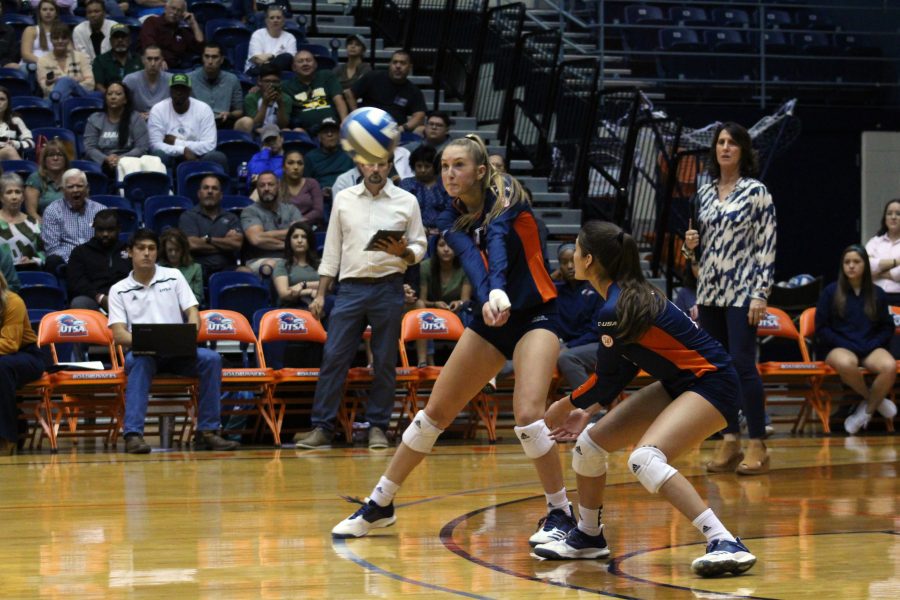 The UTSA Roadrunner volleyball team (11-7, 4-1 C-USA) left the Convocation Center with two more conference wins under their belts after the defeat of Louisiana Tech University and the University of Alabama at Birmingham.

Lopez began the second set with a 3-0 service lead, setting the tone for the set with a large point gap. The ‘Runners held the lead for most of the set, but the Lady Techsters closed the gap with strong attacks from the outside, challenging the ‘Runners’ blocks. Senior Kara Teal and sophomore Kirby Smith ran the ‘Runners’ offensive front as the Lady Techsters held off one match point before Lopez ended the set, 25-16, with a kill from the outside.

The ‘Runners opened the fourth set with a powerful front row force. After allowing the Lady Techsters to regain the lead, the ‘Runners trailed by one point for a large margin of the game. Ejesieme and Smith were the determining front row factors for this set, forcing multiple Lady Techster passing errors. Sophomore Mia Ibarra claimed the final lead with a strong service run before the ‘Runners forced a hitting error, winning the set, 25-18, and stepped away from the match 3-1.

The ‘Runners then faced the Blazers on Oct. 13 in a quick 3-0 match. Trailing in set one, the ‘Runners utilized two five-point runs. Smith and Ejesieme ran the offense, forcing multiple passing miscues by the Blazers. As the score approached the end of the set, each team went back and forth claiming the lead before the ‘Runners forced a Blazers hitting error and ended the match 25-15.

In the second set, the Blazers jumped out in the lead. The ‘Runners gave up multiple points from passing errors, but they managed to even the score at 12-12 with a kill from Smith. The score was tied again at 14-14 and 21-21 as each team remained neck-and-neck. Kills by setter Courtney Walters and Teal brought the advantage to the ‘Runners. Lopez claimed the set point with a line shot from the outside at 25-21.

The third and final set was a back and forth battle for the lead. The ‘Runners took the set and potential victory with a 14-6 run at the close of the set. Ejesieme ended the match, 25-17, with a kill from the right side.

The ‘Runners will be traveling to Hattiesburg, Mississippi, Oct. 18, to face the Southern Mississippi Golden Eagles.