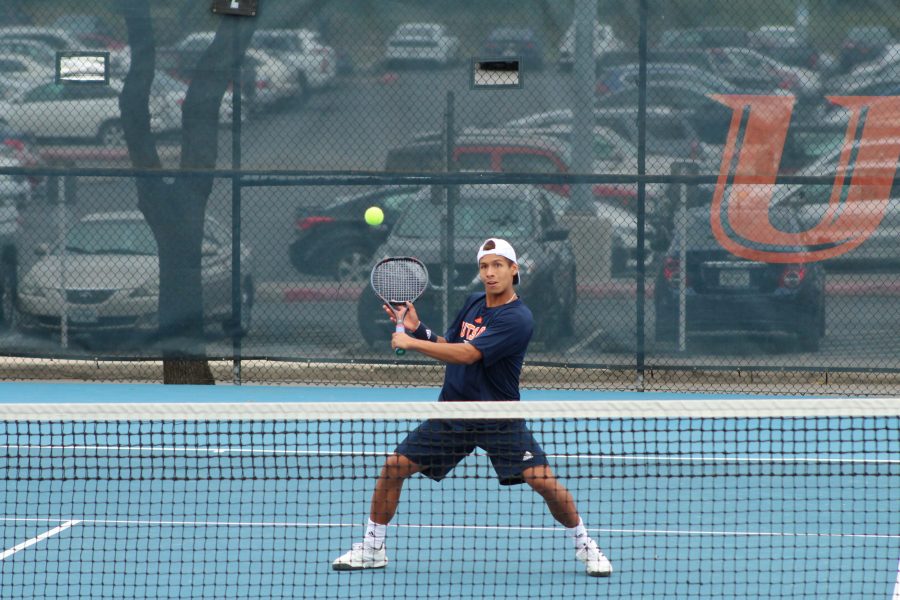 Alan Sanson receives a serve from his opponent. Photo by Ethan Gullet

After many successes in the Ron Westbrook Invitational, the UTSA men’s tennis team ventured to Houston to participate in the Rice Invitational this past weekend from Oct. 18 to Oct. 20.

The ‘Runners sent four players to compete at the George R. Brown Tennis Center: senior Patrick Poestinger, sophomore Alan Sanson and freshmen Joao Alcantra and Kaito Nishihara. In their opening doubles matches, pairs Alcantra and Sanson and Nishihara and Poestinger conceded defeat to opponents from the University of the Incarnate World (UIW) and University of Texas at Arlington (UTA) but continued fighting for the ‘Runners. In Draw A, Poestinger and Sanson continued, and competed against UIW’s Warren Fulgenzi and Marko Galic in an intense match, winning 9-8(7), which secured a win for the ‘Runners. Still reveling in their victory, the duo advanced, beating Texas Tech University’s (TTU) Jackson Cobb and Reed Collier in another close match 9-8(7), which totaled a two-win streak for the pair.

Meanwhile, Nishihara and Poestinger remained unwavering in their battles on an adjacent court. They engaged in a tough match against experienced opponents Solano Caffarena and Angel Diaz-Jalil, falling short, 5-8. However, not the type to be discouraged in their loss, the pair continued notching an 8-6 victory against UTA’s Daichi Akiyoshi and Miguel Cabrera. Overall, both doubles teams competed well, displaying great passion and mastery on the court.

The ‘Runners resumed their campaign for victory in singles, determined in their challenges. Sanson and Alcantra both lost their respective matches to Rice University’s Karol Paluch and Russell Conrad, compiling a 5-7 6-2 and 6-7(9) 6-2 outcome. Both players remained resilient, winning their next matches against Texas A&M University Corpus Christi players Ata Ryuya and K. Yamanaka. In his final singles match, Sanson yielded to LCC’s Mauricio Grijalva in a well-fought match. In his first set, Sanson was victorious, defeating Grijalva 6-3. However, in a comeback, Grijalva won the second set 6-3, tying with Sanson. In the final set, Sanson relented after a long and tiring match, which ended in a 5-7 loss.

Simultaneously, Alcantra played UTA’s Diaz-Jalil, losing 3-6 2-6. Poestinger was more successful in his quest, winning all three of his matches. In his first match, he opposed UTA’s Miguel Cabrera. Losing his first set, he fought hard for a win, defeating his opponent 6-3 in the next set. Cabrera proceeded to win the match after winning 6-4 in his last set. In an unusual occurrence, he won the bracket due to a walkover and a defeat after his first win, meaning that his next opponents were injured or did not show. Either way, Poestinger’s great outcome is a result of his diligent effort.

Finally, Nishihara concluded the matchplay in the tournament for the team. Resolving to keep pace with his teammates’ victories, Nishihara rivaled LCC’s Jorge Abreu, winning 6-4 4-6 6-4. The only obstacle that proved a challenge was UTA’s Daichi Akiyoshi, who swept him 1-6 1-6. In his closing match, Nishihara encountered TTU’s Justin Bloss and came out 6-4 6-3, producing a final win for the ‘Runners.

UTSA men’s tennis will return for the Intercollegiate Tennis Association Regional Championships, which will be held in Newport Beach, California, from Oct. 25 to Oct. 28.