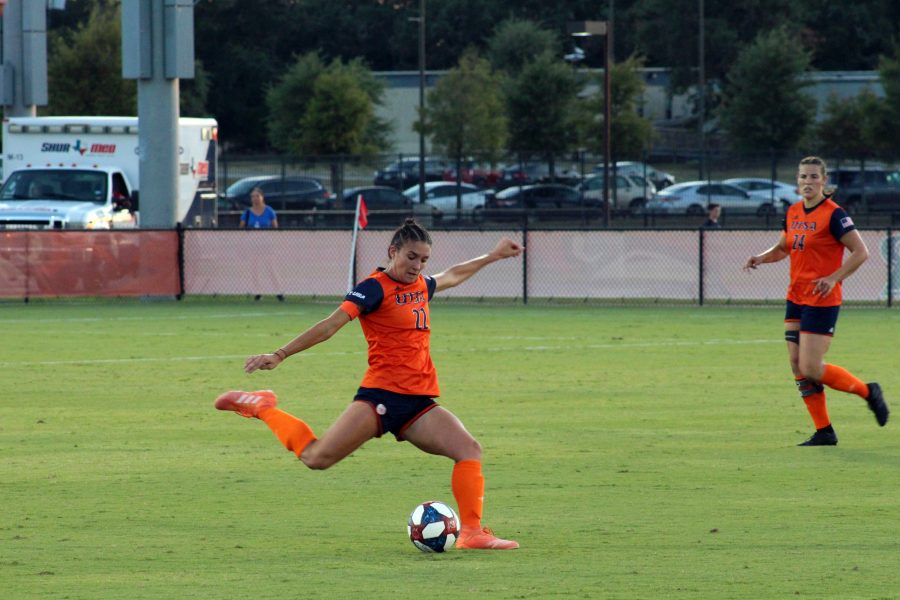 Sarah Bayhi makes an attempt to score a goal against the Lady Techsters. Photo by Julia Maenius

The UTSA Roadrunner soccer team looked to continue their winning streak during their game against the University of Southern Mississippi Golden Eagles on Thursday, Oct. 17. The ‘Runners, coming off their first conference victory with a 3-2 overtime win against Marshall University, looked to improve their 5-6-1, 1-4 Conference USA (C-USA) record.

The first half was possession-based. The ‘Runners had 10 shots, while the Golden Eagles managed eight. Lexi Bolton received a cross from Ellis Patterson but could not get enough power behind the header and Golden Eagle goalkeeper Kendell Mindnich saved the ball. Moments later, Bolton took on a few Golden Eagle defenders, and Mindnish parried the ball away. The lone goal for the ‘Runners in the first half came to C-USA Defensive Player of the Week Deja Sandoval after Patterson won a corner and crossed the ball into the box. The Golden Eagles would equalize when Ariel Diaz took on the defense and fired a rocket that made its way past Jill Schneider and into the top-right corner. Schneider came up big after the Golden Eagles won a free kick near the box and fired a hard shot towards the top corner, but she managed to get both hands on it and push the ball wide.

The second half saw the ‘Runners looking to capitalize against a strong Golden Eagle attack. The lone goal of the second half fell to Sandoval off another corner from Patterson. ‘Runners take the win against the Golden Eagles 2-1.

The ‘Runners then took on the Louisiana Tech Lady Techsters on Sunday, Oct. 20, in what would be the final home game for the senior class. The ‘Runners honored Sophie Millich, Katieann Lochte, Camrynne Hoover, Nicole Galan, Jordyn Lacy, Sarah Bayhi and Harper Luczka for their dedication to the program. The first half of the game saw both teams battling for possession. The only threat the ‘Runners could muster in the half was a cross that Lacy whipped in, but Patterson could not bring the ball down, and her header was high. The second half had a lot more chances for the ‘Runners to score. A frenzy in the box saw a ball roll to a wide-open Patterson, but she put too much effort into the strike, and the ball sailed high. Patterson fired later a shot that Lady Techster keeper Carlotta Cartelli saved. Bolton snuck past a few defenders and was one-on-one with Cartelli, but the keeper made a big sliding save.

The lone goal of the game came in when Kendall Kloza lobbed a ball from the top of the box towards the goal that ended up sailing over Cartelli and into the back of the net. With the weekend victories, the ‘Runners improved to 7-6-1 with a 3-4 conference record. The ‘Runners, riding a three-game winning streak, look to continue their strong form during their upcoming road trip to Old Dominion University, the University of North Carolina at Charlotte and University of Texas at El Paso to close out the season.