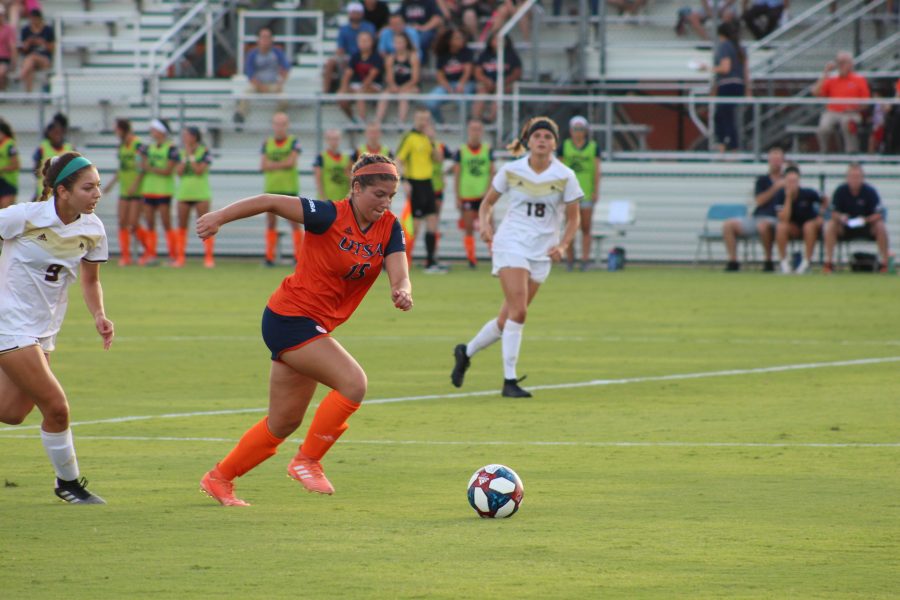 Jordyn Lacey brings the ball up the field. Julia Maenius

The ‘Runners looked forward to continuing their winning streak this past weekend when they traveled to the East Coast to take on Old Dominion University and Charlotte. The soccer team entered Friday’s game against ODU (8-3-4, 2-3-2 C-USA) riding a three-game win streak in an attempt to make a final push towards qualifying for the Conference-USA tournament in Denton. The game, however, did not go according to plan.

The ‘Runners fell 3-0 to the Monarchs and 7-7-1, 3-5 in C-USA. The first half was quiet for the ‘Runners, who only put up two shots, while ODU managed to get off 15 shots — luckily, no goals were allowed. However, the wheels came off in the second half. In the 53rd minute, Allie Brimmer put ODU on the board with a goal from the top of the box that found the far corner. Seven minutes later, Kyra Ricks added the second goal for the Monarchs when she took the ball from the ‘Runners and smashed the ball over Sophie Millich, off the crossbar and into the back of the net. The Monarchs sealed the victory with a goal in the 77th minute.

The Runners looked to bounce back on Sunday when they traveled to Charlotte (12-3-0, 7-1-0 C-USA). In the 15th minute, the ‘Runners used excellent teamwork to pass the ball around in the box and get a shot off, but luckily, the rebound off the keeper’s save was not cleared and Isa Hernandez pounced on it and gave the ‘Runners the 1-0 lead. The 49ers would tie the game in the 74th minute, from a corner kick that was not cleared when Maddie Bragaw flicked the ball into the net. A minute later, the ‘Runners scored the game-winning goal. Lexi Bolton fed a corner kick into the box, and after a series of touches, Harper Luczka got a foot on the ball and found the net for her first goal of the season. The Roadrunners improved to 8-7-1, 4-5-0 C-USA and handed the 49ers their first loss since week one of C-USA action, snapping the 49ers seven-game winning streak and keeping the ‘Runners’ hopes for a birth in the C-USA tournament alive.

The ‘Runners return to action for their final game of the year on Friday when they travel to El Paso to take on UTEP. A win against the Miners would put UTSA ahead in the standings to secure the final 8th spot in the C-USA tournament. A win against UTEP, followed by losses or draws from both Middle Tennessee and Louisiana Tech, would all but guarantee UTSA a spot in the tournament.