Beauty in the light 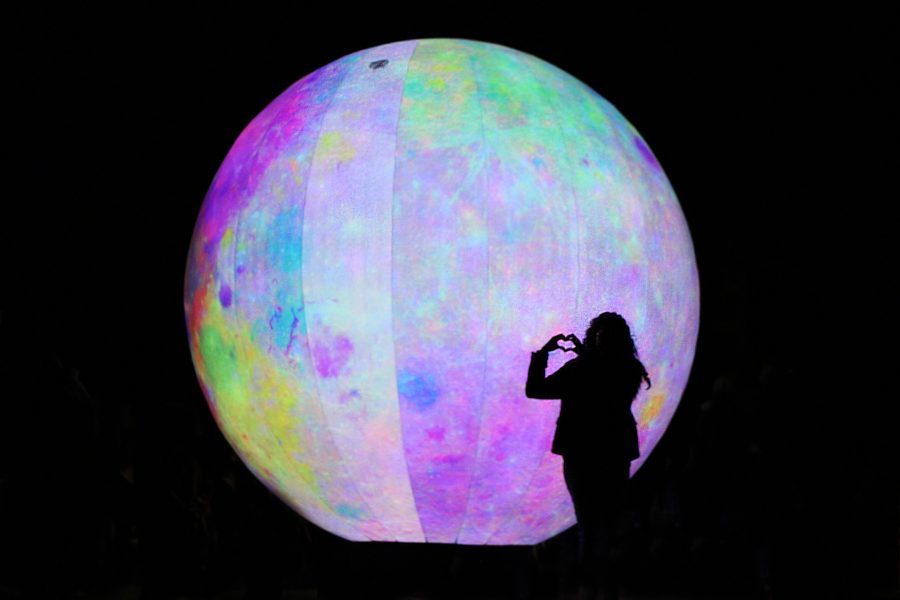 In the midst of light shows, art exhibits and spectators, a dancer and a violinist put on a performance that set the tone for the Luminaria Contemporary Arts Festival. Under an archway decorated with greenery and warm lighting, the two artists drew in a crowd with their rendition of “The Swan” by Camille Saint-Saëns. The dancer engaged in expressive dance in her long red dress, while the violinist created charming sounds which garnered unanimous admiration from the audience. The captivation of spectators was inevitable during the festival, and this trend continued throughout the night.

Upon entering the festival, a blown-up, multicolored projection of the moon welcomed the crowd and quickly became a popular photo-op stop. Luminaria’s welcome booth displayed a jam-packed schedule for the evening. There was an event for everyone, ranging from local to international guests. Artists, musicians, sculptors, actors and more showcased their mesmerizing work.

Just past the somber violinist, a group of colorful piñata-dressed people danced and took photos with pedestrians. Every few steps, the mood shifted from a robotic-dancing duo to a bluesy guitarist — with an actual blue guitar — to an animal rights demonstration consisting of two people in Guy Fawkes masks holding screens that silently depicted the cruelty of farming. The festival remained true to its name as it included many light shows and a contemporary glow-in-the-dark artist known as @trebla_art on Instagram.

“I love to come see my town out; we’re so friendly with one another. We have a fantastic way of communicating through events like this,” Berlanga said.

Despite enjoying the event, Berlanga laments over the festival’s diminishing size.

There was an art installation across the walkway: a net dome covered in lights. Akirash, the featured artist, intended for pedestrians to rest or meditate inside. Contrastingly, next to this unit, an exuberant game of Lotería, a staple of San Antonian culture, was underway. Manning the table was Xelena Gonzáles, a featured artist from 2018.

“This year I am a recipient of the NALAC award — National Association of Latino Arts and Culture,” Gonzáles said. “My writings are all based on the Lotería images. They’re divination cards and affirmations and animal medicines. So I created a new meaning for [Lotería].”

The open gallery was right next to the exhilarating game of Lotería. As spectators walked in, they were greeted by a long stairway leading to an abstract artist whose prerogative was working with his hands underneath a camera, shifting translucent paper shapes to classical music. Although the music was intense, it was as if he was moving in slow motion as he strategically placed the different cutouts across the paper with backlighting. The audience had the privilege of watching him construct his art, letting each pair of eyes in on his raw thoughts. His ability to work under immense pressure was profoundly admired by those who tuned in to see his results.

Across the way, the main stage was electric. Artist Kdotla introduced her final song for the night, “Let Me Dream,” which is an anthem for those whose dreams are viewed as farfetched. Kdotla’s stage presence affected the crowd; people were dancing and chanting along with the catchy, relatable lyrics.

“This is my first performance [at Luminaria],” Kdotla said. “Last year, I actually came to just enjoy it, and it just happened that they asked me to be a part this year.”

After moving to San Antonio for business opportunities, Kdotla seeks to expand and connect with her audience.

“I think we get lost in the lights and performance part of it, and we lose sight of what really matters, and that’s connecting with the people. I enjoy that a lot.”

At the end of the night, an electric violin sounded through the speakers that lined the archway. People from all over the festival were immediately enchanted by Dixon’s Violin. Dixon prefaced by explaining that he traveled 1000 miles to perform for the fourth time at Luminaria. As soon as his bow touched the violin’s strings, he proved that his passion for music and self-expression fueled his improvisational playing. He prefaced his performance with a beautiful sentiment: “By my heart and soul and my intention to share it with you.”

His performance continually evoked emotions from the audience, with a slow and melancholic start to an ending full of angst. In one of his songs, he started with pizzicato and built it up with the loop pedal to create a mellow sound. Dixon’s violin connected him with the spectators; he reminded the audience that they should unapologetically express themselves because “everyone is weird.” As he finished pouring every fiber of his being into the music, he explained the methods behind his process of playing.

“I don’t really play songs — I try and get out of my own way and see what comes out,” Dixon said.

Dixon’s persona was full of undying authenticity, and it was a common observation amongst each featured artist at Luminaria. This event sheds light on a plethora of multifaceted, talented individuals, giving them the exposure they have worked so hard to attain.