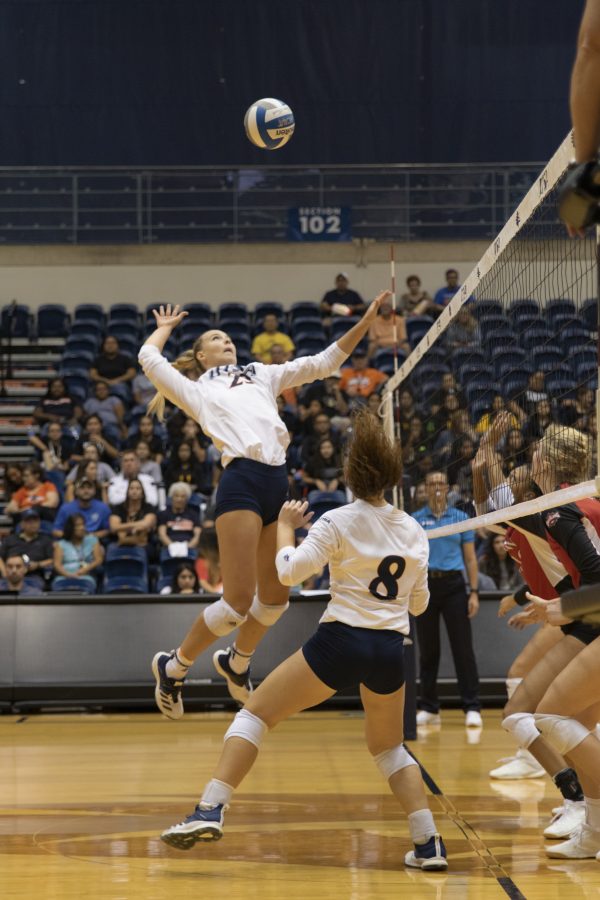 Madeline McKay swings at a set from Courtney Walters. Photo by Lindsey Thomas

The UTSA Roadrunner volleyball team (15-10, 8-4 C-USA) hosted the Middle Tennessee State University Blue Raiders on Sunday, Nov. 10, closing in on their 14th winning season under head coach Laura Neugebauer-Groff. The ‘Runners swept the Blue Raiders in three sets as they near the Conference USA championship tournament.

The ‘Runners began the match with an early lead by forcing the Blue Raiders to record four back-to-back passing errors. The Blue Raiders tied the game 8-8, trading the next plays back and forth before sophomore right side hitter Bianca Ejesieme claimed the set, 25-19, with a kill down the line. Brianna McCulloch recorded a .389 hitting percentage in her first setback coming off an injury.

The second set mirrored the first with both sides tied at 6-6. The ‘Runners claimed 19 of the next 28 points by forcing consecutive passing errors by the Blue Raiders. Sophomore outside hitter Hannah Lopez and freshman setter Courtney Walters led the offense in the second set. Walters pushed the ‘Runners into the lead with multiple service aces. Freshman middle blocker Jenna Patton claimed the win for the ‘Runners to end the second set, 25-15, going into intermission.

The Blue Raiders claimed their momentum in the third set, forcing a ‘Runner time out early in the set. The ‘Runners recorded a 10-4 scoring run to put them back in the lead for the match’s duration. The ‘Runners forced multiple passing errors with their front-row presence. The ‘Runners ended the third and final set 25-19.

The ‘Runners will be returning to the Convocation Center to face the Rice University Owls Thursday, Nov. 14, for the last home game of the season.