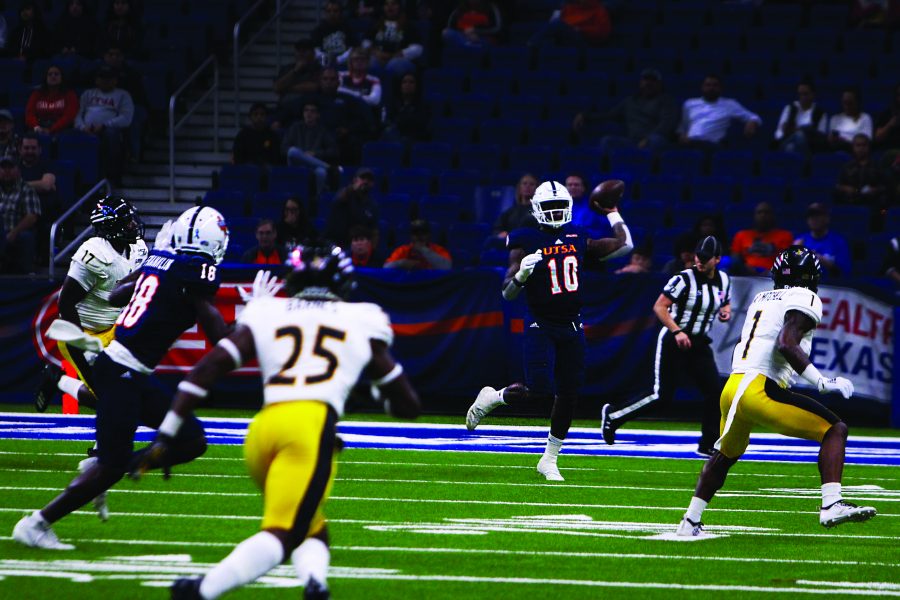 In front of a lot of people dressed as empty seats, the UTSA Roadrunners (4-6) entered their sixth meeting against the University of Southern Mississippi Golden Eagles (7-3).

The action started early as Southern Miss used an up-tempo style to tear into the Roadrunners defense and take a quick 7-0 lead. UTSA responded in-kind with speed of their own from Joshua Cephus as he took a Lowell Narcisse pass 75 yards and evened the score at 7. Both teams traded punts and field goals back-and-forth until Southern Miss running back De’Michael Harris scampered for 56-yard touchdown run with two minutes left in the first half to give the Eagles a 16-10 lead going into the half.

The six-point deficit continued to fluctuate throughout the second half but the ‘Runners could not produce enough offense to cut into the Golden Eagles lead. Southern Miss quarterback Jack Abraham connected with Quez Watkins for a 77-yard touchdown pass to keep UTSA at a distant 23-10.

After a flurry of turnovers, including an interception from Narcisse and fumble from Sincere McCormick, the Roadrunners put together a seven play 91-yard touchdown drive that concluded with a 51-yard strike from Narcisse to Carlos Strickland II to draw the Roadrunners within striking distance and give the empty AlamoDome some life.

The final two stabs at the heart came in the form of another 33-yard touchdown run from Harris to extend the Eagles lead to 29-17. After an exchange of punts UTSA began a drive in the shadow of their own goal post that ultimately solidified the result of the game. The three-play three-yard drive that included a seven-yard sack that put the Roadrunners on their half-yard line. If fans hadn’t left then, the final straw came moments later when backup running back Kevin Perkins gashed the UTSA defense for a 39-yard touchdown and ended all hope of an upset.

The few fans that remained filed out of the AlamoDome with the sour taste of a 36-17 final score.

Head coach Frank Wilson addressed his defense’s ineffective performance, “We wanted to challenge them to have long drives,” said Wilson. “It was the intermediate-short passes and the run after the catch that caused. In the run game, a misfit here or a missed tackled here and a guy went the distance.”

“Good isn’t good enough at this point.” Said Narcisse. “We still lost by three scores so, I mean that doesn’t make up for anything.”

The Roadrunners fall to 4-6 overall and 3-3 in conference with two games left in the season. UTSA must win both games against Florida Atlantic University (7-3) and Louisiana Tech (8-2) to become bowl eligible and they have their work cut out for them according to Coach Wilson.

“Get to five,” Said Wilson. “FAU comes in our stadium next week for senior day. We need to play to the best of our ability constantly against one of the better teams in the east of our conference. We will have our work cut out for us and so a lot of preparation will be needed.”