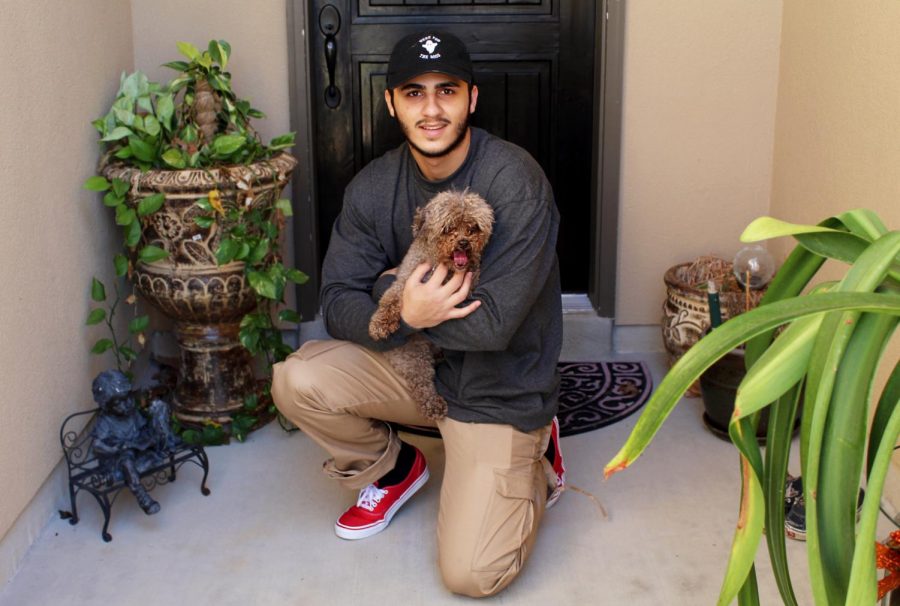 Faisal Najjar is a third-year biomedical engineering major who began drawing and painting a year ago. He is a firm believer in the power of art and is passionate about showing viewers that they can surprise themselves with their hidden abilities. Najjar often finds himself lost in his own world when drawing or painting. He enjoys the idea that you can create something just by picturing it in your head.

Q:What is 1your background as an artist?

A: I went to my cousin’s house in California, and I saw that he drew a lot, so I started drawing. I was not that good at it, but every now and then I would draw something I really liked. As soon as I saw my cousin painting, I thought to myself, “I could do that.” I would mimic stuff that I saw him do, he does a lot of cartoon style paintings.I am trying to get better and branch out everyday.

When I want to paint, there has to be an emotion attached to it. If I am painting something and I just don’t want to anymore, I’ll stop that painting and start something else. That is why I have so many paintings unfinished; I am only going to paint something when I am in the mood to paint it. I painted a portrait for a friend who was dealing with the death of a loved one and I got so lost in that painting because I wanted to do it so badly. Sometimes, with commissions, I will just paint because I feel forced to do it. With the portrait, I put on music and I wasn’t even worried about anything — I just kept going and going. It came out perfect. When I painted one of my favorite pieces, I was so lost in it that I didn’t realize it had been four hours of listening to the same song on repeat.

Q: Is there a piece that you are most proud of?

A: The “Dumbo” one is probably my favorite one because I spent so much time on it. If you look closely at the painting, the blue elephant on the left has a bump on the nose from the layers of paint because I messed up so many times. There are some paintings that take so much extra work, but I have no problem doing it because I want them to look good.

Q: Where do you find your inspiration?

A: I’d say my inspiration comes from my own interpretations of different kinds of art. I like to look at things and make them my own. I love looking at the art before the piece is even finished. Pieces from Michaelalngelo that weren’t finished are really crazy to look at. See, a lot of people do not like Jackson Pollock because it looks like he’s just spilling paint. The reason I like his art is because he takes something that looks like virtually nothing, and makes it so pleasurable to look at. I try to dig into that and figure out what he does. I question the colors, the lines and the layers in each and every piece I analyze.

Q: Do you think that art should influence political, social, religious or environmental issues?

A: Art doesn’t have to be influential. It is just about what the artist wants. If it ends up being influential, it’s not on the artist. They drew it because that’s what they felt. Someone could throw ice cream on the ground and it could end up being political somehow. Artists try to portray what they’re thinking, and it is up to the person who is looking at it to dig deep. Interpretation is up to you.

A: Art is not being able to say something, so you just draw it. Art is feeling young even though you are getting old. I want to stay as child-like as possible when it comes to my imagination. The first thing you learn as a kid is expressing yourself. You are taught to put drawings on paper, and you are constantly adding coal to your imagination.

Najjar plans to continue his favorite hobby and would love to incorporate his art into his future career as a biomedical engineer.