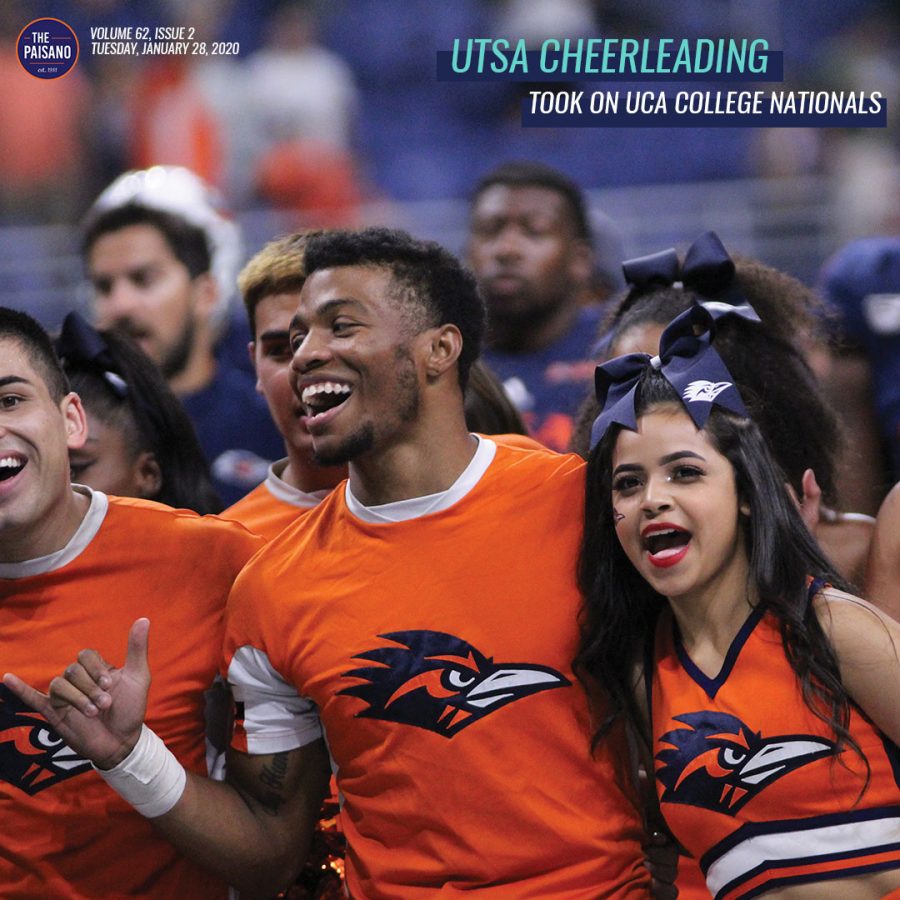 Jade Richey finishes a cheer on the sideline of a football game. The cheerleading squad is preparing for the NCA competition held in Daytona, Florida.

The teams earned their way to the championships by placing third with their qualifying video that was sent to judges a few months ago. The teams had a great learning experience they can take into the Daytona season coming up in April. Both the co-ed and all-girl teams placed in the top five in Daytona in their 2019 season.

Going into their spring season, the teams are excited to compete in Daytona and Orlando, but they’re also intimidated because of the vast amount of colleges and universities that qualified to compete. Both teams rank in the top five when competing in Daytona, placing the bar high for the Roadrunners.

“It’s usually something that is very interesting to see people get really excited for … and other people make it a little bit more of an intimidating thing,” Ortiz said. “Usually, we are ranked top five in Daytona at NCAA, so knowing that we have room to grow has really been pushing us to get our skills better and made us a little bit more accountable on each other and [we] have been able to evolve since last year.”

The team has been focusing on conditioning, both physically and mentally, to prepare a routine that hits every stunt perfectly so they can earn every point during the competition.

“What I am most looking forward to at Daytona is being able to compete with my teammates and seeing what we worked towards all year finally pay off because we only get to compete one time,” junior flyer Bridget Alvarez said.

With a higher skill set than previous years, paired with this year’s choreography, the team is aiming for a top-three spot in Daytona.

“On top of two-and-a half-hour practices three times a week and hour-long strength and conditioning workouts twice a week, we also have to do work outside the gym to make sure we are keeping all of our skills,” senior stunter and tumbler Andres Vazquez said.

During other sports’ seasons, the squad prepares for competition by using the game-time atmosphere to perfect their skills.

“Being in front of a large crowd and doing what we normally do as cheerleaders, skills wise, definitely helps us prepare,” Ortiz said. “There’s not an intimidation factor going into it whenever you see a whole bunch of people staring at you. Being able to provide for our football, basketball teams and every team that we cheer for gives us a heads up in the game day division that we do as well.”

Preparing mentally to hit zero, the squad works with their teammates to build a relationship that resembles a family.

“We know each other’s talents. We know how good we are and how good we could potentially be [with] the support from building your family since freshman year,” junior tumbler Grace Grant said.