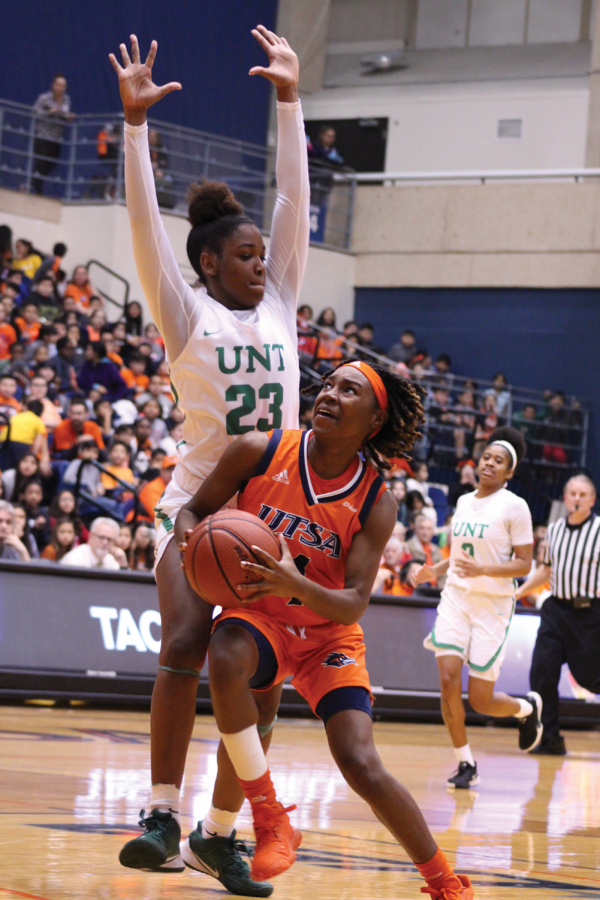 Mikayla Woods drives around defenders to the rim with the ball. During a game against the University of North Texas on January 23, the ‘Runners fell to the Mean Green, 55-79.

Currently, there are three ‘Runners who are each averaging double-digit points, with Mikayla Woods leading the team in points, averaging 15.7, and Adryana Quezada and Karrington Donald with 13.1 and 10.0, respectively. This season, Timea Toth has been leading the ‘Runners in rebounding, with six per game. Evelyn Omemmah and Quezada are not too far off, averaging 5.7 a game.

During the game between the Owls and the ‘Runners, Woods lead a resurgence with 21 points in the fourth quarter in a failed comeback attempt. This scoring feat helped her claim a third Conference USA freshman of the week award this season.

The UAB Blazers are currently on a four-game win streak and have beaten their competition by 14.5 points per game in the last four games. The UAB Blazers’ leading scorer Rachael Childress has been averaging 17.4 points per game, and their leading rebounder, Angela Vendrell, has averaged 7.9 rebounds per game.

The last game of the ‘Runners road trip will be against the Blue Raiders, who are coming off a divisional win and sitting fourth in Conference USA. Currently, the Blue Raiders have four players who are each averaging double-digit points, with Anastasia Hayes leading the team with 17.2 points per game.