Athlete of the Week: Deja Cousin 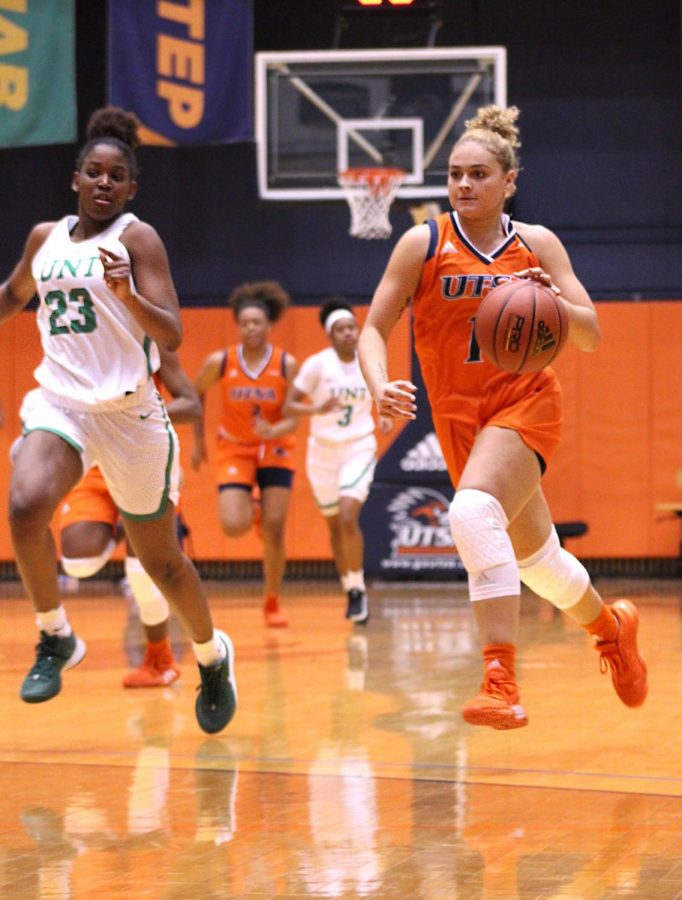 Deja Cousin dribbles the ball up the court to reset the Raodrunners’ offense. The team faced the UNT Mean Green on Thursday, Jan. 23.

Senior guard Deja Cousin aided the women’s basketball team for four years. She is a strong shooter and brings a tough defensive presence to the team.

The psychology major began playing basketball when she was young, following in her parents footsteps by becoming a collegiate ball player.

“I was five when I first started playing,” Cousin said. “I come from an athletic family with an athletic background. Both of my parents played in college and went overseas and played professionally. My older brother plays, I played and my two younger brothers play, and they are really what’s driving me to keep going.”

Playing over 100 minutes in her junior season, Cousin secured her position as an unparalleled name on the women’s basketball roster in her final season at UTSA.

“I chose UTSA because I wanted a family atmosphere,” Cousin said. “The coach that was here at the time actually coached my mom in college, so when he first started recruiting me, I felt safe and at home. I committed here when I was a sophomore, so I was happy that I didn’t have to deal with the major AAU [Amateur Athletic Union] tournaments and everything.”

To keep her mind sharp on the court, Cousin uses pregame rituals to keep her focused and ready to compete.

“Every game day, I wear fuzzy socks to stay comfy,” Cousin said. “I have to chew gum, and I have to listen to my basketball playlist.”

Outside of basketball, Cousin uses her free time to relax and indulge in her other interests.

“I sing for fun—not many people know that,” Cousin said. “I like to play with my dog and watch movies.”

The native of Burlington, North Carolina, pulls inspiration from those closest to her.

“My mom inspires me,” Cousin said. “She moved to the U.S. from New Zealand when she was very young. She was 17, and to be able to create a whole new life and keep pushing even though she is really far from her own family is what really inspires me.”

In her junior season, Cousin recorded a season high of three three-pointers against Utah State in the team’s pre-conference schedule.

She notes the Utah State game as the most monumental moment in her career thus far.

“I wasn’t really playing a lot throughout my career, but I came in and had the mindset to keep pushing,” Cousin said. “I hit really big shots towards the end of the game, and I think that has been a really big moment in my career.”

Cousin’s appreciation for the program reaches further than the locker room. Her favorite part about competing for UTSA is its fans and supporters.

“The fans that we have are very supportive and very loyal,” Cousin said. “They come to every single game. They have been here since my freshman year.”

As one of four seniors on the roster, Cousin and her teammates have made an impact on the attitude of the program by welcoming newcomers to the team.

“We definitely had to step up big time,” Cousin said. “Over half of our team is new, and I would like to say [I am] more of a sister because you can help guide. It is more than basketball to us, and being able to help on and off the court by setting an example shows that you are leading that way.”

With conference play currently underway, Cousin’s final season at UTSA is reaching a close. She recognizes the impact basketball has made in her life as an athlete and student.