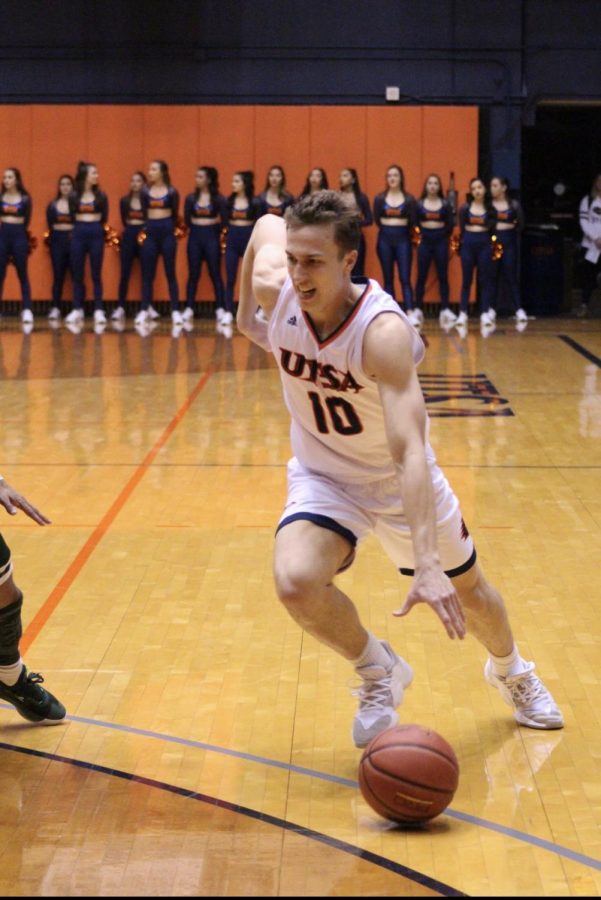 Eric Czumbel drives past the defenders to the basket. The ‘Runners dropped the game to the Middle Tennessee Blue Raiders.

Jackson and Wallace continued to shine. Jackson continued his torrid scoring pace, putting up 20 points against UAB and delivering a 32-point performance against the Blue Raiders, maintaining second place in the nation for points per game. Wallace scored 26 against UAB to lead the ‘Runners in scoring and 22 against the Blue Raiders. Senior forward Byron Frohnen set the UTSA career records for rebounds and career starts.

The ‘Runners fell behind early against the Blazers, but a block followed by a step back 3-pointer from Wallace late in the half would spark a UTSA rally and a 17-7 run, entering halftime with a 36-34 lead. An 8-2 run midway through the second half opened up an eight-point lead for the Blazers. Wallace scored 12 straight points down the stretch for UTSA, but the ‘Runners’ baskets missed in crunch time were their undoing. In the battle on the glass, UTSA was dominated by the Blazers in the rebounding column 42-24 and 14-6 in offensive rebounding.

Against the Blue Raiders, freshman center Jacob Germany made his first career start and instantly capitalized, throwing down a huge alley-oop off the feed from Wallace to start the game as UTSA raced out to a quick 11-2 lead. A hot shooting Blue Raiders squad jumped out to a 48-36 lead at halftime. Jackson and Wallace would score the first 17 points of the second half for UTSA to draw them back within two points. A 13-0 run by the Raiders extended their lead back to double digits midway through the second half. UTSA rallied and tied the game at 80-80 with 15 seconds to go. A UTSA foul on a Blue Raider three-point attempt as time expired led to three free throws, and UTSA was unable to get another shot off, handing them an 83-80 loss.

UTSA must pick up these two wins on the road for a better seeding position. Both games will broadcast on ESPN+.