Athlete of the Week: Timea Toth 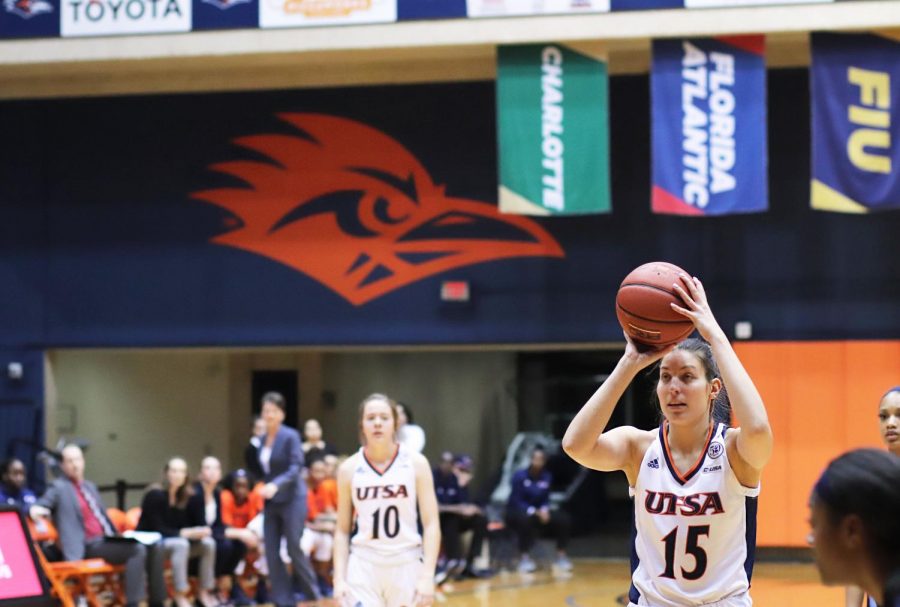 Timea Toth shoots a free throw after being fouled. The Roadrunners dropped this game to the Monarchs, 43-62.

from Dunakeszi, Hungary, has been a consistent presence on UTSA’s women’s basketball team for four seasons. Standing at 6-foot-1, she provides a great defensive effort for the team, consistently blocking shots and stealing the ball from opponents.

Toth started playing basketball in Europe at the age of 10. She began her career playing on club teams and made her way to the college level after UTSA’s scouts visited her in Hungary.

“I really liked the coaches,” Toth said. “They were really nice to me, and the way they talked made me feel like they really wanted me to be here.”

Illinois and Memphis were also involved in Toth’s recruitment process, but she chose UTSA because of how comfortable she felt with the school and program.

Toth does not have any specific pregame rituals, but she enjoys encouraging her teammates while simply having fun in the game she plays. Her favorite moment of her UTSA career was a game from last year.

“I remember we had a game against San Diego, and they were a really good team,” Toth said. “We came back and we won the game. It was awesome.”

When asked about what the best part of playing for UTSA has been, she said, “It’s my team for sure. Here, they are my family. I just love these girls. I love spending time with them and playing with them on the court.”

Toth has leaned into a leadership role and tries to be there as much as she can for her teammates.

“I feel like we have a lot of freshman, and because we have a great relationship with them, they look up to us and feel free to come to us for help,” Toth said.

Since Toth’s life has been dedicated to basketball, she has had the opportunity to learn from the sport and grow.

“It’s taught me to grow for sure, especially to know that I have to manage my time and focus and know what my number one priority is,” Toth said.