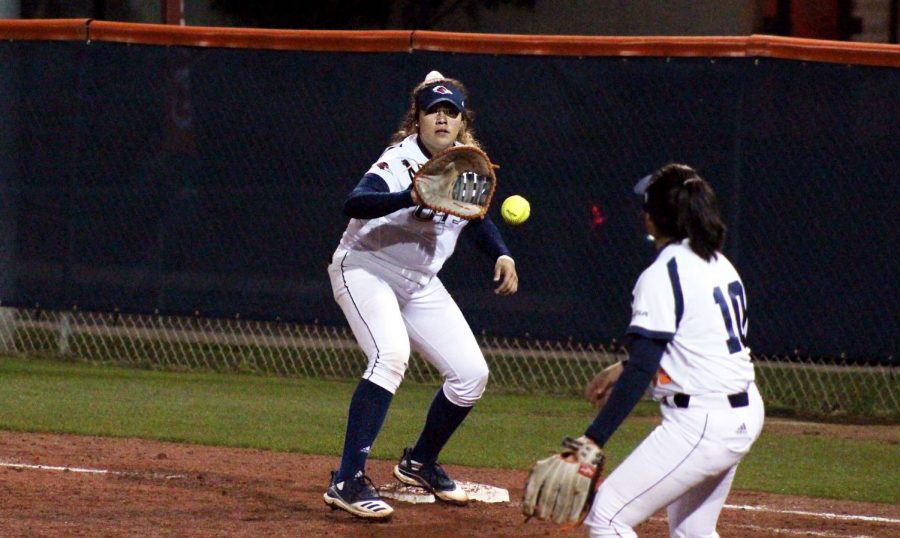 Victoria Villarreal catches a throw from Clarissa Hernandez. The ‘Runners went 3-2 in the Bobcat Classic.

The UTSA Roadrunner softball team (4-2) headed to their second tournament to take on the Texas State Bobcats, the Wichita State Shockers and the Saint Louis Billikens in the Bobcat Classic.

The ‘Runners’ first game of the Bobcat Classic took place on Feb. 13 against the Bobcats, where the ‘Runners suffered a close loss. The Bobcats were the first to strike, but the ‘Runners did not let that lead last long, as Celeste Loughman, in the third inning, picked up a run after Kindell Brooks hit a fair ball to first. The Bobcats picked up another run in the fourth, and in the fifth, Reily Grunberg matched their score by hitting a homerun. In the sixth, Lauren Coerver also hit a homerun, but this time, the Bobcats matched with a homer of their own. Going into the seventh, the score was tied 3-3, which put pressure on the ‘Runners to score since they were first to bat. The ‘Runners were unable to score in the seventh, and the Bobcats stacked the bases, resulting in a score and a 4-3 win.

The ‘Runners struggled in their next game against Wichita State, allowing the Shockers to score twelve runs, while they only scored one. The ‘Runners started this game off with a score by Loughman. However, that was their only score of the night. The Shockers controlled the rest of the game and managed to rack up twelve scores.

The ‘Runners finished the Bobcat Classic with a 3-2 record and will prepare to go to the Boerner Invitational, where they will take on the Kansa Jayhawks, UT Arlington Mavericks and Rutger Scarlet Knights. These games will take place in Arlington, Texas, from Feb. 21 to Feb. 23.