A conversation with Shea Serrano 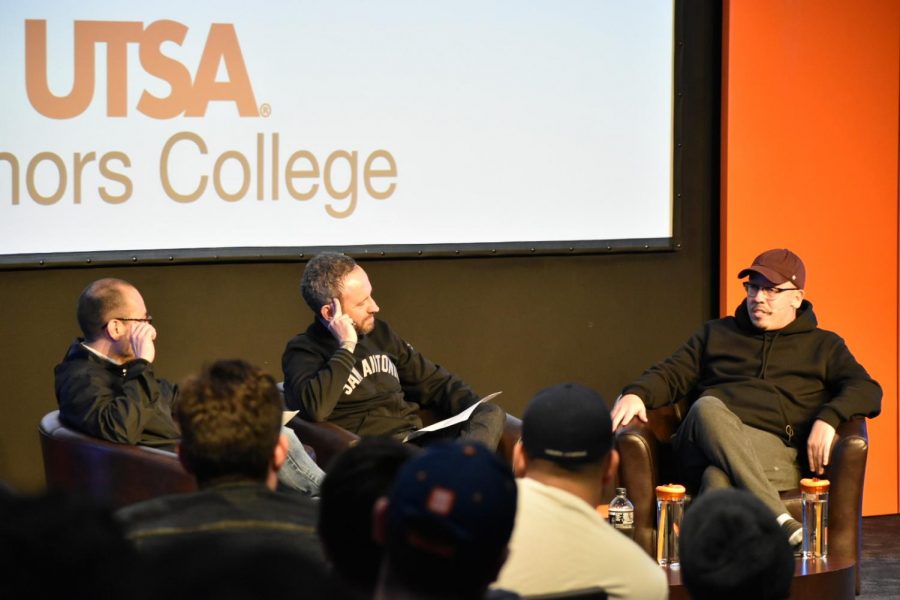 Three-time New York Times best-selling author Shea Serrano visited UTSA on Feb. 18 to share his thoughts on writing, white-washing in the publishing industry and more. The Honors College hosted the event as a part of their “A Conversation With … ” series.

Serrano was raised in San Antonio in a community where almost half of the students didn’t graduate high school and the majority of residents were on some type of government welfare. He was no stranger to this hardship — he grew up on food stamps and his childhood homes were foreclosed on. Before he could become a product of his surroundings, he left.

“I felt like [I was] watching the neighborhood eat up a bunch of my friends, eat up members of my family. It was cool to get in trouble, awesome, and then you get to 10th grade and it’s like, oh, they took him to jail,” Serrano said. “This is, like, a real thing … And that’s why I left. That’s why I was like, ‘I’m never gonna go back.’ Because all my family lived right there, and I was like, ‘If I go backward, if I go back to that, it’s gonna get me, too,’ and I was terrified of that.”

He moved to Houston after high school but came back to San Antonio to raise his family, determined to make his kids’ childhoods look different from his own. He was able to do this because of the success of his writing career.

That success didn’t come quickly. His first writing gig was a sports column for a neighborhood newsletter in Houston. Soon after, he pitched his work to the Houston Press, where he established himself as “the Houston rap guy” before moving on to write for MTV. He continued to move up the ranks until he eventually reached the level of success and acclaim he has today.

“It’s going to be bad in the beginning, and you’re not gonna know how to do it but only because you’ve never done it before … That’s what I experienced the most in the beginning: ‘I’m not any good at this at all. I don’t know if I’ll ever be good. I’m just gonna keep on trying.’ That’s the main thing that separates somebody who’s successful from somebody who’s not,” Serrano said.

In 2015, “The Rap Year Book” was Serrano’s first book to hit the New York Times Best Seller list. His next two books, “Basketball (and Other Things)” and “Movies (and Other Things),” both hit the number one spot on the list in 2017 and 2019, respectively. He is the first Mexican-American to have three books make the New York Times Best Seller list. Serrano took pride in his accomplishment but was frustrated he was the first to receive this accolade for a 90-year-old list, considering “American Dirt,” a novel about a Mexican family crossing the border written by a woman of non-Mexican descent, reached number one on the list.

“There’s a bunch of angry Latinos and Latinas who are like, ‘Hey, we’re trying to sell our work, too. Give us some money. We want to tell our own stories. At least let us do that,’” Serrano said.

Serrano notices this discrepancy of race representation in publishing now more than ever as a high-profile author.

“Publishing is extremely, extremely white. It’s white, and it’s affluent … When I walk in the room for the meeting [for “Movies (and Other Things)”] and they have all their PR people there or whatever, I sit down — it’s one of those long tables — and there are 12 people, and every other person is just a white person,” Serrano said. “Maybe there’s a black person in there, maybe. That was it. And I’m like … ‘This is not cool. Can I get one?’”

Ensuring his new-found fame doesn’t go to his head, Serrano gives back to the community regularly. Most recently, he raised $25,000 for Martinez Street Women’s Center through Twitter donations.

“I do that mostly because when I was teaching, I was able to have these interactions pretty regularly that made me feel important to the community, and in writing, I don’t get to. I don’t get that opportunity,” Serrano said.

From basketball fan to philanthropist to best-selling author, Serrano’s dedication and heart behind whatever project or sports team he’s advocating for is a light San Antonio wouldn’t be the same without.